University of Alabama at Birmingham (UAB) School of Nursing alumnus Blake Smith, MSN, BS, RN, is President-Elect of the American Association for Men in Nursing, which shapes practice, education, research, and leadership for men in nursing. At 32 years old, he will be the youngest president in the 44-year history of the association.

Smith, a Clinical Documentation Senior Analyst for Nebraska Medicine, was recently featured in a POLITICO video promoting the nursing profession as a premier choice for men. 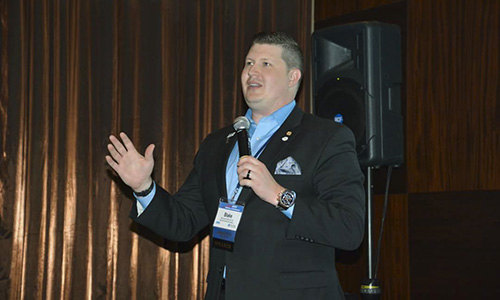 “Men should consider going into the nursing profession because it is one of high reward and integrity,” he said in the interview. “The reason I went into nursing is because I am searching for something that is going to be fulfilling, where I can give back to the community. Nursing is one of those professions.”

In addition to his national leadership in men’s health awareness and advocacy and male inclusion in the nursing profession, Smith serves on the Nebraska Action Coalition’s Diversity Task Force and Leadership Committee. He is also the first chair of The Robert Wood Johnson Foundation (RWJF) New Careers in Nursing (NCIN) National Scholar Network Steering Committee.

He said he chose the UAB School of Nursing for its combination of faculty, superior curriculum and culture.

“UAB develops future nurse leaders through innovative teaching methods that simulate real world scenarios,” he said. “They understand that the current generation of nursing students learn by doing, not watching or listening.

“To be a nurse leader in today’s health care world, you must have a combination of business and nursing expertise, along with true understanding of the power of professional interdisciplinary approaches to be successful in solving complex health issues,” he adds. “UAB is that innovative university—understanding that for nursing to keep up with the ever-changing needs of our communities, we must seek out individuals to lead with character and integrity, and not by gender or race.”

Smith earned his Master of Science in Nursing (MSN) degree in Nursing Health Systems Administration from the UAB School of Nursing in 2017. He received the 2017 Outstanding Graduate Student Award and was a senator for the Nursing Graduate Student Association during his time as a graduate student.
Read 3456 times Last modified on March 22, 2019
Tweet
Tagged under