Brothers graduate together for BSN 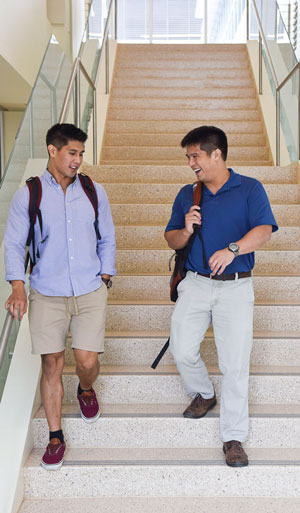 Brothers Chad Mendiola (left) and Carl Mendiola are 10 years apart in age, and both are graduating with their BSN on August 11.

“For me, honestly everything felt like it fell into place, so I hadn’t given it much thought until I picked up my gown and saw our names right beside each other,” said Chad Mendiola, the younger of the two brothers. “That’s when it hit me, that we’re both getting this degree, we’re graduating together.”

With a dad who is a physician and a mom who is a nurse, Carl and Chad Mendiola always planned to enter the medical field. They started out as pre-med, but both transitioned to nursing.

“I was here long before Chad was,” Carl Mendiola said with a laugh. “I’m proud that he’s gotten to this point a lot faster than me. I took the long way around because I originally graduated from UAB with a degree in biology, then worked as a phlebotomist, got my Associates Degree in Nursing at Jefferson State, and then came back for my BSN.”

During his time as a phlebotomist, he realized the impact nurses have on patients and their care and chose to make a career change. Nursing is also more personal, Carl Mendiola said, which made it a better fit.

As a pre-med student, Chad Mendiola said one of his classes served as the turning point toward nursing.

“In that class, I realized that in terms of providing care, the mindset of physicians and my mindset were completely different, but I saw similarities between pre-nursing students and myself,” he said. “I started shadowing nurses and realized they actually understand patients on a different level than physicians. Nurses cared about helping the person, rather than just solving a problem.”

Having a brother in nursing helped, Chad Mendiola said, as he could learn from his older brother’s experience.

“In every sense of the phrase, Carl has been a role model for me. I’ve learned from his mistakes and his victories, and that’s what big brothers are for — to make your mistakes for you,” he said. “My mom is also a role model, so I talked with them about changing my degree and found that nursing was what I was meant to do.”

All throughout their education, Carl and Chad Mendiola said their family, including their sister Charlene Mendiola, have been nothing but supportive. They even have a family group text where they can talk through questions and learn from each other.

“We’ve always been able to learn from our parents, too, as far as the situations we encounter,” said Carl Mendiola. “If we’re learning something in case, we can always go to them with questions. And when Chad comes to me with a question, it’s a nice refresher. Honestly, we couldn’t have done without our family. As far as support goes, we couldn’t ask for anyone better.”

“Our parents have undying loyalty, and they have supported us through everything — especially when we don’t deserve it,” Chad Mendiola said in agreement. “It’s amazing. We’ll never be able to pay them back.”

Though their paths to BSN were different, both brothers plan to pursue their Master of Science in Nursing. Their next steps will be different as well. 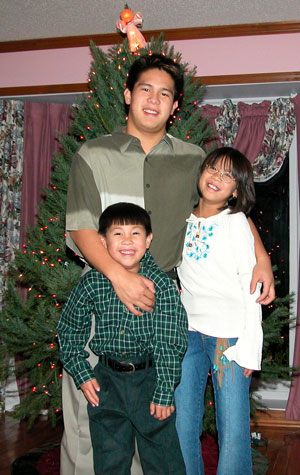 Carl and Chad Mendiola with their middle sister, Charlene Mendiola.

“After graduation, my main goal is to keep learning. I need to learn so much more at the bedside that I wouldn’t ever be able to learn in the classroom,” he said. “Before I return to become a nurse practitioner, I want to have that clinical experience and be able to apply what I’ve learned in practice later on.”

“A lot of people say that the emergency room is a young man’s game, and I get that, but I can’t see myself doing anything else for the rest of my life,” Chad Mendiola said.

Carl Mendiola works in UAB Hospital’s OR and was recently promoted to ENT surgery team leader. He is determining what step to take next in pursuing his MSN.

“Right now, I’m working to figure out if I like the management or hands-on side more,” said Carl Mendiola. “Being 10 years older than Chad, I’ve got to take that into consideration. That acute care lifestyle sounds appealing, but I’m looking for where I can make the most impact and still be an influence to people at home because family is looming for me, too, and I’ve got to think about that too.”

No matter what the path ahead looks like, Carl Mendiola said they know one thing.

“We still have at least one more degree to go,” he said.