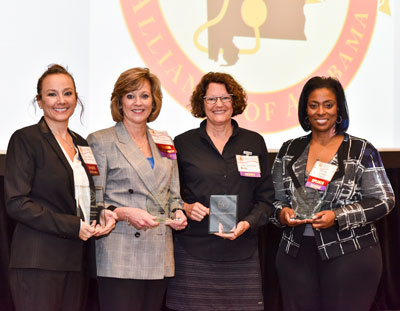 Eight members of the University of Alabama at Birmingham School of Nursing family have been recognized by the Nurse Practitioner Alliance of Alabama (NPAA) for their exceptional work and were recently honored at the 12th Annual NPAA Conference in Birmingham. Receiving awards were eight alumni, including two UAB School of Nursing faculty members and one Board of Visitors member.

Joy Deupree, PhD, MSN, RN, WHNP-BC, a two-time alumna, Assistant Professor and Director of Community Engagement for the UAB School of Nursing, received the Outstanding Senior Advisor for Policy Award in recognition of her excellent mentorship of NPAA officers and members who advocated for policy advancements this year. Deupree is a former president of the NPAA and serves as the organization’s Senior Advisor for Policy. She earned her Bachelor of Science in Nursing (BSN) and Master of Science in Nursing (MSN) from the UAB School of Nursing in 1994 and 1997, respectively.

Carla Turner, DNP, CRNP, ACNP-BC, also a two-time alumna, received the Outstanding Nurse Practitioner Educator Regional Award for Central Alabama in recognition of her contributions to advanced nursing education. She is an Assistant Professor at the UAB School of Nursing and coordinates the adult-gerontology acute care nurse practitioner specialty track. Turner earned her MSN and Doctor of Nursing Practice (DNP) from the School in 2008 and 2013, respectively.

Two-time alumna and Board of Visitors member Eileen Meyer, DNP, CRNP, received the NPAA Outstanding Advocate Award in recognition of her distinct and steadfast advocacy to the nursing profession in Alabama. Meyer is an acute care nurse practitioner and Assistant Director of Advanced Practice Providers at UAB Hospital and serves as Vice President of Policy for NPAA. She earned her MSN and DNP degrees from the School in 1997 and 2017, respectively. Her husband, Bruce Burns, MD, who is also a member of the Board of Visitors, endowed a scholarship in Meyer’s name in the UAB School of Nursing in 2014.