Thirty-nine years ago, Larry Hornsby and Carol Cochran met on campus at UAB. In 1982 they married as UAB School of Nursing graduates. 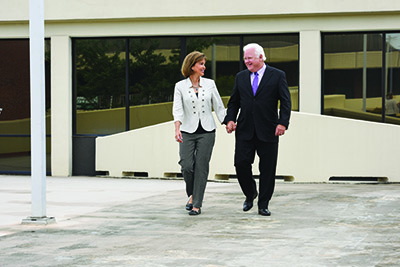 I give a tremendous amount of credit to the UAB School of Nursing— without my education, I would not have entered the greatest profession there ever was. But most importantly, I would not have met my beautiful wife,” Larry Hornsby (BSN 1981, BS 1985) said.

“Those times were hard. We know the struggles nurse anesthesia students go through, since they cannot work due to the rigors of the program,” Carol said. “We wanted to do something to help.”

“Being a Certified Registered Nurse Anesthetist (CRNA) has afforded me an incredible career and unbelievable opportunities. Now, I want to pay it forward by investing in the next generation of nurse anesthetists and giving back to the School that prepared me,” Larry said.

After founding the first CRNA-owned anesthesia management company in Alabama, Hornsby grew his business to eventually become one of the largest in the nation, and he is the only CRNA from Alabama to ever serve as president of the American Association of Nurse Anesthetists. In 2013, he received the organization’s highest honor, the Agatha Hodgins Award for Outstanding Accomplishment.

“My service to the nurse anesthesia profession has been one of the most rewarding experiences of my life—next to raising our children,” Larry Hornsby said. The couple’s son, Drew Hornsby, is now a CRNA and a UAB School of Nursing graduate. Their daughter, Laura Hornsby Lesley, is a UAB College of Arts & Sciences graduate who currently works for the UAB School of Nursing.

“Our family’s ties to the School are strong,” Carol said. “Establishing this scholarship made a lot of sense for us. We hope other UAB School of Nursing families like us will come forward to support the future of nursing, too.”

Carol serves on the board for the Nursing Chapter of the UAB National Alumni Society and Larry serves as an inaugural member of the School’s National Advisory Council. He was named as one of 60 Visionary Leaders of the School in 2010 and in 2016, he received the School’s Distinguished Alumni Award.