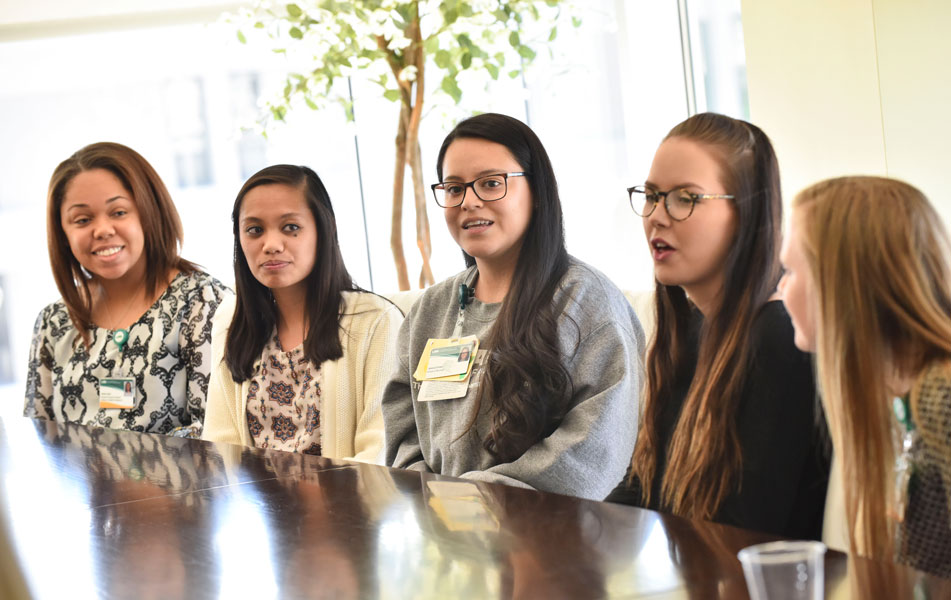 In life, Lettie Pate Whitehead Evans was a philanthropist and businesswoman who regularly supported education, arts and cultural institutions throughout the Southeast. Evans died in 1953, but her legacy of benevolence continues through the Lettie Pate Whitehead Foundation and its scholarship program.

The Foundation’s scholarship program awards annual education grants to universities throughout the Southeast, to support qualifying female students with financial need, and it has supported students at the University of Alabama at Birmingham since 1976. For the 2019-2020 School year, the Foundation pledged nearly $400,000 in scholarships, which is split equally between the UAB School of Nursing and UAB School of Health Professions.

A total of 45 Bachelor of Science in Nursing (BSN) students received Foundation scholarships for the 2018-2019 school year. For three of those recipients, who received funding for the Summer 2019 semester, the scholarship money means that school, rather than finances, can be a primary focus.

“Scholarships and grants are so important for our students at UAB School of Nursing,” said Dean and Fay B. Ireland Endowed Chair in Nursing Doreen Harper, PhD, RN, FAAN. “The support of the Lettie Pate Whitehead Foundation has allowed our students to keep their focus in the classroom, to gain experience and education, and to become the driving force of high-quality care in the future of nursing.”

Rachel Hammons was not sure about her career path in early high school. In August 2019, she graduated from the UAB School of Nursing with her Bachelor of Science in Nursing (BSN).

“My mom had a stroke when I was 14, and I was with her the whole time that she received treatment at UAB and Spain Rehabilitation Center,” Hammons said. “During that time, I talked with her nurses, and they told me everything that was great about their career, and of course, I was realistic and asked questions about the challenges. It helped me see nursing as a potential path.”

When her mom returned home and was recovering from her stroke and resulting aphasia, Hammons took care of her and her four siblings. People noticed her knack for caring for others, and while she thought about entering medical school or studying occupational therapy, those options were not “personal enough,” Hammons said.

Hammons’ mom is an opioid addict, and at an outside hospital, her stroke symptoms were ignored due to that medical history. At UAB, however, her care providers were not judgmental and instead worked to provide her the best care as she recovered from her stroke and addiction.

“The care was very patient-centered at UAB. Before my mom’s stroke, I thought all nurses and doctors were the same, but when you can see the difference in level of care and attention for a patient, it makes an impact,” Hammons said. “After getting experience at UAB, I would like to potentially practice in a rural setting and offer these new methods of care and high-quality care to rural communities.”

Hammons has continued to work throughout nursing school, but scholarships such as the Lettie Pate Whitehead Foundation scholarship allow her to put classes and studying first.

“The scholarships I have received during my time at UAB SON have allowed me to take out fewer loans and cut back on my non-nursing jobs,” Hammons said. “I still work two to three days a week, but work doesn’t have to be my priority. This scholarship, especially, is helpful because it is tricky to get federal aid to cover a summer semester of classes.”

After graduation, Hammons hopes to practice in UAB’s cardio pulmonary critical care unit, where she has her summer preceptorship. She also wants to bring the same patient-centered, supportive attitude she saw from her mom’s nurses into her own method of care.

“Her nurses not only wanted to help my mom heal from her stroke, but they removed any feelings of self-pity and encouraged her,” Hammons said. “They turned her aphasia into a solvable problem. In the past, some people told me to be a doctor, to go to medical school, but I want to be on the front lines as a nurse. I want to be there all the time and have that same impact on my patients.”

Summer 2019 Bachelor of Science in Nursing (BSN) graduate Jessica Cortez was first interested in becoming a nurse due to her grandmother’s chronic obstructive pulmonary disease (COPD). She was in and out of the hospital with this lung disease, and Cortez would go with her on hospital visits.

Then, as she completed her nursing school application, her father had a stroke.

“His experience reinforced my decision to apply to nursing school because it showed me that a lot of people are not educated on the basics of health care and symptoms,” Cortez said. “In the English-speaking community, there are a lot of acronyms for things like heart attack and stroke symptoms, but in the Spanish-speaking population, we don’t have a lot of those resources.”

Cortez grew up in Albertville, Alabama, a rural community with a large Spanish-speaking population. In their community, the emergency room was a first stop for medical care, and there wasn’t a lot of information about preventative care or primary health.

“There are not a lot of Spanish speaking nurse practitioners, especially in rural areas. When there’s a language barrier, it can be hard for providers to communicate with patients and vice versa,” Cortez said. “This leads to a lack of understanding about medical regimens, needs and other things. After I graduate and get some work experience at UAB, I hope to go back to school, become a primary care nurse practitioner and then return home to practice.”

Scholarships were a vital part of Cortez’s nursing school experience by allowing her to focus on school and participate in activities outside of school.

“In our culture, everyone is very tight knit. Coming to college was challenging because I had to leave my community and was on my own in a lot of ways, but scholarships allowed me to support myself through my education,” Cortez said. “They also allowed me to focus on course content and do things outside of school, such as my church choir, to relieve the pressure of classwork.”

Cortez also tutors other students in the School of Nursing and works with students from Albertville on college and scholarship applications.

“The advice I give a lot of high schoolers back home is to ask for help, ask questions always, get a really good mentor and apply for all of the scholarships you can,” she said. “My career goals are not only about going back to help my community through medical care, but also to be a role model for young kids and show them what they can accomplish.”

UAB School of Nursing BSN student Abigail Hayes decided to pursue a career as a nurse when she was in high school.

“Nursing became my career of choice because I fell in love with the role that nurses play as patient advocates,” Hayes said. “Seeing nurses care for their patients through compassion and patience, while also getting to grow in skills and knowledge about science in medicine, is intriguing to me.”

The Lettie Pate Whitehead Scholarship enabled Hayes to focus on school and not have work and finances as her primary focus, thereby benefitting her education.

“I am so thankful for the generosity of this Foundation, as it has allowed me to spend less time working and more time studying and preparing for my future as a nurse,” she said.

Hayes will graduate from UAB School of Nursing in 2020, and she plans to work in the emergency room or psychiatric unit at a hospital for a few years. She will also continue her education by returning to school for her Master’s of Science in Nursing and receiving her Nurse Practitioner degree. She also hopes to pursue opportunities overseas and assisting underserved populations.

“I've always had a dream to travel and learn from different cultures. Although I'm not certain of what type of nursing I'm called to, I know I want to spend a part of my career as a nurse serving overseas,” Hayes said. “Specifically, my goal is to contribute, as a nurse, to the medical efforts that are focused on the people living in refugee camps. I've heard of the need for medical relief within the refugee population, and I would be thrilled to be a part of a team that serves them.”
Read 1735 times Last modified on September 18, 2019
Tweet
Tagged under