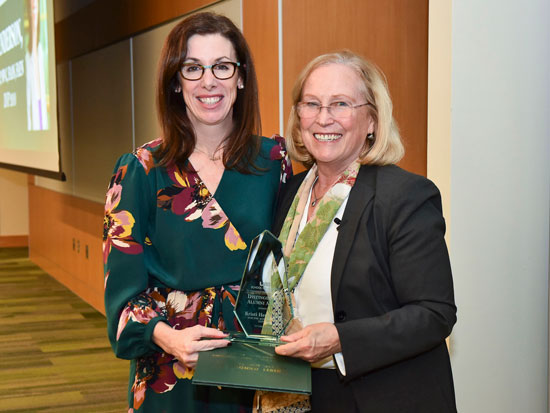 The University of Alabama at Birmingham School of Nursing, together with the Nursing and Nurse Anesthesia Chapters of the UAB National Alumni Society, hosted its annual “Alumni Night” celebration on October 17, 2019. The event was held in the School’s state-of-the-art Leadership Institute, part of its recent building expansion.

The celebratory events began with the Distinguished Alumni Presentation from Kristi Henderson, DNP, FNP, ACNP, FAAN, FAEN, recipient of the School’s prestigious 2019 Distinguished Alumni Award. Then, guest enjoyed a reception and guided tours of the School’s new building expansion, followed by a seated dinner with annual alumni awards presentations and installation of the Nursing Alumni Chapter Board.

Doreen C. Harper, PhD, RN, FAAN, Dean and Fay B. Ireland Endowed Chair in Nursing, presented the 2019 Distinguished Alumni Award to Henderson. Established in 1989, this award is the highest honor bestowed by the School, recognizing an outstanding graduate who has demonstrated leadership, innovation and entrepreneurship to significantly enhance nursing on state and national levels through clinical or administrative practice.

Henderson, leader of clinical operations for Amazon Care and Clinical Professor of Population Health at the Dell Medical School at the University of Texas-Austin, earned her Doctor of Nursing Practice (DNP) from the UAB School of Nursing in 2010. She has more than 25 years of experience as a digital health leader, innovator, health advocate, educator, researcher and clinician. Henderson is known for her important work in developing a statewide Telehealth model in Mississippi and for her keen ability to execute and sustain these models in advance of them becoming an industry standard. She has testified before multiple U.S. Senate committees to advance telehealth policy and share innovative new models of care. 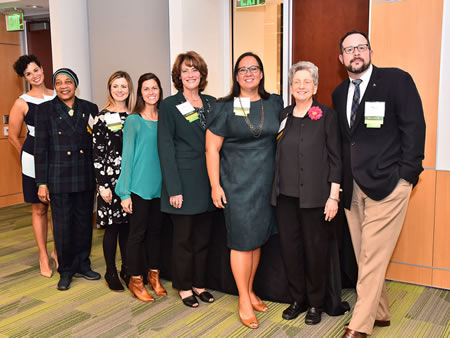 The Nursing Chapter of the UAB National Alumni Society installed its new officers and board members at the 2019 Alumni NightAs a token of appreciation, Harper presented Henderson with a bound copy of her nomination letters.

Additionally, several other alumni were honored for their service and dedication to nursing and the School.

The Marie L. O’Koren Alumni Award for Innovation was presented to Cristina C. Hendrix (MSN 1996), DNS, GNP-BC, FNP, FAAN. Hendrix is an associate professor and Division Chair of Clinical Health Systems and Analytics at Duke University School of Nursing. She is also a core team member of the Geriatric Research, Education, and Clinical Center at the Durham Veterans Affairs Health Sciences Center.

The Jo Ann Barnett Award for Compassionate Care was awarded to five deserving alumni this year. The award memorializes Barnett, a UAB School of Nursing graduate and neonatal nurse practitioner who was a champion for the highest quality of compassionate care for her patients and their families. Barnett passed away in 2002 and that year, the Nursing Chapter of the UAB National Alumni Society established the award to honor her service to her patients, community and alma mater. This year’s five recipients are:

The Career Achievement in Nurse Anesthesia Award was presented to Ray Dunn (MNA 2008), MNA, CRNA, Corporate Director of Anesthesia for DCH Health System. A retired Naval Officer with more than 25 years of service to our country, Dunn is the immediate past president of the Alabama Association of Nurse Anesthetists and is a two-time recipient of the Alabama Hospital Association Regional Healthcare Award and the organization’s State of Alabama Healthcare Hero Award.

The Rising Star in Nurse Anesthesia Award was presented to Brittany Jones (MSN 2015), MSN, CRNA, a staff CRNA at Baptist East Hospital in Montgomery, Alabama. She is a DNP candidate at the University of Alabama, anticipating her degree completion in May 2021.