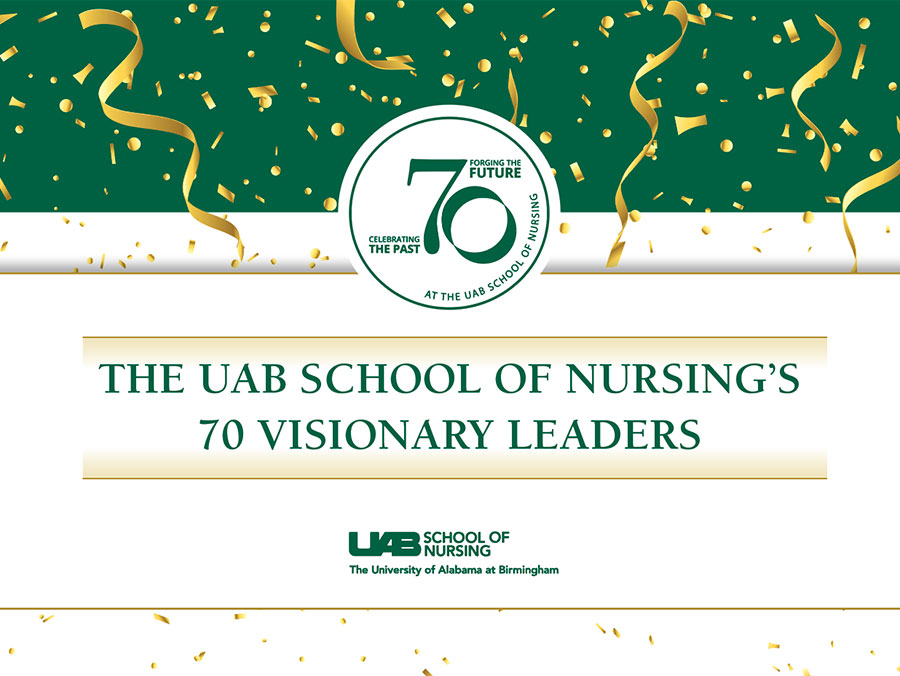 In celebration of its 70th anniversary, the University of Alabama at Birmingham School of Nursing is honoring 70 alumni who are leaders in the field of nursing, nurse anesthesia and health care with the Visionary Leader distinction. They join the first 60 Visionary Leaders named in 2010 for the School’s 60th Anniversary.

The Visionary Leader distinction recognizes outstanding UAB School of Nursing graduates for exemplary service in education and research, exemplary leadership, innovation, and far-reaching impact on nursing and health care on state, national, and international levels. Recipients were nominated by fellow graduates, colleagues and peers in their respective fields for their outstanding achievements and leadership.

“As we mark the 70th anniversary of the UAB School of Nursing, we honor and celebrate our alumni who have been integral in distinguishing the School in state, national and international circles and in shaping the field of nursing and health care," said Dean and Fay B. Ireland Endowed Chair in Nursing Doreen C. Harper, PhD, RN, FAAN. “There are so many well established and accomplished alumni from the School of Nursing that narrowing down to just 70 visionary leaders was an extremely difficult task for our peer evaluation selection committee.”

Well over 100 nominations were submitted by colleagues, mentors, mentees and fellow graduates. The nominations were reviewed in a highly selective peer-reviewed process. The selection committee, comprised of a diverse and well-recognized group of nursing and health care leaders, carefully scored each nomination packet based on achievements, service, leadership and impact on health care. Scored nomination packets were then ranked and recipients were determined from the rankings.

In addition to the 70 Visionary Leaders, a posthumous award will recognize Patricia Goode Culpepper, MD, MSN, who passed away in November 2020. Culpepper, who earned her MSN in 1977, worked as a nurse before going on to earn her Doctor of Medicine degree from the UAB School of Medicine. She was a well-known clinician, educator and researcher in geriatric medicine.

Visionary Leader award recipients will be honored during a series of virtual events held in April 2021, where the School will celebrate their success and accomplishments. Recipients will also have their names and bios added to the Visionary Leaders digital display in the School building. The School began its 70th anniversary celebration in 2020, but in-person events to mark the occasion were postponed due to COVID-19.

The Visionary Leader award recipients are: