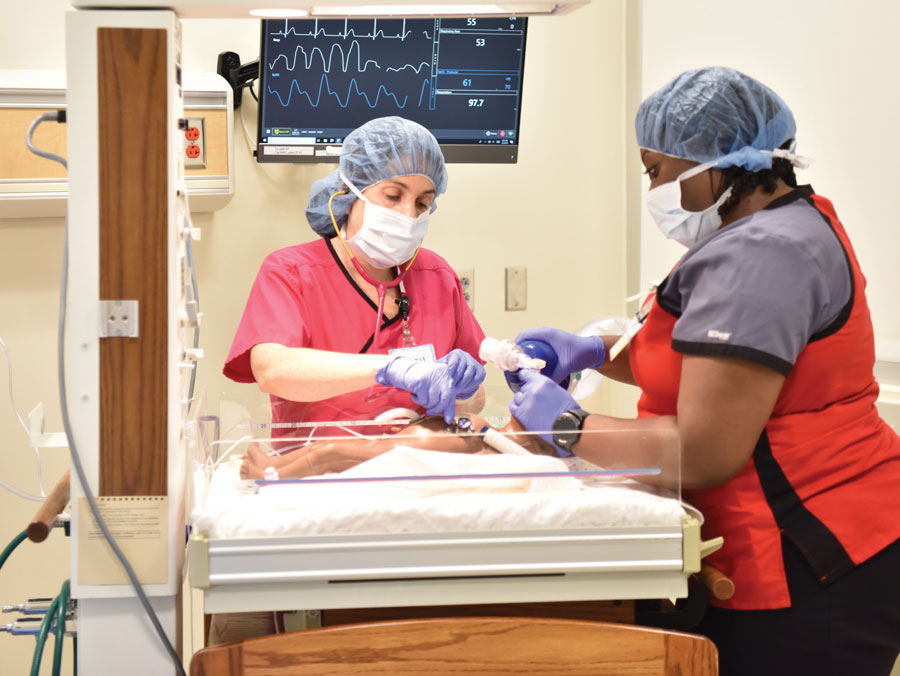 Collaboration is a key to advancing education, service and research. In late 2019, faculty at the University of Alabama at Birmingham (UAB) School of Nursing created a collective geared creating new knowledge, and to make a difference in the lives of some of the world’s tiniest patients.

The Neonatal Scholars Interest Group (NSIG) is a collaboration of neonatal nurses, nurse practitioners and nurse scientists from a variety of backgrounds. It started as an idea from Assistant Professor Katherine Dudding, PhD, RN, RNC-NIC, who joined UAB in July 2019. Her goal was to create a space for collaboration, education and research centered on neonatal care.

“The group’s mission statement is to be ‘a group of UAB School of Nursing neonatal scholars making a difference and outcomes in the lives of neonates through research, teaching and service,” Dudding said. “I’ve had this idea for a while, but I knew I had to wait until I was settled at UAB to begin networking with other neonatal scholars.”

Dudding reached out to Professor and Chair of the Department of Acute, Chronic & Continuing Care, and Director of the Office of Interprofessional Curriculum, Allison Shorten, PhD, RN, FACM, FAAN, who got the ball rolling with an email.

“As soon as Kathy started talking about her idea, I thought, ‘Yes, we can do that.’ This group represents what attracted me to UAB,” Shorten said. “There’s a beautiful mix of skills, personalities and interests that gel really nicely, and it’s in everyone’s interests for everyone to be successful. We know that my success, other’s success — it is all our group’s success.”

The NSIG held its first meeting in late 2019, and regular meetings have continued throughout UAB’s remote working model during the COVID-19 pandemic. Moving to a virtual setting has not slowed down the group at all, Shorten said, and they continue to collaborate on manuscripts, classroom innovations and more.

“This all started as an email, but immediately it was something we were all enthusiastic about,” said Assistant Professor Curry Bordelon, DNP, MBA, CRNP, CNE, NNP-BC, CPNP-AC (DNP 2016). “As faculty, it’s a way to build scholarship, and it is a group where we can see the energy from each other. The enthusiasm really drives home the importance of what we’re doing and the need for what we’re doing.”

One of the first projects for NSIG is contributing to a series for Neonatal Network, a bimonthly peer-reviewed journal centered on neonatal nursing. The series centers on using simulation in a neonatal environment and provides opportunities for all NSIG faculty to collaborate on at least one manuscript.

By creating a network of neonatal scholars within the School of Nursing, Dudding said NSIG also opens doors to new opportunities. When a chance to collaborate on a book or another publication arises, for example, they can reach out within the NSIG network.

“If we can promote any one of our colleagues, we’re going to do it,” Dudding said. “This not only helps us professionally, but also helps the School by highlighting our expertise and scholarship.”

“At the end of the day, we want to improve practice,” Shorten added. “It’s about building connections in our scholarship, and the outcomes in practice are something we’ll build to in the future.”

The group started off with a strong foundation, including a mission statement and standard acknowledgement that credits the Neonatal Scholars Interest Group whenever the group is published. That, along with organizational planning and support from School of Nursing leadership, has enabled NSIG to develop plans for manuscripts over the next several years.

Moving forward, NSIG is an opportunity to emphasize UAB and the School of Nursing’s strengths in neonatal scholarship, Shorten said, which can attract new students, faculty and funding opportunities.

“NSIG is an opportunity to mentor each other within the group and to involve students through mentorship and education,” she said. “Growing our neonatal nurse practitioner program, applying for grants and gaining additional funding requires you to establish a reputation for research and scholarship, and that’s what we’re working to do. We want people to ask, ‘Where do you want to be for neonatal education?’ and they say, ‘UAB.’”