Got cabin fever? Check out 12 larger-than-life murals around town

Need a change of scenery? Birmingham artists have you covered — the murals they’ve painted all over town provide plenty of colors, patterns, structures and figures to inspect, both in-person or online.

Whether they’re on UAB’s campus, along downtown’s historic Morris Avenue or in the bustling northeast Birmingham neighborhood of Avondale, these 12 murals are the perfect colorful distraction.

Painted by artist Marcus Fetch, “Angels Wings” is painted on the north exterior wall of the building next to Avondale eatery Melt. It features a large set of wings with which adults can pose and a smaller set to the left for children or someone seated.
ANDREA MABRY / University Relations

“It’s Awesome to Have You in Avondale”

Emblazoned with the words “With every fall comes spring,” this mural on the southern exterior wall of Good People Brewing Co. downtown was created by artists Marcus Fetch and Sean Gilder through RedPath Creative in support of the Hope for Autumn Foundation, which raises awareness and money for families battling childhood cancer and for cancer research.
ANDREA MABRY / University Relations

This colorful mural is 500 feet long and was painted by dozens of volunteers near the railroad tracks off Morris Avenue between 20th and 22nd streets north.
ANDREA MABRY / University Relations

Located on the eastern side of a condominium building on downtown’s Morris Avenue, this mural of a tall robot with a monkey friend was painted by Birmingham artist John Lytle Wilson.
ANDREA MABRY / University Relations

The green and gold flora-inspired mural, commissioned by UAB for its 50th anniversary in 2019 and designed and created by students, is painted inside the pedestrian bridge over University Boulevard at 13th Street South.
LEXI COON / University Relations

“What You Do Matters”

Painted on the eastern exterior wall of University Place Apartments on 18th Street South on the edge of UAB’s campus, this mural was created by Paul Cordes Wilm and depicts the Rotary Trail sign, the downtown Birmingham skyline and Vulcan.
ANDREA MABRY / University Relations

Use this specialized Google Map, created by the UAB Reporter, to find murals closest to you or to plot the path of your next outdoor walk. 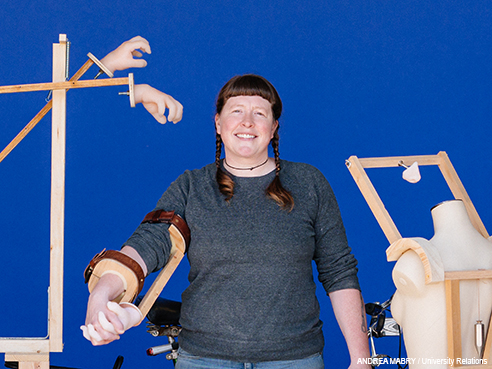 Assistant Professor Stacey Holloway combined silicone molds of her own body with doorstops, rubber bands, an old record player and more to create prosthetic devices that mimic physical connections in these days of social distancing. 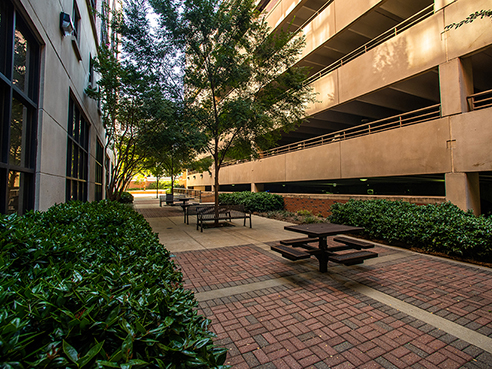 It’s easy to think the only jungle around campus is the concrete kind. But you can find a little-known green space closest to where you work, live and play using this Google Map we created just for you. 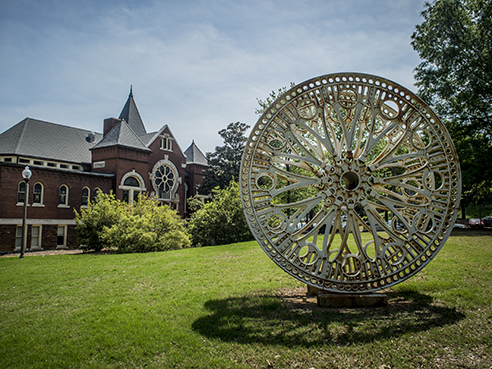 UAB’s campus is home to more than 35 statues or sculptures, and each trail takes about 30 minutes or fewer to walk. Explore each on a custom Google Map.