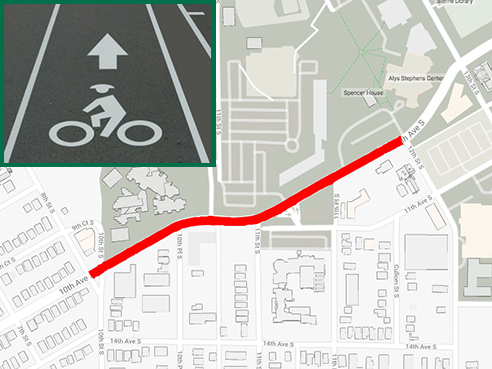 New bike lanes occupy the former right lanes of 10th Avenue South, transitioning it from a four- to two-lane road. At each intersection and various driveways, bike lanes will be painted green and feature symbols painted in white to alert drivers to the presence of cyclists.

“Driving in a bicycle-only lane can endanger both the drivers themselves and the cyclists,” Boyd said. “To alert drivers to the potential presence of cyclists, we’re using UAB-green paint and bright white symbols to further delineate the bike lanes. This will also inform cyclists of the appropriate area within which to bike.”

Cycling can be an easier and more sustainable way to travel across UAB’s urban, 100-square-block campus; cyclists at UAB can follow these four simple steps to stay mindful of ensuring their own safety on the road. Additionally, hundreds of bike racks are available on campus, and in this past year, the updated bicycle and other wheeled mobility devices policy began allowing indoor bicycle parking in non-patient care buildings.

Student cyclists also can voluntarily register their bike with UAB Transportation and receive a free helmet and U-lock, and those who log their trips to campus with CommuteSmart can get paid for commuting sustainably.