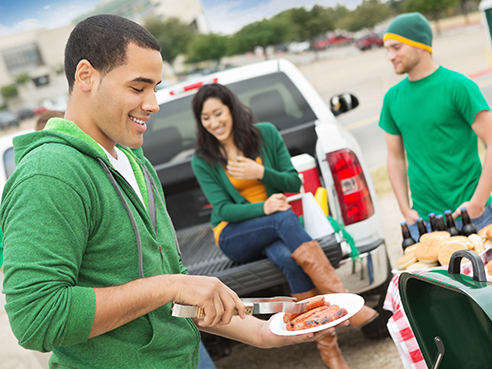 Tailgating is one of the best parts of football season — but nothing quashes Blazer spirit quite like food poisoning. Understanding different types of bacteria, ways they’re transmitted and plans to keep your food safe is key to enjoying your tailgate and keeping guests healthy, says Rachael Lee, M.D., assistant professor in the Division of Infectious Diseases.

The top five causes of foodborne illness include norovirus, salmonella, Clostridium perfringens, Campylobacter and Staphylococcus aureaus. Other pathogens such as clostridium botulinum, listeria and pathogenic E. coli cause fewer illnesses — but when they do, they can lead to hospitalization, Lee says.

Salmonella, shigella, campylobacter and pathogenic E. coli, which invade intestinal cells and can cause watery or bloody diarrhea, can come from fecal contamination of food, including raw meat, contaminated produce and other contaminated water and food. In other cases, food can become contaminated by toxins from bacteria such as Staphylococcus and Clostridium, and when ingested, these toxins can cause abrupt nausea and vomiting with quick recovery, Lee says — usually within one day.

Listeria is bacteria most commonly found in soil. It is carried in the intestinal tract of 5%-10% of humans who are asymptomatic.

To lower your chances of food poisoning, follow these steps.

1. Wash your hands and food preparation items while cooking.

Poultry is a good example of meat that is contaminated when raw, Lee says. Sometimes, even if it’s cooked thoroughly, people still get sick from eating it. This is because of cross-contamination.

“Did you properly wash the knife you used to cut into the raw turkey?” Lee asked. “If not, and you used it to cut the cooked turkey, the bacteria from the contaminated knife gets transferred to the cooked meet.”

3. Invest in a food thermometer…

Don’t be fooled by the way meat and poultry look on the outside — they often brown faster than they cook on the inside, the FFSA warns. The only way to be sure food has reached a safe minimum internal temperature, which both prevents the growth of harmful bacteria and guards against overcooking, is to use a food thermometer. View the FFSA’s minimum cooking temperature chart online. 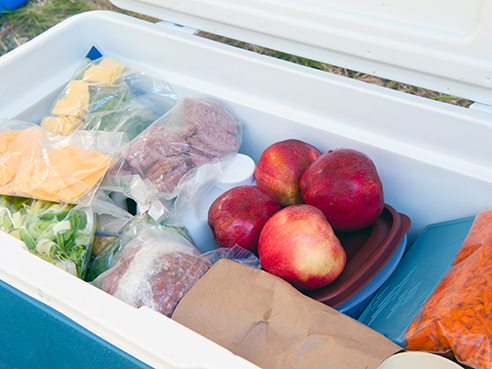 4. … and plenty of coolers, ice and frozen gel packs.

The FFSA recommends cold perishable food items such as raw hamburger patties, sausages and chicken should be kept in an insulated cooler packed with several inches of ice, frozen gel packs or ice containers. Pre-cooked perishable food items such as lunch meat, cooked meat, chicken and pasta and potato salads should be kept refrigerated, too. Keep a thermometer in the cooler to ensure the temperature stays below 40 degrees.

Watch out for noncooked tailgate foods like mayonnaise and dessert icing, Lee says: Because they aren’t cooked, it can be hard to eradicate bacteria such as staphylococcus if the items have already been contaminated. Even fruits and vegetables can contain pathogen bacteria; Salmonella and pathogen E. coli have been known to contaminate lettuce. The warmer the temperature, the more ideal it is for the bacteria to grow, so it’s often best to keep everything chilled.

“Staph infections themselves don’t make us sick, but they produce toxins that do,” Lee said. “Be wary of popular tailgate foods like coleslaw and potato salad.”

If you bring hot take-out food to a tailgate, be sure to eat it within two hours of purchase, the FFSA recommends. That timeframe shortens to one hour if the outdoor temperature is 90 degrees or more. Any perishable food that isn’t eaten within that period should be thrown away to prevent sickness from bacterial growth.

Chilis, soups, stews and hot dips should be kept in an insulated container; if you can’t keep hot food warm during the drive to the tailgate, chill it before packing it in a cooler and reheat it on location to 165 degrees.

Starch-based food such as pasta and potatoes can generate B. cereus, a spore-forming organism that creates an infectious toxin, after it sits and cools down. As the food cools to below 122 degrees, the spores germinate and start producing toxin, causing symptoms when ingested.

The issue isn’t leaving food out too long, Lee says — if foods are kept at safe temperatures and weren’t previously contaminated, they are safe to eat. The bigger questions are whether the food was contaminated before or during cooking and whether they have been kept at an appropriate temperature.

“The best weapon against getting sick from eating at a tailgate is doing due diligence,” Lee said. “If you’re doing the cooking, make sure your hands, cookware and utensils are clean and free from contamination. If you’re eating pre-prepared food, make sure it’s been kept at the right temperature.”

6. Keep an eye on your loved ones.

Most at risk are senior adults, babies and those who are immunosuppressed. Senior adults and babies are at a higher risk of dehydration, which can be harmful.

“Babies and senior adults who need assistance with daily living may not always know when they are thirsty and can’t necessarily tell their caretaker,” Lee said. “They can’t always voice their symptoms, so it is important to make sure they stay hydrated.”

People with diabetes, cancer, lupus, rheumatoid arthritis, Crohn’s disease and other immunologic diseases are at risk of serious complications when it comes to food-borne illness. The bacteria could get into their bloodstream or settle in their bones, affecting their diseases further.

A particular strain of E. coli (O157:H7) and shigella can cause a rare complication called hemolytic uremic syndrome, which is when clots form in the very small vessels, blocking circulation to kidneys and brain and causing kidney failure and/or confusion. Lee recommends seeing your primary provider immediately if you experience bloody diarrhea or if you develop unexplained bruises or unusual bleeding or have decreased urination.

And if you do get sick, remember to hydrate.

If you get sick from contaminated food, you might experience nausea, vomiting, watery or bloody diarrhea, and maybe fever. The good news is, Lee says, your illness will only last a day or so if you stay hydrated.

“For the most part, the toxins will work themselves out within 24 hours,” Lee said. “You will just be sick and uncomfortable, but there are not any serious dangers unless someone has a compromised immune system.”

Depending on the pathogen, food-borne illnesses are self-limiting, and one will recover within 24 to 72 hours. Once the body has dispensed the bacteria or toxin, the body will recover.

If you experience symptoms for more than three days, become dehydrated, dizzy, pass out or have a fever for more than 24 hours, you should see a physician.

“Hydration is more important than food, and the key to recovering from a food-borne illness,” Lee said. 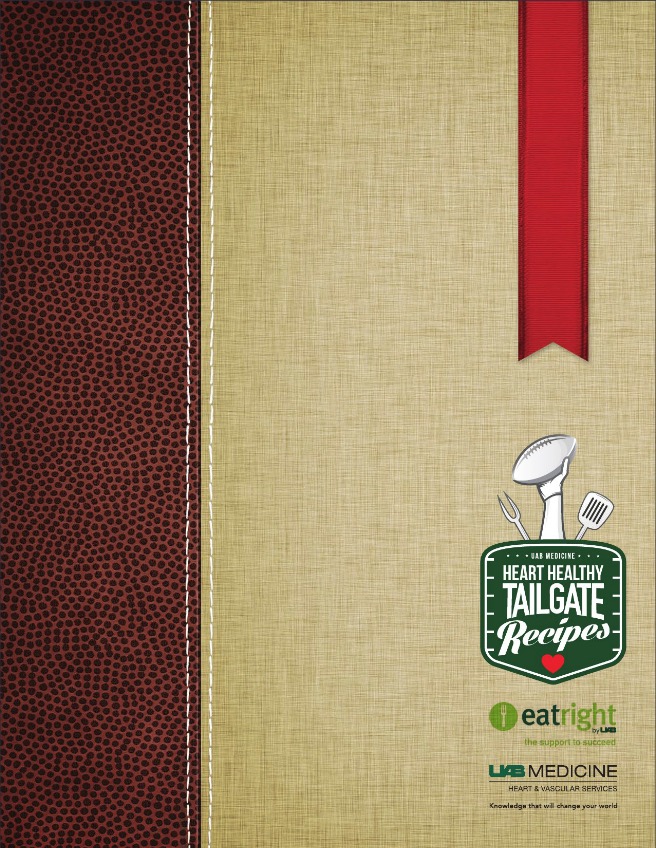 Healthy eating and tailgating during football season don't seem like they go hand-in-hand, but the UAB Medicine Heart Healthy Tailgate Recipe book has great-tasting recipes that are sure to be a hit at your next tailgate.
Published in Campus Safety