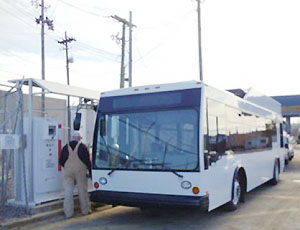 After years of research and development, UAB unveiled a zero-emissions, hydrogen-fuel-cell bus at Birmingham’s downtown intermodal site April 16. The bus joins the Birmingham-Jefferson County Transit Authority MAX fleet and will operate on its downtown routes.

Combining hydrogen from storage tanks and oxygen from the air, a fuel cell produces electricity that powers all onboard systems, producing only a trickle of water vented at the rear of the bus. Onboard fuel tanks can store enough hydrogen for the bus to operate a full eight-hour shift without refueling.

The bus will operate on MAX routes for 18 months to test the performance and reliability of the fuel-cell system under a variety of operating conditions. The results of this demonstration will be used to guide designs and deployments of future fuel-cell bus fleets and ultimately automobile applications.

"Hydrogen fuel cells are being explored to power vehicles of the future," said Fouad H. Fouad, Ph.D., principal investigator and chair of the UAB Department of Civil, Construction and Environmental Engineering. "They produce no harmful emissions and offer significant improvements in range compared to battery-powered vehicles."

The Federal Transit Administration, through a $2 million grant, provided initial funding for the bus to the UAB Department of Civil, Construction and Environmental Engineering.