Lower level Bartow seats: out with the old, in with the new

Seats in Bartow Arena have been cracked, split, twisted and broken numerous times since 1988. Piling up home victories — more than 200 apiece for men’s and women’s basketball and 160 for volleyball — has given UAB fans and students reason to jump up and down and in some cases, take a step up in the seats and yell. 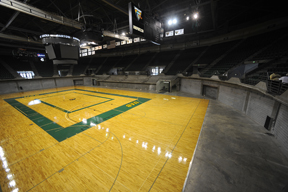 “The students, sometimes they don’t just stand on the seats, they jump on them,” says Stephen Mitchell, former men’s basketball player and director of the arena. “It makes for a great crowd, but it’s not good for your seats.”

Now, after 23 years of loving abuse from the green and gold faithful, the lower-level seats in Bartow Arena have been ripped out, recycled and are in the process of being replaced. The new, state-of-the-art, semi-automatic seats are expected to be installed and ready when the Blazers volleyball team opens its 2011 home schedule Sept. 23 against Marshall.

“It was just time,” Mitchell says of replacing the seats. “The seats take a beating during the course of a basketball season, and they don’t make that particular chair anymore. Obtaining parts for them was impossible; the parts are obsolete. It got to the point where we didn’t have a choice.”

“I was very concerned about how they would look five years from now if you’re spilling mustard and ketchup all over them,” Mitchell says. “But we picked something that could be easily wiped down and cleaned. They’re pretty durable.”

The other significant upgrade is the ability to electronically protract and retract the seats. The previous seats had to be moved manually, which meant Mitchell had to schedule a team of people to complete the task — a chore that could take up to two hours.

“We had to use a lot of manpower before,” Mitchell says. “We will be able to press a button and move them in and out now. That process should take only 20 to 30 minutes. That’s a big upgrade.”

There are no current plans to replace the upper deck seating. Those seats, Mitchell says, haven’t taken quite the same abuse as the lower-level seats.

“People don’t stand and jump on the upper level seats,” Mitchell says. “Downstairs with the students is a different story. I guess if their tactics cause our opponents to miss some crucial free throws down the stretch it was well worth it.”

The new seats are the third significant upgrade to Bartow in as many years. UAB partnered with ISP Sports to acquire a new state-of-the-art, LED-technology scoreboard in 2009. This past year, 60-inch televisions were mounted over each concession stand so patrons could keep up with the action on the floor when making a trip for food and drinks. Team photos also were added to the concourse entryways.

Other changes are taking place behind the scenes. The arena’s original chiller is in the process of being replaced. And Mitchell is working towards at least some of the concession stands to accept ATM and credit cards beginning this fall.

Add those projects to the ongoing Steam System Distribution Project — which is affecting the concourse outside of Bartow next to Campbell Hall — and it has been a busy, constructive summer (pun intended).