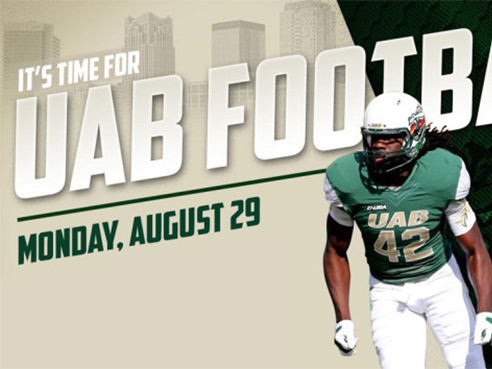 UAB Football will make its 2016 debut Aug. 29, when the Blazers host a Green and Gold Game at BBVA Compass Field. UAB will play a full game of four 15-minute quarters.

"Our football team is going through preseason camp with this game as the main focus," UAB Football Head Coach Bill Clark said. "We want to put on a good show for our fans, so we are going to prepare like every other team in the country would for their season opener."

Pregame activities start at 5 p.m. on the West Campus Athletics Fields with the Blazer Fan Fest complete that will include inflatables, games, meet-and-greets with student-athletes and performances by the UAB Marching Blazers band and spirit squads.

Gates to BBVA Compass Field open at 6 p.m. with the game set for a 7 p.m. kickoff. Admission for the game is $5 for adults and $3 for fans ages 18 and younger; UAB students with a valid Blazer ID are admitted free. Tickets can be purchased 9 a.m.-5 p.m. in advance from the UAB Athletics Ticket Office in Bartow Arena or at the gate on game day.

This all follows a 9 a.m. groundbreaking ceremony for the new UAB Football Operations Center and Legacy Pavilion, which will house office space, meeting and film rooms, training facilities, locker rooms, weight room and practice fields, at the site of the existing facility on University Boulevard and 11th Street.

"This is a monumental day for UAB," Director of Athletics Mark Ingram said. "Having a new football training facility will enhance the entire look and feel of campus and is a great representation of the support the entire Birmingham community has shown for the Blazers."

"The Football Operations Center and Legacy Pavilion mean so much to this program and puts us on a level playing field with other programs," Clark said. "We couldn't have done this without the tremendous support of so many donors and the community at large who rallied around the vision of building a championship caliber football program at UAB."

"Birmingham is on the move and strong athletics programs will enhance the pride and visibility to UAB and Birmingham's vibrant growth," Smith said. "This new facility is a key component to help in that process."