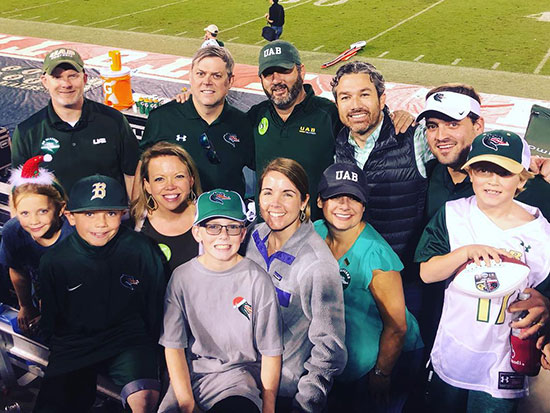 Kristin Johnson Chapleau (front row, third from left at the Boca Raton Bowl in 2019) is a program manager in the School of Health Professions and a proud alumna who was in the stands as a UAB student for the Blazers's legendary upset of LSU in 2000. "Season tickets to football and basketball were the first big purchase my husband and I made once we were married," she said.When the Blazers run out on the field for the first time at Protective Stadium to launch a new era for UAB Football, there is nowhere else pediatric ER doc Annalise Sorrentino, M.D., would rather be. When UAB Athletics opened their site and phone lines for season ticket sales, Sorrentino was first in line. You could say she’s the team’s No. 1 fan — and if you don’t, she will.

“I went to the Texas A&M game a few years back and was so proud of how they played on a huge, impressive stage,” said Sorrentino, a professor in the Department of Pediatrics. But her favorite part of UAB games is at home, “singing the fight song and cheering the team as they come out of the tunnel,” she said.

The 45,000-seat Protective Stadium has a host of exciting features, including one of the largest scoreboards in the country and a location in the heart of the Uptown entertainment district. When it hosts its first UAB home game Oct. 2 against Liberty University, Sorrentino is most excited about “seeing all those seats filled.” She encourages all UAB employees to be there to celebrate a new era. “These are our kids and they are amazing. We should be there to give them the support they deserve — and it’s so much gameday fun right in our own backyard.”

Sorrentino is one of many longtime Blazers fans who are thrilled to carry on UAB Football traditions from Legion Field and start new ones at Protective Stadium. Growing up in Birmingham, Bernard Mays Jr., controller and assistant vice president for Financial Affairs, would come to UAB games with his father. In 2018, he became a season ticket holder for the first time. The opening game against Savannah State, “was the first game where me, my dad and my daughter all attended together,” Mays said. “It was a decisive victory and we hung out with Blaze for a few minutes. Cool stuff in the Mays household.” Now that his son is older, “I plan to have the entire family on board” for the 2021 season, Mays said. “It is all about the energy in the stadium. Our fans ride hard for the team, and you can feel the passion.”


Mays said he is excited about “experiencing all the amenities and modern comforts of the stadium, and I look forward to the home game traditions that will be built here.” He encourages his fellow employees to not miss out on the unique opportunity to take part in this new beginning for UAB Football. “It is a great atmosphere, it’s exciting and it’s good to support our student-athletes and our city,” Mays said. 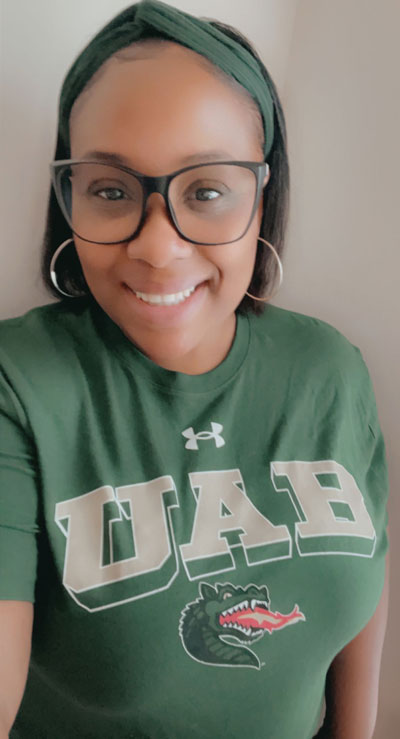 Chandra Johnston, an employment specialist with UAB Hospital, bought her first season tickets this year to enjoy family time at the new Protective Stadium. "I have a son who is a senior in high school, and I felt it would be a way to have some fun together," she said.

Kristin Johnston Chapleau, program manager for Biomedical Sciences at the School of Health Professions, has been a season ticket holder since 2007. “Season tickets to football and basketball were the first big purchase my husband and I made once we were married,” she said. Chapleau has too many precious UAB Football memories to choose just one. She was in Baton Rouge as a UAB student in 2000 when the Blazers upset LSU in Death Valley. “Watching Tim Alexander take steps on the field after The Return and celebrating with our two oldest children, friends from college, faculty, staff, students and the Blazers on the field at the Cheribundi Boca Raton Bowl” are other favorite moments, she said. “My daughter Maggie’s birthday is Dec. 21, and for the last few years Santa has surprised her with a trip to a UAB bowl game as an early birthday present,” Chapleau said. “We are all praying Santa and Coach Clark keep the birthday bowl surprises coming.”

What is it about UAB games that Chapleau finds so addictive? “The ‘UAB Family’ feeling,” she said. “Every time I attend a game, I come home feeling a part of something greater than myself. Whether it is the student-athletes and band members who thank you for attending or high-five my kids, or the colleagues and friends I run into and chat with before and after the game, I’ve never left a game feeling lonely. And given the team’s incredible home winning streak, I haven’t left sad in a long time.”

Chapleau is most excited about “seeing the players and coaches run on the field for the first time” at Protective Stadium, she said. “They have worked so incredibly hard over the last few years. Watching that moment with my children will surely be a memory I cherish for many years.”

Wendy Scripps, program manager for Student Recruitment in the School of Health Professions, has been a season ticket holder since 2017. (That season also provided her favorite Blazer memory so far: “When UAB blocked the field goal against Louisiana Tech to win,” she said.) Her favorite part of each game “is the very beginning when the team comes out of the tunnel before kickoff,” she said. And she can’t wait to experience that moment for the first time at Protective Stadium. “I am most excited to see how the new stadium brings UAB and the community together,” Scripps said. 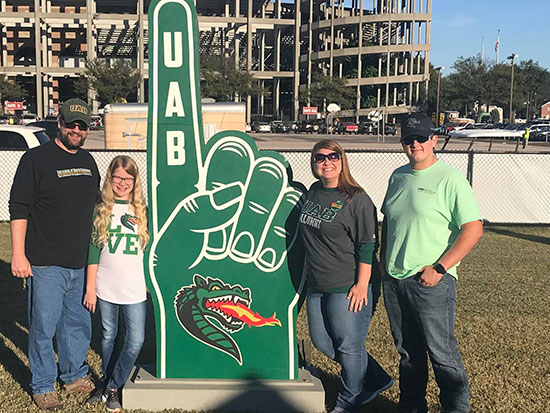 Wendy Scripps and her family have been season ticket holders since 2017. “I am most excited to see how the new stadium brings UAB and the community together,” Scripps said.The chance to say “I was there” for the launch of a new Blazer home has convinced many employees to buy season tickets for the first time in 2021. Chandra Johnson, an employment specialist for UAB Hospital Human Resources, said she is “really excited about the location of the stadium — its proximity to downtown and UAB. I think UAB is on the right track and it’s going to be great to see them in a new stadium.” Johnson also is looking forward to making her own family memories. “One of my main reasons for purchasing tickets was to be able to come out to the games with my family,” she said. “I have a son who is a senior in high school, and I felt it would be a way to have some fun together. I’m glad that we are able to come out and experience game day in person, especially since last year we weren’t able to do so.”

Chapleau agrees. For her, Blazer games are a chance to reconnect with a larger UAB family as well. “We tailgate with a group of friends from our college days, the Greenbackers,” Chapleau said. “The group began as a few faithful fans soon after we graduated but has now grown to over 100 members that include faculty, staff, alumni, children, spouses, parents and friends.”

UAB’s student-athletes “continually amaze me,” Chapleau said. “Their ability to not only excel in athletics but also in academics is truly inspiring. They support us each day they come to class, eat at the Commons, volunteer with the Benevolent Fund and more. The least we can do is support them on Saturdays.”


Commit to the Blazers

Season tickets are on sale starting as low as $75. Select your seat location and order online today. (Single-game tickets also are available.)

Members of the UAB community, including employees, alumni and retired faculty and staff, can take advantage of an exclusive 10% discount on UAB Football (and UAB Men’s Basketball) season tickets. For more information, contact the UAB Athletics Ticket Office at 205-975-UAB1 or tickets@uab.edu.