Success is always in fashion here 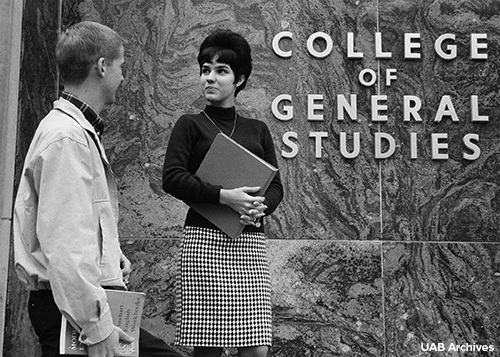 When the University of Alabama’s Birmingham-based extension program was officially renamed the College of General Studies in September 1966 — three years before UAB became an autonomous university — there were 4,600 students enrolled in business, education, engineering, humanities, natural sciences and social sciences courses.

UAB is focused on more than enrollment numbers; it also is dedicated to making campus the best it can be for its students. For the second year in a row, UAB has been ranked No. 1 in the United States — and No. 12 worldwide — in the Times Higher Education 2019 Young University Rankings, which are among the world’s most comprehensive, balanced and trusted.

INSIGHT Into Diversity magazine also recognizes UAB as a role model that sets the standard for U.S. campuses striving for inclusive excellence. The oldest and unyielding largest publication in higher education today presented its top honor — Diversity Champion — to UAB for its commitment to diversity and inclusion throughout campus communities, across academic programs and at the highest administrative levels.