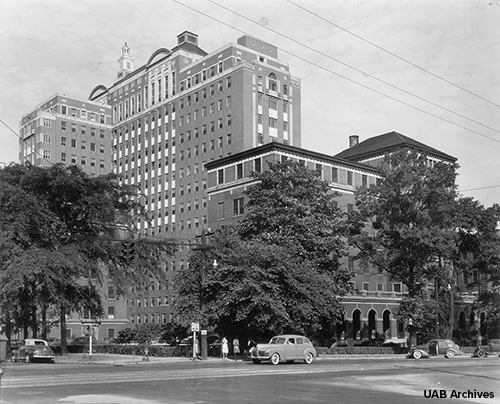 The complex long known as UAB Hospital was a collaboration between Jefferson and Hillman hospitals. In January 1929, a new wing of Hillman Hospital, pictured in the foreground in 1945, was dedicated as a major addition to the hospital. Decades later, the two buildings were dedicated as New Hillman Building and Jefferson Tower in the combined UAB Hospital complex.

In February, UAB Hospital was named one of the best hospitals in the nation by Healthgrades, a resource that connects consumers, physicians and health systems.

America’s Best Hospitals honors the nation’s top-performing health care providers, based on an analysis of more than 45 million patient records across nearly 4,500 hospitals over three years. The list honors the top 5 percent of hospitals in the nation for overall clinical excellence. UAB Hospital is the only Alabama health care facility to make the list.