Travel smarter, not harder, with CommuteSmart

In 2015, the average commuter in Birmingham wasted 34 hours and 16 gallons of fuel waiting in traffic. That’s the equivalent of missing 22 tee-ball games or more than four full nights of sleep, or releasing more than 314 pounds of carbon dioxide into the atmosphere — all to sit in traffic going to or from work.

CommuteSmart wants to help UAB employees save time on their commutes to work while also reducing air pollution in Jefferson and Shelby counties. Those who participate in the initiative's GetGreen program can receive up to $70 in the first 90 days for logging their alternative commutes — carpooling, walking, biking, teleworking or traveling via bus. 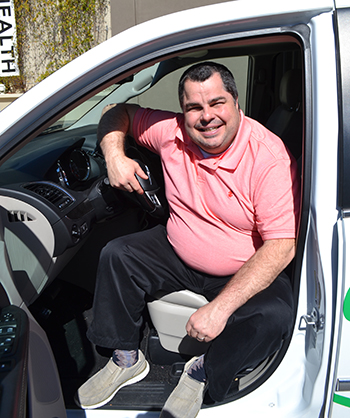 After that, participants can join the Commuter Club, where 20 or more alternative commutes during a three-month period can earn them a $25 gift card for mass transit or local gas stations, Publix, CVS, the Summit, Cahaba Cycles and Express Oil Change — even Blazer Bucks..

Only around 3 percent of UAB employees participate in CommuteSmart each year, but those UAB employees have reduced more than 10 million vehicle miles since 2008 — equal to about a year’s worth of reduction from all 114 participating Birmingham companies.

“Think about how many miles you live away from where you work,” said Brian Atkinson, CommuteSmart Business Outreach Manager. “If you live 11 miles away, you spend about $11 per day to get to and from work. Driving is so habitual that people don’t really think about it. They don’t think about how they could be taking $10 and throwing it out the window.”

Brian Harmon, a research analyst III with HSIS who lives in Pelham, has been vanpooling with CommuteSmart for nearly seven years, and according to him, it’s been nothing but a positive impact on his life.

He started vanpooling after gas prices skyrocketed to $4 per gallon and he and his wife adopted their first child. They lived in Alabaster at the time.

“Having a kid was expensive, and I was looking for ways to reduce expenditures,” he said. “Someone told me about CommuteSmart and that I could try out their vanpool for two weeks for free, and it turned out to be a lot better than I thought it would be.”

Harmon went from spending around $280 per month on commuting expenses to about $110 — and now that gas prices have lowered, his commuting costs total about $70, including fuel, van rental, taxes, insurance and maintenance on the van. Of the 10 people who vanpool with him, five of them are drivers, so he drives the van once per week.

When he first toyed with the idea of joining CommuteSmart, Harmon had the same concerns and questions many have: What if I get sick at work? What if my child or family had an emergency and I needed to leave?

That’s where CommuteSmart’s Emergency Ride Home program comes into play. Available five times per year to anyone registered and actively participating, CommuteSmart will provide a free taxi or rental car service in the case of an emergency, like the time Harmon got the flu at work.

“I woke up feeling sick and went to work anyway, but at about 9 a.m. I was getting dizzy, running a high fever and almost hallucinating,” he said. “It was the first time I’d called the Emergency Ride Home service. By the time I talked to my boss and packed my belongings, there was a taxi at the front door to the building.”

Harmon said that many UAB employees are likely deterred from taking alternative commutes because they believe they’ll miss the freedom of having their car on campus. He said he thought that as well at first, but has found the situation to be entirely different.

“In reality, CommuteSmart has actually freed me from the pressure of commuting,” he said. “I don’t have to worry about finding a parking spot or pay for parking every month. Unless I’m the driver for the day, I don’t have to deal with nutty drivers, so when I get to work, I’m not tense, and many days I’m relaxed by the time I get home.”

For more information about or to enroll in CommuteSmart, visit www.commutesmart.org.