The Latin roots for the term “engineer” are ingeniare, meaning to devise or dream up, and ingenium, meaning cleverness. UAB’s Amber Genau, Ph.D., put a new spin on that definition by designing two new core courses that explore the role of science and technology on world history. 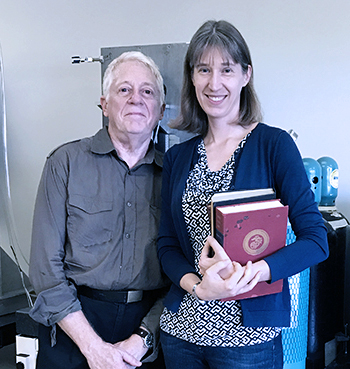 Amber Genau (right) and André Millard partnered to create new courses that shed light on the role of technology in learning “where we come from and where we are going.” Genau, assistant professor of materials science and engineering, partnered with history Professor André Millard, Ph.D., to create HY 106 and 107, two history classes that can be taken separately to satisfy a core history requirement or as a pair to satisfy a sequence requirement. HY 106 will focus on the Big Bang through the Industrial Revolution, and HY 107 will examine the Industrial Revolution through present day.

An academic adviser in her department, Genau, who is an NSF CAREER Award winner, said she saw a need for more niche history courses than the wide-angle approaches often taken in Western civilization or general United States history. After leading several study-abroad trips to Germany this past May to teach the history of engineering materials, she realized a similar class might be a way to fill that gap on this campus.

“We’ll be focusing a lot on how changes in technology have impacted civilizations around the world during the course of human history, looking at where we come from and where we are going,” Genau said.

The class textbook, "Big History: Between Nothing and Everything", surveys not just the facts, figures and events that make up history, but the overall big picture, Genau said.

“We won’t be looking at just what happened, but discussing the modern scientific tools that allow us to look at the evidence,” she said. “Starting around 1950, scientists developed tools that allow us to date things. You can’t have history unless you can put things in chronological order, and for a long time all we had were written accounts, so history was just about war and rulers and money. Now, things like radiometric dating allow us to figure out what happened outside of the rich and powerful, and go back to the very beginning of the universe.”

Hands-on for history
In addition to giving lectures themselves, Genau and Millard will use the wide range of expertise available at UAB, bringing in professors and lecturers from other departments to talk about subjects such as UAB’s Sustainable Smart Cities Research Center and ship-building and navigation in the ancient world.

“It will take advantage of what’s really great about UAB,” Genau said. “We have people who are experts in very different fields coming together to teach one course from different perspectives, and I think that will be fun and valuable for students.”

Mini field trips to places such as UAB’s foundry to pour metal and to Lister Hill Library to look at medical artifacts will help students better understand the development and impact of medical technologies.

“We are going to try to go a bit farther than you’d usually go with a core class,” Millard said. “Because we do have a focus on engineering, there’s going to be a lot of hands-on activity. Amber and I are big on getting students out of the classroom and getting their hands dirty, and teaching them there’s still room for craft skills and hand-eye coordination. It’s not all just looking down microscopes and telescopes.

Although the classes focus on technology’s role in history, Millard said it doesn’t mean the subject would appeal only to engineering or science majors; it’s open to anyone with an interest in history and learning ways that science helps people understand it.

“There is science in Neolithic cave paintings,” Millard said. “Decoding genomes has told us so much more about ancient history that isn’t just an ‘I guess.’ This is hard science. We know the DNA makeup of Neolithic people and Neanderthals; historians never had tools before to do that. There’s so much science in history today.”