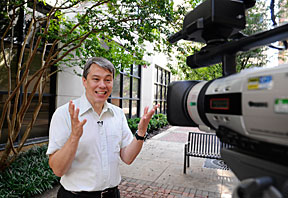 “I’m sure it’s very small — really, really small,” Cook says. “How many can say they believe their teaching skills would benefit from incorporating styles from a silent character’s physical comedy and two misfits with their own television show? I really believe they’ve benefitted me. I feel like a Japanese Mr. Bean, but with a larger vocabulary.”

Welcome to Cook’s innovative online Japanese 101 course, a joint production of the departments of Foreign Languages and Literatures, Communication Studies, Education and Theatre. The course, which Cook promotes as a call-in talk show all in Japanese, begins this fall.

For each class, Cook will connect with his students from locations around Birmingham through Skype. When students link up, they can expect to see Cook in locations including the Japanese Garden at the Birmingham Botanical Gardens and the concourse in front of the Hill University Center, among other locales.

“I want this to be unlike any other online experience,” says Cook, an adjunct professor in Foreign Language and Literatures and videographer in the School of Public Health. “I don’t want this to be an experience a student could get in a classroom. This is going to be a visual presentation — something to look at and listen to — and at it’s going to be interactive.

“No one learns a language by just watching a TV show,” says Cook, who goes by the name Tim Sensei for his class. “At some point you have to engage your tongue and talk to somebody and have that person talk back to you.”

Cook believes the uniqueness of content delivery will draw the students into the show, show them real-life situations and ultimately encourage more interaction.

“In some ways, it’s harder to teach foreign language in a classroom because you’re trying to create situations where students are expected to use the language naturally,” says Cook, who along with his wife Masako also teaches Japanese in the classroom. “On TV I can create some simple set that says, ‘This is a store and you’re a customer,’ and students will buy into that more easily than they will if you were pretending in a classroom. With video I can make my own little world and bring people into it.”

Learning on the go

Cook stumbled into teaching via camera in the late 1980s. He spent his 20s teaching English in Japan and China and wanted to teach Japanese when he returned to the states.

On his way back from China, Cook stopped in Hawaii for a vacation. He visited the campus of the University of Hawaii one day and stumbled upon job postings on a bulletin board in the foreign language department. One of them was to teach Japanese by satellite TV from Nebraska Educational Television.

Cook called the number on the announcement but figured the fact he had no television experience and a limited background teaching Japanese meant nothing would come of it. Instead, he was hired two weeks later.

Cook taught the course via satellite to students at high schools around the country that were part of a foreign language consortium.

“This was in 1988, before the Internet, and I literally had no experience in front of a camera,” he says. “I thought I would wilt. I’m not a real demonstrative person in real life; I’m more or less a wallflower. But when that camera came on, it was like vaudeville for me, and the students loved it.”

It helped that the director of the show was an amateur actress, Cook says. She trained him in stage presence and was serious about producing a TV show that was as entertaining to watch as it was instructional.

“She wanted it to be something that if somebody just stumbled across it, they would want to watch whether they were enrolled in the class or not,” he says. “That was the attitude I took, too.”

Georgia Public Broadcasting liked the course and brought Cook in to make a broadcast TV program teaching others to speak Japanese. Because it was recorded, Cook could not talk to students live, and he missed the interaction. Still, it was a valuable learning experience that has given him additional perspective as he resurrects and re-invents how to teach Japanese visually here at UAB.

“All of these things have informed what I do,” Cook says. “When I think about Georgia, it was a great experience. When I think about what we did at Nebraska, I think about broadcasting out of a studio and it reminds me of “Wayne’s World.” Wayne and Garth were doing their little TV shows themselves, and they didn’t answer to anybody. At one point, Wayne was broadcasting out of a moving vehicle, and I just thought, ‘Whoa, I wish I could do that.’ And now you can with Skype. I can take this course anywhere, transmit video to students watching and interact with them.”

More than just a language

Another unique aspect of the course involves its interdisciplinary nature.

Cook has recruited as many as 15 students from Theatre, Education and Communications to help him produce the course. Some of the students will act with Cook each class, and others will work behind the camera.

Many of the students have agreed to volunteer at the urging of their professors and mentors as a way to gain experience in their areas of study.

“I’m really going to owe a great deal to them, and I’m fortunate they’re going to do it for the experience and whatever good word I can put in for them,” Cook says. “But they really are enthusiastic about it. They can’t wait to do it.

“Whether these students are actors, communicators or future educators, I think they will get something out of it, especially the Education students who study foreign language teaching methods,” he says. “If they want to make online courses, and if they want to use video, there are things they need to consider that they probably aren’t going to learn anywhere else.”

The online Japanese course consists of 30-minute videoconferences each Monday, Wednesday and Friday this fall. There also will be 30-minute recorded video lessons, 20-minute conversation sessions and other online class activities. The content is the same as the standard Japanese 101 course “with the added bonus of a totally different experience,” Cook says.

Cook also plans to upload several of his first classes to iTunesU as a way to promote the course.