UAB graduate students Alison Barnard and Farah Khan have quite a bit in common. 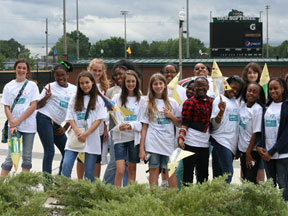 They met in middle school, graduated from high school together at Vestavia Hills and went off to college together — both earning undergraduate degrees from MIT — before coming home to UAB to start graduate school.

They also have one other thing in common — they love math and science and have a desire to see more young girls involved in it. Their appetite for math and science is so strong that they created Girls in Science and Engineering Day in 2011. It’s a day for local middle-school girls to come to UAB and participate in fun and engaging science and engineering activities led by female UAB professors, scientists and students.

This past year’s event was a major success, with more than 70 middle-school girls attending. This year’s Girls in Science and Engineering Day is scheduled for 8:30 a.m. to 3:15 p.m. Saturday, April 21 in the School of Nursing. More than 160 girls have registered.

“Alison and Farah really have a love of science,” says Melanie Shores, Ph.D., assistant professor of human studies and the group’s faculty advisor. “They want girls to have this opportunity just like they have. They want to see girls be successful.”

Math and science always have played a strong role in the lives of Barnard and Khan.

They met and became friends in middle school when they joined the math team, and they competed in math tournaments across the Southeast as high-school students. Barnard earned a bachelor’s degree in earth, atmospheric and planetary science at MIT, and Khan earned hers in environmental engineering. Barnard now is a third-year doctor of physical therapy student, and Khan is a third-year medical student. Barnard says because those disciplines affected her greatly, she wanted to share science with others.

In fact, the Anita Borg Institute recently published a study that shows that women comprise 48 percent of the workforce. However, when it comes to science, technology and engineering and math-related jobs, women hold only 24 percent of those positions.

Unbeknown to Barnard, Khan had joined an engineering group at MIT to mentor younger students. So when they came home and Barnard said she wanted to do something similar for Birmingham-area middle-school students, Khan was excited to be a part of it.

“I figured I could draw on my experience in Boston and we could create something like that here for girls in Birmingham,” Khan says. “I’ve always thought it was important for education in general to be impressed upon young girls early, specifically in fields that they may not otherwise be pushed to look into. I think that makes an even greater impact on them.”

Middle-school girls are their desired audience because research has shown this is the age at which many girls begin to lose confidence in their science and math abilities.

Khan certainly remembers middle school as a pivotal time in her school life. It’s when she experienced her first career day, which gave her new ideas for what she could pursue in school and as a career.

“Everybody has glorious and glamorous ideas in elementary school about what kind of job they want to pursue,” Khan says. “And in high school, you kind of already have preconceived notions put on you from middle school. I believe middle school is when people first start funneling more realistic careers into the minds of young students. Targeting that group and catching them before they get to high school where they already may have some opinion formed that we wouldn’t be able to affect is important.”

Barnard and Khan both say one of the joys of science for them is learning how and why things work.

“Science is used to make cars safer, to develop new medications and to forecast the weather. There is even chemistry involved in creating the perfect cookie recipe. As a physical therapy student, I use anatomy, kinesiology, and neuroscience to help patients,” Barnard says.

Girls attending the event will participate in two different workshops from the following opportunities:

The event is a collaborative effort of the schools of Education, Health Professions and Medicine and the departments of Justice Sciences and Biology and the Science and Technology Honors Program.

Other sponsors of the event include Vulcan Materials, Alabama Power, BioHorizons and Wilson Capital Management Inc.

Students from Jefferson and Shelby counties are expected to attend.

“This event will enable these female students to meet other females in the profession and let them see that it is possible for them to have a career in science, engineering and math,” Shores says. “This offers local girls an opportunity to see that females can succeed regardless of your ethnicity or socioeconomic status. Alison and Farah deserve a lot of credit for giving these students this opportunity. They are awesome, unbelievable really. They took this idea and ran with it, and it has an opportunity to make a difference in the lives of numerous young ladies.”