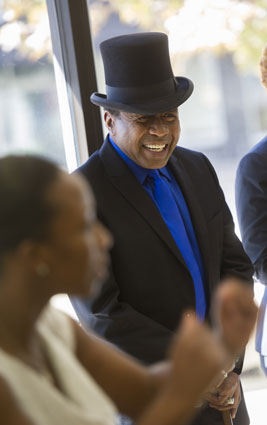 Ben Vereen is a Tony award-winning actor who has enjoyed a successful career on screens and stages both big and small, starring in projects ranging from “How I Met Your Mother” and “Grey’s Anatomy” to “Great Performances: Dance in America” and “Roots.”

So he didn’t have to make the decision to come public after he was diagnosed with diabetes during Christmas 2007. Vereen could have instead kept to himself, tried to enjoy the life he had left and chosen to live in silence — ignoring a disease that affects 25.8 million Americans, or 8.3 percent of the population.

But Vereen understood how the fear of the disease grips many, especially in the African-American community. So he decided to be a voice for those afraid.

And now he’s doing that here in Birmingham as part of Cities for Life — an innovative pilot project aimed at making Birmingham a model city nationally for treating people with diabetes. Made possible with support from Sanofi US, the project is built on working with community groups to create an environment that encourages healthy lifestyles and disease management. The program aims to achieve these measures by linking residents living with or at risk for diabetes with available community resources.

UAB’s Department of Family & Community Medicine, Diabetes Research and Training Center and UAB HealthSmart are working with the City of Birmingham, YMCA of Greater Birmingham and the American Academy of Family Physicians Foundation for this unique clinic-community pilot project.

The group began its work earlier this year and has reached the point where it’s ready to launch into the community and spread the word that no one has to fight diabetes alone.

“No one wants to talk about losing their liver, or a leg, or your sight,” says Vereen, a type 2 diabetic. “But we’re combating the fear factor. There is a movement starting, and it’s starting right here in Birmingham. It’s a healing movement that I hope will change this nation’s consciousness and the world.”

Birmingham was chosen for the pilot program in part because of numbers: One in three state citizens born after 2000 are likely to develop diabetes, according to the American Diabetes Association — one of the highest rates in the nation.

But another reason Birmingham was selected was because of the collection of medical expertise and resources UAB can provide and the relationships created with other community engagement groups. It’s a recipe that can result in the grassroots program needed to leverage the collective strength of Birmingham’s medical neighborhood.

“These are smart, dedicated people in Birmingham who were interested in coming forward and setting a model for care that could work for the rest of the country,” says Ed Fisher, Ph.D., of the American Academy of Family Physicians Foundation.

More than 40 community groups and citizens have signed on to be part of the project, and a website — mydiabetesconnect.com — has been created to invite more to participate. Organizations that would like to take part can register at the website. The community groups involved celebrated the launch of the program Nov. 1 with a dinner in Vulcan Park as part of Diabetes Awareness Month.

Cherrington says it is common for her newly diagnosed patients to feel afraid, and, just as important, disconnected from resources to help them in their fight. Cherrington says many community physicians also are in the dark on what community assets are available to their patients.

As UAB and other local organizations including the YMCA, the American Diabetes Association and others began discussions on Cities for Life, they all agreed that each group needed to know what the other was doing. They needed to take that knowledge and develop a comprehensive list of options for patients so they can find the community resources for their particular needs.

The new website, mydiabetesconnect.com, came about as a response to the identification of that gap.

“Our hope is that by increasing conversation around diabetes, we can identify some of the resources that are out there but people may not know how to find,” Cherrington says. “We want to make these resources obvious for people so they can manage their condition in a way that can benefit their lives.”

The group is using a two-pronged strategy to gather the resources for the website, first by identifying places that can help with the program’s goals and also by the development of community action teams. These teams reach out to community members who work with those with diabetes and direct them to the website so they can make contact with personnel who can show them how the website can be a handy tool for care.

“People can go to the website now and upload a community resource, and it will be fed into a database that is connecting real-time contacts,” Cherrington says. “We want to make sure the website is maintained and up to date at all times, and we can do that through the support from the UAB Diabetes Research & Training Center.”

The Minority Health & Health Disparities Research Center’s (MHRC) role in Cities for Life also is that of outreach. UAB HealthSmart already provides free health profile screenings that include blood sugar results to help detect signs for early prevention. Joanice Thompson, community outreach manager at the MHRC, says the group can use existing vehicles like this one to reach those in the community who need health education.

“We do the outreach here; therefore, Cities for Life didn’t have to reinvent the wheel to reach the citizens,” Thompson says. “And HealthSmart furthers its reach to so many more people via Cities for Life. Working together we are helping to close the gap on Alabama’s high-risk numbers. We must work together to help our city, and our nation, to heal.

“We want to make sure we reach the people who need the information the most, and that’s usually in the underserved communities,” Thompson says. “Our focus is trying to close the health disparities gap.”

Cities for Life is about more than just educating the local populace on how to live with the disease. It’s also about teaching everyone how to recognize the warning signs and how to provide support to loved ones who are diagnosed.

For example, Vereen says all of the clues of the disease where there for him five years ago — dry mouth, frequent urination, feeling lethargic and not wanting to exercise — but he didn’t know it. He thought it was perhaps just a product of getting older. Finally, one day he collapsed, and the diagnosis came a short time later.

Learning how to live with diabetes then became his goal, and with the support of his family, he has been able to thrive. That support, he says, can make a difference in the lives of an entire family — even if it is just one person who is diagnosed.

“If a family goes to their physician and asks how to support them, they have ways to show them how to do it,” Vereen says. “Of course one of the ways is making sure they take their medication. But if everyone in the family also changes their eating habits and exercises together with them, the entire family gets better.”

It’s only been discovered in the past 20 years that managing blood sugar and body weight would reduce complications of diabetes. Fisher says many in our culture still operate under the old knowledge that diabetes is a death sentence and nothing can be done about it. That’s just not the case, he says. Diabetes is a disease, not a lifestyle.

“We’re trying to create a sea change with Cities for Life where people can grasp their life and live it,” Fisher says. “And we also want them to get the support and encouragement they need from the community around them to do that well. That’s why I really admire Mr. Vereen’s bravery. He’s made a living dancing and performing. He doesn’t need to tell anyone he’s got diabetes, but he’s helping spread the word.

“And because of the good people in Birmingham, we’ve gotten Cities for Life moving substantially in less than a year, which is really remarkable. We want this community to know that diabetes or any disease is not causes for shame. These are causes for recognizing that we’re all human, we all have feet of clay, and we all need to pull together.”