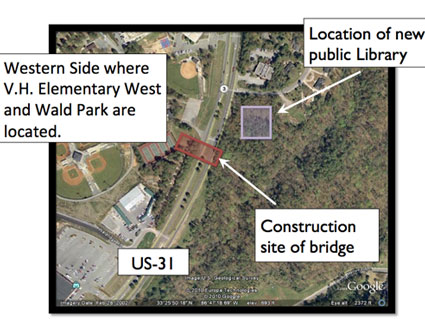 UAB’s School of Engineering and the Sustainable Smart Cities Research Center are working with the City of Vestavia and Gresham, Smith and Partners to develop and construct an innovative pedestrian bridge that will cross over U.S. Highway 31.

Christopher Waldron, Ph.D., assistant professor of Civil, Construction & Environmental Engineering, recently presented nine structure options to the Vestavia City Council for a sustainable bridge that would connect parking at Wald Park on the west side of Highway 31 with the newly constructed library on the east side.

“Our primary role is to help bring some innovative ideas to the project,” Waldron says. “We’re definitely trying to do some type of structure alternative that has not been done in Alabama.”

“We like to do things that are outside of the box, and this project qualifies as that,” adds Fouad H. Fouad, Ph.D., director of the Sustainable Smart Cities Research Center, which brings together multidisciplinary faculty with diverse expertise to develop tools and methods for sustainable infrastructure design. “A pedestrian bridge over a major highway? Not many universities have a chance to take on a project like this. We are also looking at implementing a number of sustainable and green construction features in the design of the pedestrian bridge.”

The City of Vestavia has had an interest in the pedestrian bridge project for several years, dating back to former UAB President Charles McCallum’s second term as mayor of the city. McCallum, mayor from 2000-2008, approached Fouad and Barry Andrews, Ph.D., chair of Materials Science & Engineering, about how to best approach the project.

The city looked at several options early on, including the construction of a tunnel under Highway 31, but ultimately decided a bridge was more practical.

McCallum earmarked city funds for the project and Alberto Zaragoza, the current mayor, has remained enthusiastic about completing it. Fouad and Andrews were able to secure a $200,000 grant for the innovative design portion of the project through federal funding, and now the bridge is closer to reality.

Christopher Brady, Vestavia’s city engineer, says he hopes the city will finalize the design of the project within six months. It will take about that long for the city to select one of the proposed designs, have Gresham Smith & Partners complete the drawings and go through the review process with the Alabama Department of Transportation, which has final approval of the project because the bridge will go over a state highway.

Among the proposals before the Vestavia City Council are structures made with fiber reinforced polymers (FRP); an FRP deck has not been constructed in Alabama to date. Such decks have been used in other states, but FRPs are still relatively new materials.

Another innovative aspect UAB has recommended is to maximize the use of precast components in construction, or concrete elements that are cast at a concrete plant and shipped and assembled on site. It’s an idea that fits into the Federal Highway Administration’s desire for accelerated bridge construction projects.

“Their motto is to get in, get out and stay out,” Waldron says. “They want durable structures with lots of pre-stressing, un-cracked concrete so that they last a long time and we can stay out and don’t have to go back. Plus, significantly reducing the on-site construction time would be especially beneficial in this case because Highway 31 is such a heavily traveled road. The less impact we can have on Highway 31, the lower the construction cost is going to be. ALDOT will factor in the impact to the public and how fast we can get out of the way in the approval process.”

The FRP decks provide many of the advantages all of the involved parties want to pursue, including from a maintenance standpoint.

FRP decks, though exposed to the atmosphere, don’t corrode like steel. They also are much lighter than concrete and have a fiberglass feel to them, which is why UAB’s Materials Processing and Applications Development (MPAD) Composites Center also is involved in the project.

“FRP decks reduce the overall weight of the structure, and that’s where Barry Andrews’ group fits in,” Waldron says. “They have a composites group that does a lot of work with FRPs. They’re working on that. and in addition to the deck, they’re looking at composite railings so we don’t have to go in and paint railings. Again, it’s that long-term, maintenance free approach.”

Another unique aspect of the project is aesthetics. The city has requested designs that are eye-pleasing and fit in with the overall feel of the city. And with its location — near the city’s southern boundary — the bridge will serve as a gateway to the community.

“We were looking to Chris to really help incorporate some type of aesthetically pleasing bridge,” Brady says. “His ideas, combined with the architects at Gresham Smith & Partners, give us some excitement that we’re going to get a nice landmark.”

“We certainly want it to be something the city is going to be proud of,” Waldron says.

Students in Civil and Materials Engineering also have been involved in the project and have worked on aspects ranging from preliminary design to literature surveys.