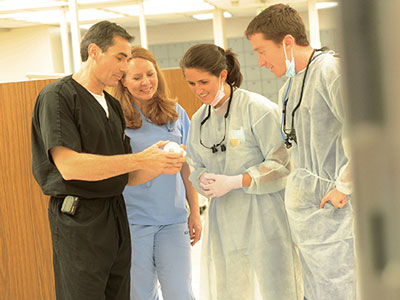 The institute is the primary sponsor of dental, oral and craniofacial research and research training for the NIH.

“The highest rank the school has received in recent years has been fourth,” said Michael Reddy, D.M.D., D.M.Sc., dean of the School of Dentistry. “These rankings illustrate UAB’s and the school’s leadership position in dental research. We have some of the top minds in dental research in the United States and the world at UAB, and this is a testament to our hard work and dedication to the nation’s oral health.”

UAB as a whole was awarded $12,935,420 from NIDCR is 2012. This total includes the School of Dentistry’s funding, as well as nearly $500,000 received by the UAB Departments of Genetics, Surgery, Microbiology, as well as Cell, Developmental and Integrative Biology, in the School of Medicine. In 2011, UAB also ranked 15 overall, with $6,385,752 in NIDCR funding.

The majority of the NIDCR funding increase, Reddy said, is due to the new National Dental Practice-Based Research Network. The seven-year, $66.8-million grant announced in 2012 has created a national dental practice-based research network, consolidating the institute’s former three regional research networks into a single, nationally coordinated effort. It is housed in the UAB Department of Clinical and Community Sciences under the leadership of Gregg Gilbert, D.D.S, M.B.A. The school received $9,976,266 for the project in 2012.

“Rankings such as these are mostly a way for us to compare ourselves with other universities and dental schools across the country,” Reddy said. “But the good news for our patients is these numbers are a testament to the fact that our faculty are making major contributions to the field of dentistry, bringing new treatments to our patients sooner, and disseminating that information to our students–the dentists of tomorrow. And for that, we are very proud.”