This is the fourth in a series of profiles of the six finalists in the UAB Grand Challenge. The initiative, a key component of Forging the Future, UAB’s strategic plan, launched this past summer and inspired more than 75 initial entries from teams across campus. The results were announced on April 30, with the Healthy Alabama 2030 project selected as the inaugural UAB Grand Challenge winner. 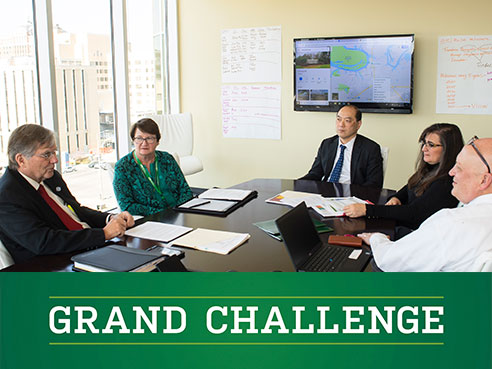 The Alabama HOPE Project "builds on the positive approaches" that are already in rural and urban communities to bring transformation to people through health, opportunity and education, says co-principal investigator Virginia Howard (pictured above, second from left, planning with Demopolis mayor John Laney, Demopolis physician Ronnie Chu and UAB's Janelle Chiasera and John Cleek).In some ways, the communities in western Birmingham and Marengo County are opposites. One is urban, within sight of the skyline of Alabama’s largest city. The other is rural, with horizons that are dominated by pine trees. The communities share many things in common, however: poverty, marginalization and economic and health challenges. Life expectancies here are lower than the state average, which already is the second worst in the nation.

Local leaders have built relationships with UAB researchers to address some of these issues. But a project that is one of six finalists in the UAB Grand Challenge competition aims for something far more comprehensive: transformation.

West Birmingham and Marengo County are the two focal points for the Alabama HOPE Project: Transforming Urban and Rural Alabama into World-Class Communities. “It’s really about empowering these communities to work toward better employment opportunities and better health that leads to longer life expectancies,” said co-principal investigator Virginia Howard, Ph.D., professor in the Department of Epidemiology in the School of Public Health. HOPE — which stands for “health, opportunity, people, education” — “is a wonderful acronym for this, because we’re building on the hope and the positive approaches that are already there,” Howard said. One example cited by John Laney, mayor of the city of Demopolis in Marengo County, is the management and affiliation agreement between the city’s Bryan W. Whitfield Memorial Hospital and the UAB Health System. “Having the UAB logo on the hospital sign has done a tremendous job of ensuring confidence and bringing people in,” Laney said. “That has been a big part of helping us improve.” Further connections with UAB faculty aim to meet more of the community’s needs, including workforce training, health education and economic development.

“There are a lot of great things happening in Demopolis,” said Janelle Chiasera, Ph.D., chair of the Department of Clinical and Diagnostic Sciences in the School of Health Professions and co-principal investigator for the Alabama HOPE Project. “What we want to do in Marengo County and west Birmingham is to facilitate even more opportunities.”

The Alabama HOPE project emerged from the Grand Challenge retreat this past fall. “It was an opportunity to brainstorm some wild and crazy ideas and meet people at UAB who have the same passions as you,” Howard said. “This isn’t the group I was in initially, but I learned about what they were planning and said, ‘I like your idea better.’ This was an opportunity to merge and collaborate on how we could make this even bigger.”

Howard is the lead epidemiologist for the long-running REGARDS study, which has enrolled more than 30,000 people across the country to examine racial and geographic differences in stroke risk. Research based on REGARDS data has shown that African-Americans are more likely to have deadly strokes at early ages than white people, that living in a neighborhood with lower socioeconomic status increases risk of stroke and that diet can play an important role in lowering high blood pressure, or hypertension, which is a prime factor in risk of stroke. “If we can make some early changes in diet, which research shows can make a difference, we can really affect these communities,” Howard said. “We can put this research into action.”

West Birmingham and Marengo County were chosen because members of the project team already had done work there and “they have been great partners, very motivated,” Howard said. The Alabama HOPE team includes faculty from UAB’s schools of Health Professions, Education, Public Health and Medicine. 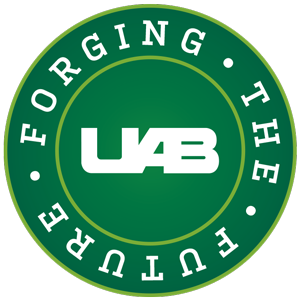 With its $30,000 planning grant from the Grand Challenge committee, the team held listening sessions in the two communities. “We wanted to know what they see as some of the biggest problems and barriers and where they would like to be,” Howard said.

Ronnie Chu, M.D., a family practitioner who operates the busiest clinic in Marengo County, has lived in Demopolis for 19 years. “This is a wonderful place,” he said. “But the population is getting older and many kids grow up and leave town. The ones who remain, too many are 16 and 17 years old and are morbidly obese. Everyone knows something needs to change. We’re grateful to work with UAB to do something.”

“This truly is about generational change,” Chiasera said. “We are integrating education and health in a way that is customized to the communities.” The School of Education’s UABTeach program, for instance, can work with local school systems to mentor teachers, Chiasera explained. This would help raise ACT scores and WorkKeys scores, inspiring high-schoolers to pursue much-needed careers in STEM (science, technology, engineering and math) fields and also boost job-readiness for students who opt to go right into the workforce. When a potential employer thinks about moving to a town such as Demopolis, “the first thing they do is look at the schools and say, ‘What is your average WorkKeys score?,’” Mayor Laney said. Communities with low scores “will not even get a look.”

Interrelationships of health, education and economics

It is impossible to separate health needs from education and economic resources, Howard said. “It is important to know that you should monitor hypertension and diabetes, but you have to have access to assessments in order to do that.” Creating the framework to attract new employers and the businesses that will encourage people to remain in their communities is essential, Chiasera added.

The Alabama HOPE project will work to connect economic, health and education opportunities. “We view this Grand Challenge through a human rights lens — the right to participate in decision-making processes, to have equity, inclusion and access for all,” Howard said. “It really is exciting to work on something that will have a long-term effect.”