Solve crimes — and find jobs — with satellites and spreadsheets 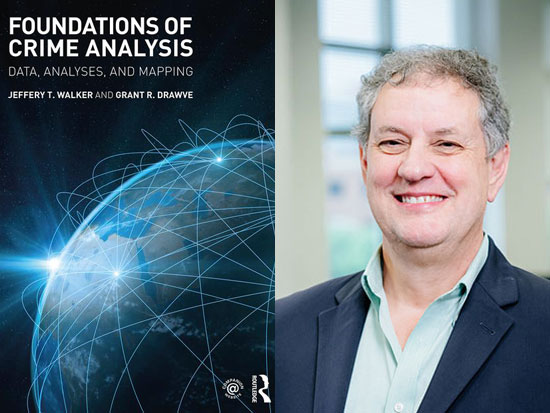 Digital mapping and analysis tools are powering a boom in crime analytics, said Criminal Justice Chair Jeffery Walker, Ph.D., who explores the day-to-day work of a crime analyst in "Foundations of Crime Analysis."In the mid-1820s, a French lawyer and statistician moved from the provinces to Paris and was hired by the Ministry of Justice. André-Michel Guerry discovered the new national crime statistics gathered by the French government and was so taken by these numbers — and the prospect of using them to discover deep social “laws” — that he gave up lawyering for good.

In 1829, Guerry produced a remarkable series of maps showing the distribution of crimes across France. In 1833, he published a famous “Essay on moral statistics of France,” which demonstrated that rates of crime and suicide followed recurring patterns of time, age, sex, season and geography.

They still do. Without looking at a police department’s arrest records, crime analysts can reliably predict that violence will peak in the summer months and on Friday and Saturday nights between 11 p.m. and 4 a.m., that burglaries are more like to occur during the day when people are not at home, and geographic and demographic patterns can point to hotspots in which crime is more likely to occur.

Guerry was arguably the first crime analyst, notes Jeffery Walker, Ph.D., professor and chair of the UAB Department of Criminal Justice, in his 2018 book Foundations of Crime Analysis: Data, Analyses and Mapping.

Walker and co-author Grant Drawve, Ph.D., a former doctoral student now on faculty at the University of Arkansas, explain how Guerry’s data-driven insights now are a regular part of police work for many officers. Digital tools such as Geographic Information Systems (GIS) have helped crime analysis spread in recent years. “It’s a very fast-growing field,” Walker said. “There aren’t nearly enough crime analysts out there to meet the need.”

In 2017, as Walker and Drawve note in their first chapter, the New York Police Department announced its intention to hire “around 100 crime analysts to assist their analysis-driven strategies at the precinct level.” Job postings show demand in police departments and law-enforcement agencies around the country. Walker, who built a strong crime analysis program at the University of Arkansas Little Rock before joining UAB in 2015, is expanding crime analysis and urban affairs offerings here, including hiring a new faculty member to teach GIS mapping in the department this year.

Foundations of Crime Analysis takes readers through the day-to-day experience of working at a major metropolitan police department and a smaller municipal force. Lessons in statistical analysis and crime theory are punctuated by real-life project examples, maps and reports from analysts working in St. Louis and other major metro areas.

The book is being used in university classrooms and by police agencies, Walker said. “Most are getting to the point where they understand they have to get a lot more data and base their decisions on that data, looking at the times and patterns of flow of crimes to make more efficient use of their resources, for instance.”

Neighborhoods at the tipping point

Walker’s own research interests focus on neighborhoods and their role in crime. He is part of a subfield known as environmental criminology. “The name is unfortunate — people think we’re worried about trees and fish,” Walker said. Their actual concerns are the ways in which place affects behavior. “If you give me about five Census variables,” — including the proportion of home-owners versus home renters, income and the age of the homes — “I can tell you if you have a good neighborhood or a bad neighborhood,” Walker said. “But the middle gets hard — what if you’ve got a bad indicator, some medium indicators and a good one? What pushes that neighborhood in one direction or another? That process happens over 50 years, more or less, and the analysis procedures we have now aren’t capable of separating out all the variables and interactions.”

During the course of time, once-independent variables — the age of houses, for instance — interact and form feedback loops. “As houses age, homeowners can’t sell and so they rent, for example,” Walker said. “That attracts a more transient population, which makes crime go up, which makes it even harder to sell and increases the number of rentals.”

Walker is exploring answers in chaos theory, which posits that small changes can echo through a system to cause unexpected, large-scale shifts. He has identified chaotic patterns in existing crime data, but further advances require new tools, he said. A few years ago, he presented his work at a complex systems symposium in Canada and was approached by a mathematician with a “lot of very specific questions,” Walker recalled. “At the end he said, ‘Mostly what happens is that people who come to us don’t really have math problems, they’re just not that good at math. What you’re trying to do, the math does not exist.’” Walker and the mathematician have been collaborating ever since.

He also has established several projects with UAB collaborators and contributes his expertise in GIS mapping. In addition to work on neighborhoods, Walker is involved in projects pinpointing the location of trees and water runoff on campus, for example. “Most of the advanced spatial analysis tools from ESRI [the mapping company behind the industry-leading ArcGIS software] came out of crime analysis,” he said. “But it applies in so many other areas. Once you learn to map and do analysis, you can contribute to many different fields.”