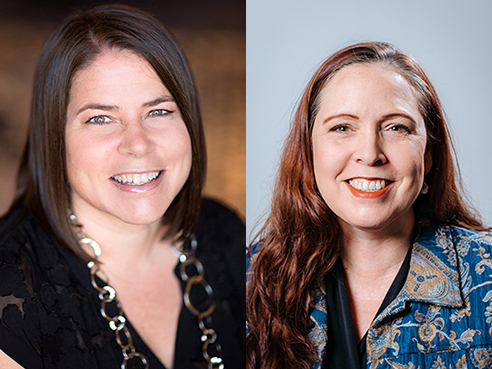 Colleen Fisher, Ph.D., (left) and Cathleen Cummings, Ph.D.Two associate professors from the College of Arts and Sciences have received Fulbright-Nehru awards to pursue separate research projects in India. Colleen Fisher, Ph.D., associate professor of social work, will examine microfinance as a way to alleviate poverty among vulnerable women in low-resource settings. Cathleen Cummings, Ph.D., associate professor of art and art history, will study and map deteriorating temple architecture from the Bhosle dynasty of Nagpur, India. Both will travel to India in 2022 due to COVID-19 travel restrictions.

India is a unique place to conduct her research, Fisher says. Many women in India live in extreme poverty, have no formal education and were raised to work within the home. This is problematic on many levels, Fisher says — especially when death of a spouse or divorce place the woman at the head of the household.

“Then you have a double whammy: Women who are trained through social norms to be stay-at-home mothers now have to provide for their children with no job skills or other training,” she said.

Microfinance, a nonconventional intervention that targets people who lack access to traditional banking and financial services, could be a solution for women in those circumstances, Fisher says. Her Fulbright-funded research will explore those possibilities.

Fisher is approaching the issue from the perspective of social work rather than an economic, business or managerial focus. It is a relatively new approach to the field, she says. The current research on microfinance options for women in India typically tracks loan-repayment status or income growth, but few questions are being asked about their lived experience with microfinance, the empowerment they gained from it or whether their literacy skills and health improved.

“There are so many ripple effects microfinance can have on women’s lives,” Fisher said. “There’s been almost no qualitative research, which we need to understand women’s lived experiences in order for women to have a voice in the process.” 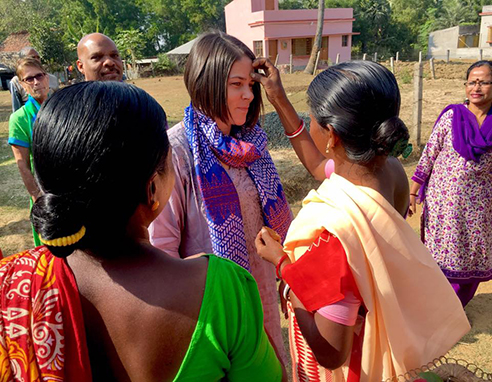 In 2016, Fisher received a traditional blessing and welcome in India's Bolpur village.Fisher will work alongside the women using microfinance to develop a data collection instrument called a Life History Calendar. Unlike a quantitative survey or interview comprising static questions, Fisher will work with the women to develop the instrument using both symbols and words, which will help women who are unable to read or write. Fisher, who also is a photographer, will shoot portraits of the women to illustrate their journeys.

“I want to contextualize that poverty doesn’t look the way people think,” Fisher explains. “These women are beautiful and proud, and I will try to take photos that highlight that.”

Because of the COVID-19 pandemic, Fisher does not know exactly when she will travel to India, but she expects to stay there about five months total during two separate trips. She also is the program director for the master’s in social work program and hopes to use her time in India to form study-abroad partnerships for UAB students.

Cummings plans to study temples from the Bhosle dynasty of Nagpur, India, in the 18th and 19th centuries and later. These generally have been neglected by art historians and scholars, she says, and with great consequence — many have been torn down, left in disrepair or converted into other uses, often with little to no record of their existences. This makes her work time-sensitive, she says.

Cummings plans to map every temple and sacred complex she can find. There is no comprehensive record of the temples still standing, and many temples are in private hands. For example, all that remains of one particular temple she will map is an inner shrine thatsits inside the car park on the ground floor of an apartment complex.

“The temple was privately owned, and the family could make money by converting the area into a block of flats,” Cummings said. “They kept the inner part of the temple but nothing else.” 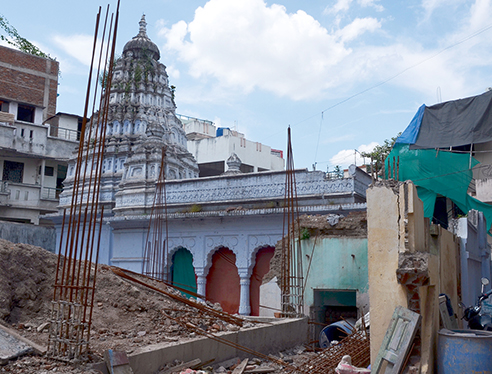 The Kalik Ram Mandir was built in 1803 and is still open for worship despite being privately owned. The mandir, or temple, has fallen into disrepair; plants grow from the temple tower and the parapet wall is damaged. It sits in an older part of Nagpur where many older structures have been torn down to make way for multistory flats.Many structures Cummings plans to study were built using a mix of brick, wood and tile and are vulnerable to the elements as the years pass. Another temple owner, in an attempt to preserve the historic structure, covered a leaking timber roof with concrete, only to discover that the wooden pillars couldn’t support the weight of the concrete. He has no more resources to dedicate to the project, Cummings says.

“Many of these structures are under threat, and we need to document them as best as possible,” she said. “And then we need to publicize them as much as possible with the idea of raising awareness and hopefully preserving them.”

Cummings will work to contextualize the temples in relation to British colonialism and Orientalist scholarship. The temples represent an understudied and significant corpus of Hindu architecture and sculpture and will provide a case study for understanding dynamics between the British and various Indian states in the 18th century, she says.

Cummings hopes to turn her research into a book documenting the existing temple architecture and chronicling the era’s history.

“There are 1.4 billion people in India.  A huge percentage of our world are Indians,” Cummings said. “It’s important to understand the rest of the world. If you dive in and look carefully, you can learn so much about history and culture and people and what they believed in, what was important to them, just by looking at what they made and cherished.”