Employees, students grow their own fruits and vegetables in UAB Gardens 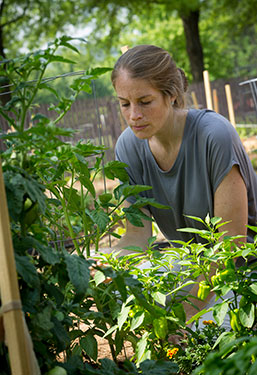 Julie PriceValerie Gordon has never planted a garden. Not at home or a friend’s house. Nowhere.

“I never felt I had time,” says Gordon, head of cataloging, staff development and marketing at Lister Hill Library. “I always had young kids, but now they’re teenagers and I have a little more time — and a nice place to learn how to do it.”

The place is here on campus at 850 8th Court South where 65 plots — all about 100 square feet — are tended daily by faculty, staff and students. Tomatoes, okra, squash, peppers and lettuce are just a few of the crops either burgeoning, well on their way to bearing fruit or, yes, struggling.

“For some, this is a way people can bring fresh herbs and vegetables home and use as part of their daily meals,” says Julie Price, Ph.D., coordinator of sustainability at UAB. “For others, this is a true learning experience.

“We have many faculty, staff and students who live in a dense, urban area, and they don’t have an chance to do something like this,” Price says. “This provides an opportunity to grow their own food or just enjoy being outdoors and gardening.”

Price and Stephen Watts, Ph.D., professor of biology, and members of the UAB Committee on Sustainability pursued the idea of starting a campus community garden on unused property as other universities have done, and UAB Facilities helped find a lot.

The lot selected was the best location available. It gets the most sun and has a fence to keep it secure.

After the lot was approved for gardening, Facilities bought water hoses and tools for participants to use. Campus Services and Grounds, headed up by Manager Tim Sullivan, tilled and amended the soil and installed water lines to prepare for what turned out to be an overwhelming response. 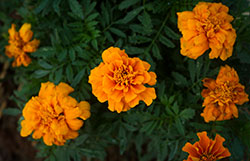 “I received more than 200 emails from interested participants when we first announced in April that we were going to do this,” Price says. “It was just amazing. We had an orientation for anyone interested. An Alabama Cooperative Extension System agent talked about how to select crops, grow them and handle pests. UAB’s Police Department came and talked about safety.

“We had such a huge response that we had to limit this initial opportunity to people who attended orientation. I have 75 people on the waiting list right now.”

As a result, many of those interested joined forces. Gordon, for example, teamed with library co-workers, Cara Wilhelm and Sylvia McAphee to manage a plot — as did Lister Hill staff Mary Wilson, Pat Higginbottom, Billie Monty and Cathy Beadlecomb.

“Our plot isn’t very impressive right now, but we’re beginning gardeners,” Gordon says of her group’s basil, rosemary, tomatoes, squash and flowers. “But it has been fun to see the range of things planted. It’s also fun when we go to water or weed; we meet people that we would never have a chance to meet. Some of the plots are very impressive.” 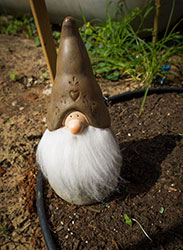 Kristi Menear, Ph.D., chair of the Department of Human Studies, has one of those inspiring plots, although she credits her husband Talbot for its design.

“He is an electrical engineering alum and the farmer,” she says. “I am the consumer.”

Afraid their schedules would not allow them to water as frequently as they would like, the group decided to install a water barrel and make a drip irrigation system controlled by an old garden hose timer they had lying around at home. They fill the barrel about once a week on average.

Menear was excited when she saw the university was making land available for a garden.

“I grew up with almost year-round gardens at my house and my grandmother’s house,” Menear says. “We’ve tried different approaches at our house, but there’s just not enough sunlight to support a decent crop.

“The other benefit to come from this is meeting the other people involved,” Talbot Menear says. “The garden is a social hot spot. Everyone is friendly, and it is easy to spend more time chatting with people sometimes than tending to the plants or pulling weeds. We’ve enjoyed it so much that we hope to see this project extended to a year-round garden.”

The sense of community the garden has created has been a welcoming addition, Price says. She developed the UAB Gardens Facebook page where those involved can join and communicate with each other.

“It’s been a good forum for them to work together,” Price says. “They are posting pictures of their progress and asking others to water their plots for them if they are going to be out of town on vacation. It’s a very communal group.”

Price also is developing a place onsite for gardeners to take any extra foods they grow to share with others in their community.

“It will be great to have a place where people can leave some food for others if they feel they have too much to use themselves,” she says.

If you have any suggestions for sustainability on campus, contact Price at juliegp@uab.edu.