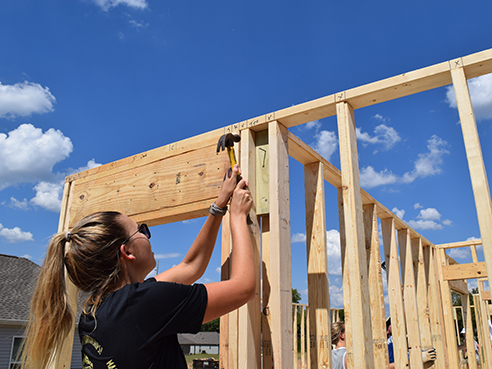 The fifth Habitat for Humanity Greater Birmingham home built by volunteers from UAB was dedicated with a ceremony Nov. 1.

Work began Sept. 20 on the home, located at 217 68th St. South in the Eastwood neighborhood. The project is funded by the UAB Benevolent Fund, and the home was built by 523 UAB community members who volunteered nearly 2,000 hours to complete it. All UAB employees are invited to the dedication and to tour the home

The new owner is Ames Farrell, who has lived in Birmingham all his life and graduated with an advanced diploma from Shades Mountain Christian High School and attended UAB. He is self-employed, running Ames Works, which specializes in yard work, chores and basic handyman jobs.

Farrell believes owning a home will help him because he will have his own place for the future, give him more room to live and to store his tools and help him to fulfill a lifelong dream. When asked what he would like to say to those who have helped to make his home possible, he said, “I believe that it is a greater blessing to give than to receive. I hope that you can get a double blessing from working with me.”

This is the fifth home built by a total of 2,853 UAB volunteers, who have given nearly 12,000 hours to providing homes for those in need in the Birmingham community.

Tiffany Wells, the 2017 UAB Habitat House homeowner, says she had never seen people give that much time and energy to anything as they did to building the home.

“That was a first for me, and it has changed my life because now I want to be like them, and I want to give like them and help people just like they have done for me,” Wells said.

See photos from throughout this year’s build on the group’s Flickr page.

Published in UAB in the Community