How a UAB lab tracks risky COVID-19 variants, and why that matters 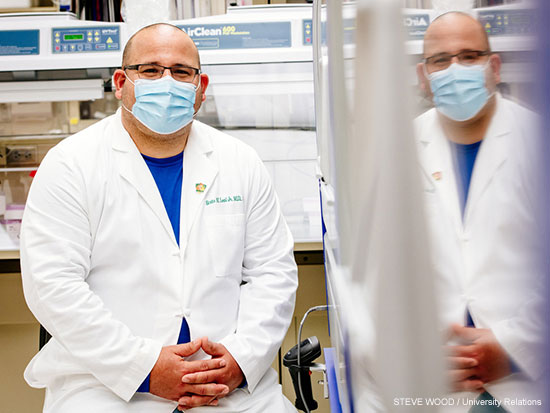 Sixto Leal, M.D., Ph.D., in the Fungal Reference Laboratory. “Given our thriving translational diagnostics research program we are often the first to evaluate novel diagnostic technologies and are constantly pushing the discipline forward,” Leal said.Viruses like to move fast and break things. One of the ways they achieve rapid growth is by doing without many of the error-checking mechanisms cells normally use as they copy their genetic material. That means mutations — random deletions, misplaced or just plain incorrect bases — are common, which isn’t necessarily a bad thing from the virus’s point of view. Many virions — individual virus particles — will have fatal errors, but the random alterations also sometimes hit on improvements that help the virus as a whole improve its chances of survival.

SARS-CoV-2, the virus that causes COVID-19, appears to have more rigorous error-checking systems than other viruses. A study in October 2020 reported that its error rate is 10-fold lower than that of other RNA viruses. But starting in late 2020, several concerning new variants emerged that improve on the original strain that predominated in the earlier stages of the pandemic.

The United Kingdom, or UK variant, B.1.1.7, has a large number of mutations and was first detected in the United States in December 2020; studies show its transmissibility rate is 50% higher than the original SARS-CoV-2 strain. New reports from the UK suggest that patients infected with the UK variant have an increased risk of death.

Small changes can make a big difference. The SARS-CoV-2 virus’s spike proteins, which it uses to gain access to human cells, are built from 1,273 amino acids (three “letters” of the genome are used to specify each amino acid). Researchers believe that the N501Y mutation, which switches the 501st amino acid in the spike sequence to tyrosine (Y) from asparagine (N), brings about a crucial change in the shape of the spike protein that improves its contact with human cells.

B.1.351, the South African variant, has some mutations in common with B.1.1.7, along with other key mutations to parts of the tip of the spike protein that help it bind more tightly to human cells and make it harder for antibodies to lock on. It was first detected in the United States in late January 2021. Early studies have shown that the Moderna vaccine may be less effective against the South African variant, although there is “still significant neutralization.”

P.1, the Brazil variant, has 17 unique mutations and was first identified in January 2021 in travelers from that country who arrived in Japan. It also was first detected in the United States in late January. Three mutations in the crucial receptor-binding domain of the SARS-CoV-2 spike protein may affect the ability of antibodies (from infection or from vaccination) to recognize and neutralize the virus, according to the CDC.

Even more recently, variants of unknown significance have been spreading in New York and California. (The fact that they are spreading indicates that they have some mutation that is beneficial to the virus, however.)

But how, exactly, do doctors know if a patient has one of these variants? 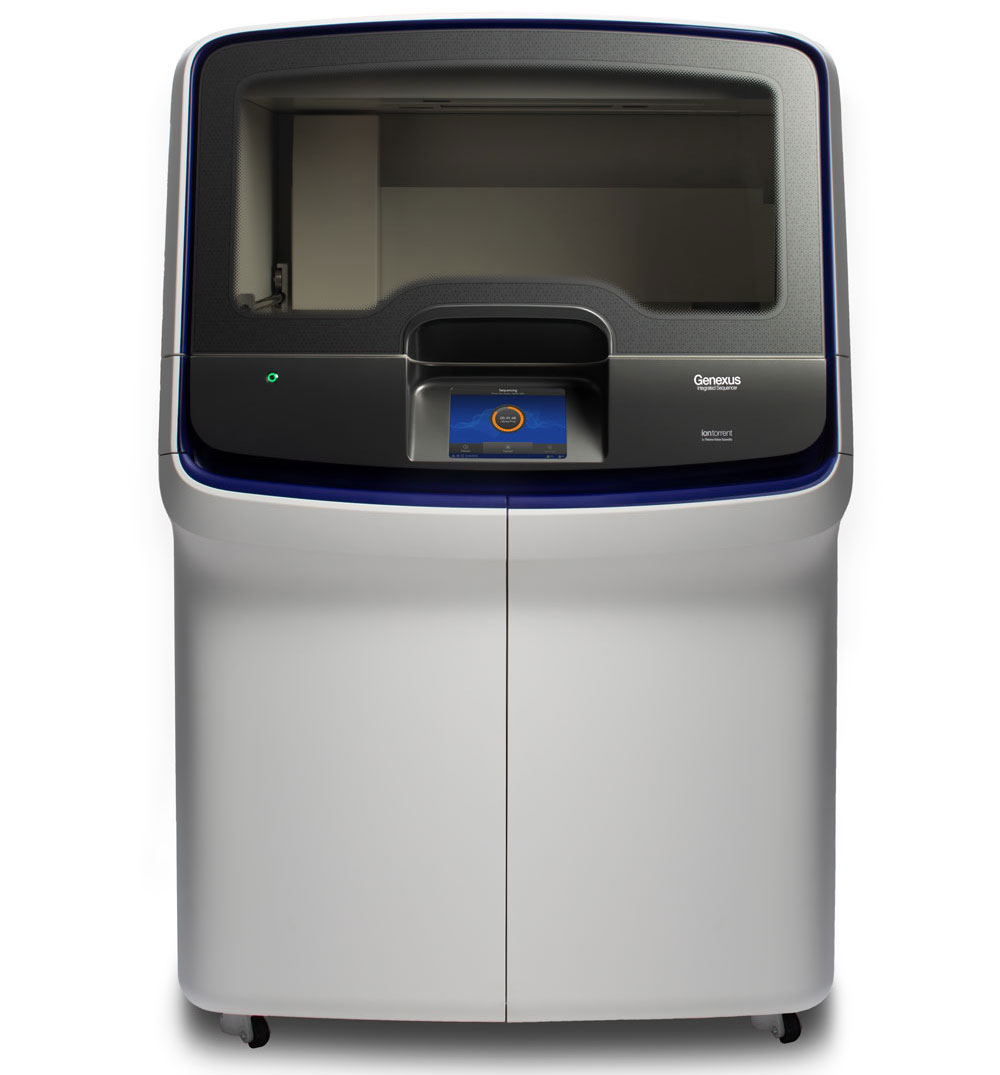 ‘Can detect any variant out there’

This is relatively simple in a facility such as UAB's Fungal Reference Laboratory, directed by Sixto Leal, M.D., Ph.D., assistant professor in the Department of Pathology. UAB has three Thermo Fisher Genexus systems capable of sequencing up to several hundred viral genomes per week, Leal said. "This sequencing can detect any variant out there."

Once they have a sequence, Leal and his team compare it with the SARS-CoV-2 reference genome and to lists of known variants.

At UAB, Leal explains, patient samples are sequenced if the patient:

When a variant is identified, Leal’s team immediately notifies the Alabama Department of Public Health, which begins intensive contact tracing. "If you identify a patient or cluster of patients with a particular variant, you may be able to stop it from spreading throughout the state," Leal said.


Sequencing not used routinely because of time, expense

But sequencing is not used in routine testing, because of the time and expense involved. "Sequencing is very complicated and very expensive, so you can't just sequence every single sample that comes through," Leal said. The Fungal Reference Lab's workhorse PCR machines can process thousands of COVID-19 tests per day, at a cost 10 times less per sample than sequencing, he points out.

By contrast, the sequencing process includes about four hours to set up each instrument and around 24 hours for the sequencing itself, Leal explains. Derek Moates leads the lab’s sequencing efforts. “We are a very well-rounded laboratory with expertise spanning from basic microbial culture to next-generation sequencing and each member of our team performs a variety of tests,” Leal said.

Depending on the sample, it can take anywhere from an hour "up to several days to ensure high-quality variant calls and lineage determinations," Leal said. His lab is actively engaged with Elliot Lefkowitz, Ph.D., director of Informatics in UAB’s Center for Clinical and Translational Science, for the bioinformatic analyses of sequencing data. "Active engagement with Elliot and his team is crucial for establishing automated pipelines to ensure rapid speed and high-quality, accurate data," Leal said.

By chance, one of the FDA-approved PCR tests for COVID-19 on the market offers a way to home in on patients who likely have the UK variant. Labs in the United Kingdom noticed that the Thermo Fisher TaqPath PCR test registers very low readings for the SARS-CoV-2 spike gene in the presence of the UK variant. This characteristic has become known as S dropout.

Starting in January 2021, Leal's lab started requesting that regional hospitals in Alabama using the TaqPath PCR test for their COVID-19 testing send any S dropout samples to UAB. The second sample they sequenced was positive for the UK variant, and so were five out of the first seven, Leal says. As of early March, the Fungal Reference Lab had identified 49 UK variants — which represent "all reported UK variants in the state to date," Leal said.

The available evidence suggests UK variants are still present at a relatively low level in Alabama, Leal added. "The hospitals that we are working with process 3,200 samples by these PCR tests every two weeks," and since they began sending S dropout samples to UAB, "we have detected less than 50 UK variants," he said. "Of course, it always starts low and then progresses. We know the UK variant is here, we know it spreads more easily and we know it tends to take over the population because it spreads so easily. But the more concerning ones that we know of are the South African variant and the Brazil variant. There is no screen for them right now."

UAB, the Alabama Department of Public Health and other Alabama hospitals and labs are now organizing a statewide system to test a random sample of all positive PCR tests in Alabama to enhance variant surveillance. "By doing random testing, you can get the true incidence of variants that are in the population," Leal said.

The development of a PCR-based screening mechanism for the Brazil and South African variants would be ideal, Leal noted. But there are other ways to flag cases where sequencing is warranted. "At UAB, we work with our infection-prevention team very closely — our lab functions as microbiology consultants for infection prevention — as well as Employee Health, practitioners involved in COVID clinical trials and the COVID clinic and pediatric infectious diseases division,” Leal said. “If there are particular cases where there is a severe presentation or an odd presentation of coronavirus, the samples that come into the laboratory can be sequenced. And then if we get variants of known significance, like the UK variant, we immediately contact our colleagues at ADPH."

Long before the COVID-19 pandemic began, the Fungal Reference Laboratory was well known in infectious diseases circles. Leal is a clinical microbiologist with doctoral training and specific clinical interests in medical mycology, which is the study of infections from pathogenic fungi. (Ringworm, yeast infections, Candida species and Aspergillus species are all common examples.) Historically, the lab has played a key role in many foundational trials in medical mycology.

“The lab was formed in part to provide laboratory diagnostics and microbiological support for clinical trials led by the NIH-funded Mycoses Study Group housed here at UAB,” Leal said. The lab is capable of performing yeast-susceptibility testing, mold-susceptibility testing, PCR tests for various fungal pathogens and sequence-based organism identification in addition to microbiome, mycobiome and host transcriptomics. “We also work with industry partners to evaluate commercial diagnostic tests, develop our own novel diagnostic tests and serve as microbiologic consultants and a reference center for many clinical trials in infectious diseases within and outside of UAB,” Leal said. “Given our thriving translational diagnostics research program we are often the first to evaluate novel diagnostic technologies and are constantly pushing the discipline forward.”

Early on in the pandemic, “the unique skill sets and flexibility in our laboratory enabled us to rapidly expand our efforts to focus on SARS-CoV-2, develop the first diagnostic test for the virus at UAB and help UAB and regional hospitals resume operations,” Leal said. Those characteristics also enabled the lab to develop a pooled testing strategy to allow testing at a scale that was large enough to enable a safe return to college campuses throughout the state of Alabama in summer 2020, Leal said. “Now it is helping us lead the way to identify the emergence of variants of public health significance in the state.”