Testing a promising treatment for functional seizures in children 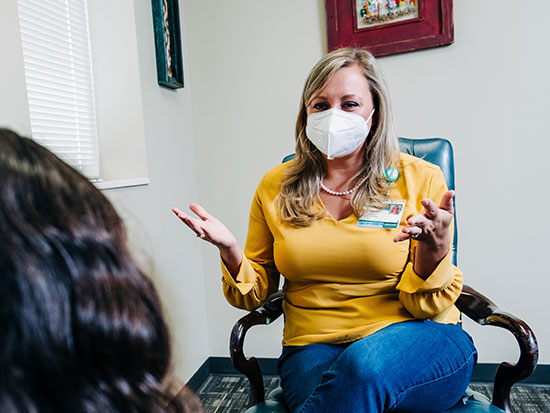 Aaron Fobian, Ph.D., has developed a therapy known as Retraining and Control Therapy (ReACT) to help patients with functional seizures. After a successful pilot study, she is now leading an NIH-funded clinical trial of ReACT. ANDREA MABRY | University RelationsEach year, about 20 percent of the 70 million people who are evaluated in epilepsy clinics turn out to have seizures that cannot be identified by any physical cause in the brain. The trouble, which typically begins in the teen or adult years, is known as functional seizures (also known as psychogenic non-epileptic seizures), and it is a diagnosis that is debilitating to most patients and their families.

Functional seizures are a type of functional neurological disorder, or FND, that also goes by the name conversion disorder. It means “any neurological symptom incompatible with a known medical or neurological diagnosis,” said Aaron Fobian, Ph.D., an associate professor in the Department of Psychiatry and Behavioral Neurobiology in the UAB Marnix E. Heersink School of Medicine. Fobian has developed a promising treatment for functional seizures and just received a multimillion-dollar grant from the National Institutes of Health to conduct the largest randomized controlled trial of any functional seizure therapy in children.

“Functional disorders are very real, but sometimes the diagnosis is communicated in a way that makes it sound like the health care provider does not believe there is anything wrong or that they think the patient is faking it. There is a great deal of stigma attached to this diagnosis. It’s a lot more common than people think, but you never hear about it.”

But first, she often must help clarify the diagnosis for her patients, and their parents, emphasizing that functional seizures are real and quite common. Patients are usually referred to the epilepsy clinic by their primary care doctor. “If they get a diagnosis from a doctor who says the seizures are epileptic, it’s often confusing when another doctor tells them it is a functional disorder,” said Fobian, who is a clinical psychologist specializing in care of pediatric and adolescent patients. “Functional disorders are very real, but sometimes the diagnosis is communicated in a way that makes it sound like the health care provider does not believe there is anything wrong or that they think the patient is faking it. There is a great deal of stigma attached to this diagnosis. It’s a lot more common than people think, but you never hear about it.”

In fact, functional seizures are as common as multiple sclerosis and Parkinson’s disease, note the Stanford University authors of a 2016 paper. The gold standard for diagnosing a seizure is a video electroencephalogram, or EEG. If a patient has a seizure but it does not produce characteristic change on the EEG, epilepsy specialists will diagnose functional seizures. But it often takes years for a patient to get an accurate EEG-confirmed diagnosis, the Stanford researchers note, during which time “unnecessarily aggressive treatments for epilepsy may result in over-sedation, intubation and vagus nerve stimulator placement. In a follow-up study, 44 percent of patients with functional seizures had poor outcomes (defined as not being seizure-free and remaining dependent).” 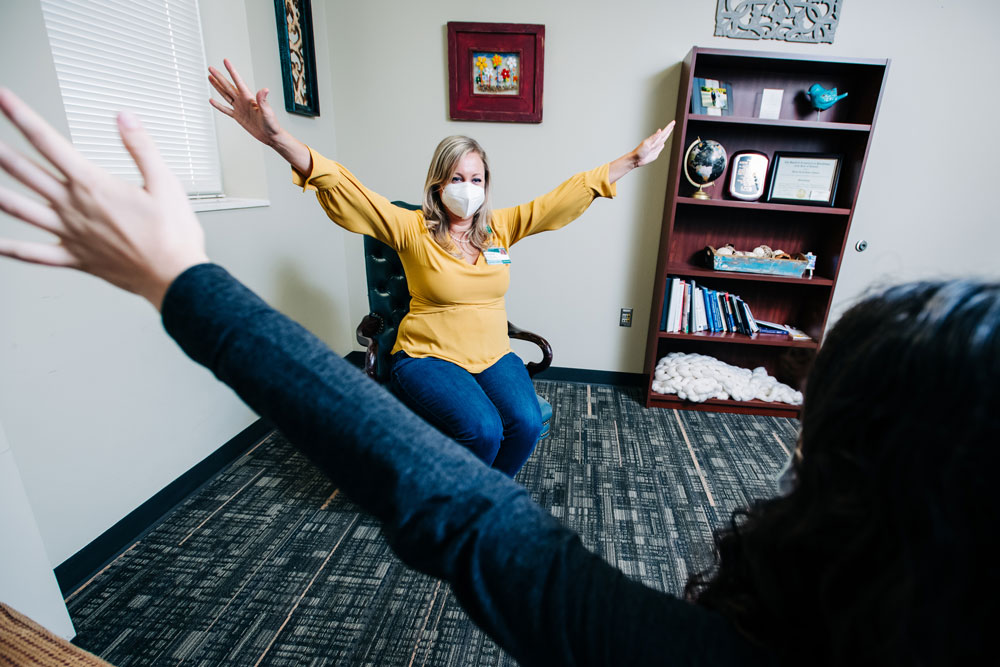 As a part of ReACT, patients practice opposing physical responses to their seizure symptoms. "The majority of patients can tell when an episode is coming," Fobian said. "They start doing these opposing responses to prevent the onset of an episode." ANDREA MABRY | University Relations


“You retrain your control over it”

At UAB and Children’s of Alabama, pediatric patients diagnosed with functional seizures are referred to Fobian’s clinic. A fairly typical case is the 18-year-old white female patient described in a 2021 paper in the journal Epilepsy & Behavior Reports by Fobian and Jerzy Szaflarski, M.D., Ph.D., professor and Epilepsy division director in the Department of Neurology.

"This is a reflexive, learned response, and new learning can suppress the old learning. Patients do not feel that they have control over functional seizures; but we tell them, ‘You retrain your control over it.’"

The patient had been referred to Fobian with a diagnosis of functional seizures. Her seizures exhibited a variety of symptoms, including loss of consciousness, jerking, memory loss, temporary blindness, crying and laughing. She had been experiencing the seizures for four years at that point; they currently were occurring every week to 10 days and lasted about an hour. Triggers included stress, interacting with her mother, and separating from her friends or boyfriend after spending time together. She was currently not able to attend college or work due to the seizures. She had tried several different therapies that “mainly focused on addressing depression and her significant trauma history, which resulted in little improvement” in her functional seizures, Fobian and Szaflarski write.

That is, until the patient took part in a unique form of therapy developed by Fobian. Known as Retraining and Control Therapy (ReACT), it targets catastrophic symptom expectations by offering patients a new biopsychosocial cognitive model and targets sense of control “using techniques of habit reversal, a behavioral principle that is used for tics in Tourette’s syndrome,” Fobian said.

“The idea is that you do an opposing physical response that prevents you from having the symptom,” she said. “The majority of patients can tell when an episode is coming. They start doing these opposing responses to prevent the onset of an episode. This is a reflexive, learned response, and new learning can suppress the old learning. Patients do not feel that they have control over functional seizures; but we tell them, ‘You retrain your control over it.’” The therapy is adaptive, with weekly training and goals based on the patient’s individual responses to treatment. “Functional seizures are not usually a one-size-fits-all condition,” Fobian said. “We can optimize the treatment based on how they are responding.”


“The most rewarding thing I can do”

“It’s the most rewarding thing that I can do as a psychologist,” Fobian said. “These patients are incredibly distressed, and we help them get better. They go back to being able to drive and live their lives without stigma or fear. There are certain situations in which this can pop back up, but we can prepare them in case that happens.”

“These patients are incredibly distressed, and we help them get better. They go back to being able to drive and live their lives without stigma or fear.”

In a pilot study published in August 2020, ReACT “resulted in a significant decrease in functional seizures in children, even in the absence of decreased anxiety or depression symptoms,” Fobian and co-authors wrote. This is the only pediatric randomized trial of pediatric functional seizures to date. Of the patients who took part in ReACT, 82 percent remained seizure-free for more than two months. The power of the therapy was evident in the efforts that patients and their families were willing to make to seek treatment. “My patients come from all over — from Mississippi, the Panhandle of Florida,” Fobian said. “In the pilot study, two of the first three patients drove to UAB from the Gulf Coast every week for the chance to take part.”

In July 2021, Fobian was awarded a multimillion-dollar R61/R33 grant from the National Institute of Mental Health that will allow for an expanded randomized controlled trial of the therapy in children diagnosed with functional seizures who are between 11 and 18 years old. In the first phase of the study, participants will engage in 12 ReACT sessions. Before and between some of those sessions, Fobian will measure participants’ sense of control, catastrophic symptom expectations and stress levels using questionnaires and responses to a challenge in which they hold their hand in cool water for up to three minutes. In the second phase of the study, participants will be randomized to either receive ReACT or supportive (talk) therapy, with outcomes — numbers of seizures experienced — recorded for each group up to six months after treatment. (To learn more about the study, call 205-975-4205 or email pedshealthlab@uabmc.edu.)

So what is going on? Fobian likes the traffic analogy used in a recent podcast on the Havana Syndrome that has affected U.S. diplomats in Cuba and beyond since 2017. (Some experts think the symptoms may be caused by a secret energy superweapon wielded by U.S. foes, while others suspect they are the result of functional neurological disorders.) Imagine the brain as a busy city center, the show’s host says, with neural pathways laid out like streets. An accident or construction may occasionally require traffic to follow a different route temporarily until regular service is restored. But sometimes the brain forgets to take down the detour signs after the incident has passed, setting up a recurring pattern of behavior. For example, a virus might trigger an episode of vertigo, but the brain may perpetuate these symptoms even after the original cause has cleared up. “You have to retrain that to get it back to normal,” Fobian said.


No current treatments for the root cause

Functional seizures do not respond to seizure medications — or much else. There are currently no evidence-based treatments for the root cause of pediatric functional seizures, or any element of pediatric FND, Fobian said: “We know medication doesn’t work. People say, ‘CBT [cognitive behavioral therapy] works,’ but CBT is not just one thing — many different types of therapy go by the name of CBT.” Just a few examples of CBT types available include Cognitive Processing Therapy, Cognitive Therapy, Dialectical Behavior Therapy, Rational Emotive Behavior Therapy, Self-Instructional Training and Stress Inoculation Training.

In October 2021, Fobian received a two-year grant from the General Endowment Fund of the University of Alabama Health Services Foundation to establish an Interdisciplinary Functional Neurological Disorder Treatment Clinic and develop a clinical care pathway for FND at UAB.

“Which of them is effective?” Fobian said. “The one fully powered trial of CBT as treatment for functional seizures was in adults, and it did not reduce functional seizures at 12 months after therapy compared to treatment as usual. We’ve seen that with medication trials in adults as well. If you give patients antidepressants, their mood improves; but their seizures don’t.”

As evidence mounts for the effectiveness of ReACT therapy, Fobian hopes to establish an interdisciplinary clinic for patients with FND at UAB. “During the COVID pandemic, we’ve had an explosion of FND referrals,” Fobian said. “Some of that may be related to increased awareness of and attention to physical symptoms during COVID-19; but you’re also seeing a wave of posting about seizures and tics on TikTok, and TikTok really took off with teens during the COVID shutdown.

“We’re already meeting monthly with physical therapy, occupational therapy and speech pathologists who treat this,” Fobian said. In October 2021, Fobian received a two-year grant from the General Endowment Fund of the University of Alabama Health Services Foundation to establish an Interdisciplinary Functional Neurological Disorder Treatment Clinic and develop a clinical care pathway for FND at UAB. “This integrated clinical care pathway will guide treatment of FND patients from the moment they arrive at the hospital,” Fobian said.