The UAB Department of Obstetrics and Gynecology long has served as a referral center for complex gynecologic health care. However, until two summers ago, it had been without the services of a gynecologic team dedicated to children and adolescents for more than 10 years. 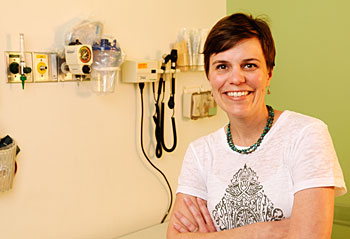 Kimberly Hoover, M.D., who joined UAB in 2007, wanted to develop a clinic specific to their care as part of her general practice because of her past experience treating children and adolescents.

The once-a-week, half-day clinic is open Wednesdays and provides inpatient and outpatient care for pediatric and adolescent gynecology from birth until age 19.

The clinic is funded by a two-year, $121,600 Health Services Foundation General Endowment Fund grant. The clinic enables Hoover to educate patients and provides educational opportunities for medical students, residents and other providers throughout the state and region on current guidelines and prevention strategies designed for the adolescent patient population, especially on the sensitive issues of sexually transmitted disease and teen pregnancy.

“We really do a little bit of everything here,” Hoover says. “For some of my girls, it’s talking about sexually transmitted diseases, birth control, family planning, contraception and other preventative health maintenance. Some doctors send me cases that include complicated and abnormal periods, ovarian masses and any kind of anatomical abnormality from birth.”

“It’s great that we’re here where anesthesia is set up for pediatrics,” Hoover says. “It keeps them from having to go through an adult-oriented clinic, which is great. Many of the girls are very, very scared when they come in. It’s a very sensitive subject, so to have it in a very kid-friendly environment makes it less stressful.”

Hoover fell into working with pediatric patients by chance while working in Indianapolis while her husband Wyn Hoover, M.D., now an assistant professor of pediatric pulmonology, was completing his fellowship.

“When I was in Indianapolis we had a very young population base that came into our GYN office,” Hoover says. “My partners there were older and they were all men; most little girls just weren’t comfortable seeing them, so they came to me almost by default.

“There was just a personality click for me with that age range,” she says.

She wanted to start the clinic here when she arrived, and space was found at Children’s Hospital to make the clinic a reality.

“We’ve had an influx of patients this year, which is a good thing,” Hoover says. “We’re currently in discussion to open up an afternoon clinic. We’re hopeful we’re going to be able to get something done soon so we can have an afternoon clinic to better serve those that are in school during the day.”

The American Congress of Obstetricians and Gynecologists recommends teenage girls make their first visit to the gynecologist between ages 13 to 15. Most insurance companies allow one initial visit without a referral from a primary-care physician, and Medicaid doesn’t require a referral. Call 212-7000 and ask for Pediatric Gynecology to make an appointment.