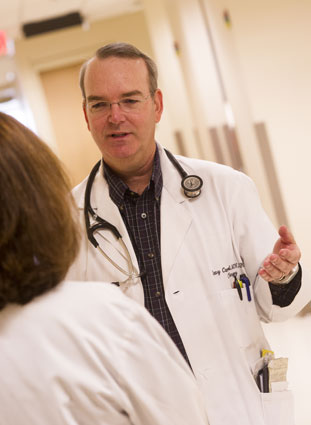 Many health care workers elect to go into their fields because they want to help those who are in need, and B. Davis “Davy” Campbell, a nurse practitioner in the cardiac surgery unit in UAB Hospital, was no different.

Then, a few years ago, he found his role reversed. Campbell was diagnosed with stage 3 bladder cancer and given a 15 to 20 percent chance of survival. Now cancer-free, Campbell was hit with the diagnosis in 2004 at age 43 despite having never smoked, suffered a parasitic infection or been exposed to radiation — all common risk factors of the disease.

Campbell, a 1987 UAB School of Nursing graduate who received his master’s in nursing from the school in 2001, quickly became a bladder cancer expert after his surgery in 2004. When he discovered there was no recent literature published on bladder cancer, he submitted a manuscript to the journal Nursing that was published in April 2006 under the title “Bladder Cancer: Revealing News About a Hidden Threat.”

After Campbell’s second bout with cancer and chemotherapy a few years later, he began to write again — this time not on the clinical aspects of bladder cancer, but on the physical and emotional toll of the disease.

From this was born the book A Place I Didn’t Want to Go: My Victory Over Cancer, which describes the highs and lows of fighting the disease and the spiritual strength Campbell gained along the journey.

“Davy’s tale is remarkable in that he has experienced a very wide range of treatments, each with their own dangers, complications and successes,” Bolger says. “His story is one of triumph, but also a reminder of how much further we need to go before all patients with this disease have a happy outcome.”

Campbell recently spoke with The Reporter about the success of the book, the rigors of chemotherapy and the emotional healing writing about his experiences brought to him.

Q: What were your immediate thoughts when you were told you had cancer?

A: Absolute shock and disbelief. What I thought would be a routine doctor’s visit turned into a nightmare. I jokingly told my doctor after he gave me the diagnosis, “Well, thanks for nothing!” but this wasn’t funny at all. I hurriedly called my family and my church and asked them to pray for me.

Q: How difficult was it to accept that you were going to have to be the one receiving care instead of giving it?

A: I had no choice except to face the diagnosis head on and all the treatments I would be receiving. Yet, I would soon learn that the treatments would be worse than I could ever have imagined. There was not a simple way to get rid of my cancer.

Q: How would you characterize the chemotherapy treatments?

A: Chemo was the darkest valley I’ve ever been through. It took me as low as I thought I would ever go. . . and then it took me even lower than that. The fatigue was unrelenting. The nausea was severe. I felt like practically every day while undergoing chemo was a day of torment.

Q: Was there ever a time when you thought to yourself, “Going through this just isn’t worth it?”

A: Yes. I was hospitalized five times when undergoing chemo for anemia and dehydration. I once argued with my oncologist that the benefits of my treatment were not worth the risks, that if chemotherapy was going to be this detrimental to my health then maybe it wasn’t worth the effort.

Q: Why continue to fight?

A. My oncologist, in his wisdom, disregarded my complaints and pressed on with my therapy. I later learned a great quote from Winston Churchill who said, “When you’re going through hell, keep going.” I felt compelled to keep going with the knowledge that I was only scheduled to have 12 chemo treatments. Eventually the treatments would end. I had a graph in my office with 12 sections on it. Every time I finished a treatment, I would color in another section. What a great joy when the graph was completely filled in.

Q: What was the primary purpose for you to actually put your experiences down on paper and, ultimately, write the book?

A: Being a member of the healthcare profession, I felt led to share all I had learned with my colleagues about bladder cancer in the Nursing2006 article. Whereas the Nursing2006 article was more of a technical article, i.e. signs, symptoms, diagnosis and treatment of bladder cancer, I wrote the book to describe my emotional and spiritual battle with cancer. Although I wrote the book to help others, in reality, I have discovered that the book has actually helped me.

Q: When was the moment — or was there one — where you finally just felt an emotional release about the whole experience?

A: I haven’t reached that point yet. However, as I continue to talk and write about cancer, I’m obtaining more emotional healing. In other words, talking and writing about cancer helps restore some of the damage cancer has done to my body. But, I may never get over it. It’s a continuous struggle.

Q: How is your health today?

A: I still have residual effects from my harsh chemotherapy treatments. I lost part of my hearing, have severe peripheral neuropathy in my feet and have damaged kidneys. Otherwise, I’m still able to work and do things I enjoy, although some things are more difficult, for example, running. The hearing loss is especially bothersome.

Q: And you’re happy to talk to individuals struggling with the disease or large groups, too, correct? How can people contact you?

A: It’s my life mission. I believe I was divinely entrusted with bladder cancer and recovery for a purpose. I don’t promise that everyone will survive cancer. Yet, I’m happy to talk to groups about what I did during my cancer turmoil to overcome it with God’s help. I can be reached at daviscampbell@bellsouth.net or via my blog at cancerovercomer.blogspot.com.

Q: Where can people purchase the e-book or a physical copy?

A: My book is available at Amazon.com and also on Kindle. I also have a few books available in the local authors section at the Book Warehouse at the Shops of Grand River in Leeds and The Little Professor Bookstore in Homewood. In addition, those interested may contact me directly at daviscampbell@bellsouth.net, and I’ll get them a book somehow.