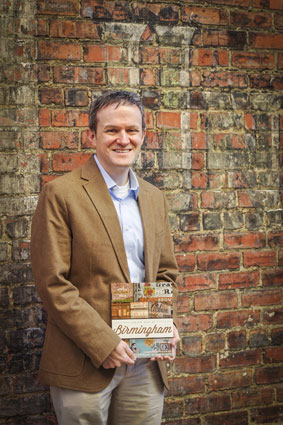 Now Buchanan, an editor in the UAB Office of Public Relations and Marketing, has combined each of those interests into his first book — Fading Ads of Birmingham, which was recently highlighted by ABC 33/40.

Fading Ads of Birmingham, published by The History Press with photography by Jonathan Purvis, explores the weathered advertising signs still visible on brick buildings throughout the city. Buchanan gives insight into the signs, some of which date as far back as the 1880s; they include the giant wall on First Avenue North, Tyler Grocery Co. Wholesale, Woodlawn Poultry Market, Golbro and countless others.

A Selma native and long-time Birmingham resident, Buchanan paints an illuminating picture of the men and women who built an industrial boomtown in the first half of the 20th century. It was their artwork, he says, that provided brilliant backdrops throughout the city. Buchanan’s own eye for art was highlighted in 2009 when he was featured on the Home and Garden Television show “That’s Clever!”

Buchanan spoke to The Reporter about the Birmingham merchants and artists who are the focus of his book, and of the difficulty in unraveling the mystery behind some of the signs.

Q. How did this project come about?

A. I began studying the fading ads several years ago as inspiration for my printmaking, and in 2010, Birmingham magazine asked me to write an article about them. A year later, the History Press saw the article and contacted me about writing a book. I already had considered writing a book about the ads, but I didn’t expect it to happen so soon.

Q. What were some of the challenges you faced trying to learn the history behind the ads?

A. Researching the ads directly is nearly impossible because most of the sign shops and painters who produced them are no longer around. The ads weren’t meant to be permanent anyway, so there aren’t any files on them. I had to do roundabout research, studying city directories, fire insurance maps and old photographs to see when buildings were constructed and what businesses occupied them throughout the years. When I found the names of companies or owners, I would search to find stories and details about them. I felt like a detective trying to solve the mystery of each sign.

Q. If you examine the signs from an artistic point of view, what are your impressions?

A. I love how many of the ads are layered atop older ads, and as they age, how the different colors and letters mix together to create something new and random. I’m also impressed with how detailed the illustrations and letters are up close, considering that the signs were designed to be seen from several blocks away. In recent years, artists and designers have rediscovered the appeal of lettering created by hand rather than computer, and these signs offer some prime examples. Each of these ads — some of which span a block or multiple floors of a building — is hand painted.

Q. How long did it take to complete your research?

A.  I had roughly a year to research and write the book, and the research took a majority of the time. In addition to long hours in the downtown library, I visited archives at UAB and Samford, interviewed an old-school sign painter, and spent many a day walking around town to study the ads in person. Staring at brick walls is often the only way to discover traces of older ads layered under the current signs.

Q. Do you have one or two signs that are your personal favorites, whether it’s because of their design or backstory?

A. One of my longtime favorites is the McCain Uniforms/“Uniform House of Dixie” sign at the corner of Third Avenue North and 22nd Street. The illustration of the smiling man and the list of professions requiring uniforms are a fun flashback to an era of sharply dressed milkmen and hotel clerks. As I worked on the book, however, I gained a new favorite: the Wiseola ad hiding inside Dog Days of Birmingham on 18th Street North. The sign, originally painted on the exterior wall of a neighboring building, promotes a soft drink made in Birmingham in the early 1900s. It’s a large, beautiful sign, with an illustration of an owl that the building’s current owners rediscovered accidentally during renovations.

Q. Why do you call the signs ghost ads?

A. The term “ghost sign” generally refers to painted ads promoting companies or products that have disappeared over time — in other words, the sign is the ghost of the long-dead advertiser. But the term also relates to the faded, transparent appearance of the painted signs.

Q. Why was it important to you to highlight these advertising art works and their place in the city?

A. The fading ads offer an unusual window into the everyday lives of the people who built Birmingham over the decades. For example, they tell us where people bought buggies in the 1880s, where they shopped for clothes in the early 1900s, what they did for entertainment, and even what brands of household cleaners and chewing gums were popular. Many of the ads are one-of-a-kind creations, promoting products, services or companies that existed only in Birmingham. They’re visual archaeology.

Also, despite the fact that the ads have endured for decades, most will fade away completely at some point, or else disappear when walls are repainted or buildings are demolished. The book helps to preserve the signs and their stories — on paper, at least.

Q. Where can your book be purchased?