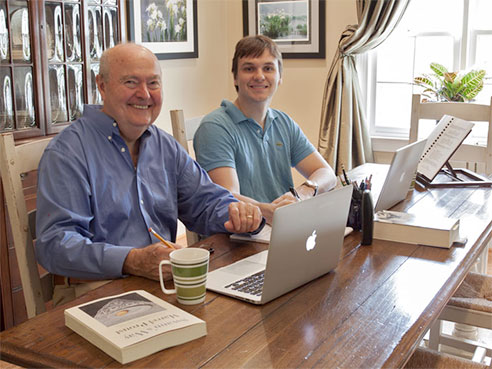 William Carter, left, and Nicolas DrogoulAnatole France, the poet and novelist, once complained that “life is too short, and Proust is too long.”

UAB professor emeritus and renowned Marcel Proust scholar William Carter, Ph.D., clearly doesn’t agree. A generation of UAB undergraduates learned French — and the subtle delights of Proust’s novel “In Search of Lost Time” — in Carter’s classes in the UAB College of Arts and Sciences Department of Foreign Languages and Literatures. His many books and articles, along with an award-winning PBS documentary, have shared the Proust story with an even wider audience. But now Carter is gaining a newfound appreciation for just how many words Proust’s epic novel contains.

For the past several years, with several more to go, Carter has been updating and annotating C.K. Scott Moncrieff’s renowned translation of “In Search of Lost Time” for Yale University Press. “I’m going word by word,” comparing the original French text with Scott Moncrieff’s English translation, Carter said. That involves modernizing language, revising questionable word choices, explaining Proust’s innumerable allusions and more. Carter’s new edition of “Swann’s Way,” the first of seven volumes that comprise “In Search of Lost Time,” was published in late 2013. This month, the second volume, “In the Shadow of Young Girls in Flower,” reached stores.

“Young Girls” includes the first appearance by Albertine, the narrator’s love interest throughout the rest of the novel, plus an extended beach interlude at the Grand Hôtel in Balbec. Carter’s manuscript for the third volume, “The Guermantes Way,” is due in December, “and I will make that deadline,” he said with conviction. Although he has four more volumes to go — the plan is for one a year — “Guermantes” marks the halfway point in terms of word count, Carter says.

Carter says he has found himself making more revisions than he expected when he began the project. “Scott Moncrieff was human after all, and no one makes the best choices at every possible moment,” said Carter. There are words that need to be more precise — for instance, Scott Moncrieff translates “lévrier,” a fashionable type of greyhound, simply as “dog.” “That could be a mutt from the pound,”Carter said. He opted instead for the more exact word.

Then there are Scott Moncrieff’s “British idioms that even the British don’t use anymore,” such as “motorcar” instead of “automobile,” which is the same word in French and American English, Carter said. “Often, the American English matches the original French better.”

Scott Moncrieff’s translation “has never been adequately annotated,” Carter explained. Proust packed his novel with references and allusions to “historical figures, literary figures, artists, scientists” and more. Sorting them all out sometimes exhausts even Carter’s extensive reference collection. That’s when he heads for UAB’s Sterne Library, to consult works such as the 12-volume “Memoirs” of Saint-Simon in search of a date or biographical detail. (Through the efforts of Carter and others, UAB is now home to the world’s third-largest collection of scholarly books, letters, papers and more related to Proust, after the national library of France and the University of Illinois.)

“I’m also doing some thematic annotation, because sometimes there may just be a word or phrase that is going to resonate later throughout the novel, and on first reading it would be very easy to miss it,” Carter said.

Proust is so packed with allusions and references that there is always the danger of “over-annotating,” Carter said. “You want to have a good balance, to give the reader interesting and pertinent and necessary information, but resist the temptation to let your notes eat up the text. So far I think we’ve succeeded.” 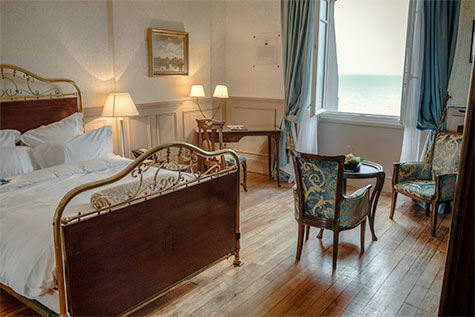 Marcel Proust’s room at the Grand Hôtel in Cabourg, the seaside resort that inspired much of “Young Girls in Flower.” Photo by Nicolas Drogoul.It takes a village

Carter is quick to point out that this literary trek is a team effort. At his side each step of the way is Nicolas Drogoul, a 2014 UAB graduate who took several classes with Carter and is his research assistant for the project. Drogoul does his own line-by-line reading of the French and English texts. “It’s really rewarding intellectually,” he said. “If I find an inconsistency I bring it up with Bill, and then I also check what Bill has done.” Added Carter: “He’s getting a Proust seminar like no one’s ever had on the planet.” Drogoul also maintains a website that he and Carter developed, www.proust-ink.com. It includes a subscription-based series of multimedia lectures by Carter, as well as Drogoul’s lush photographs of locations from the novel.

In addition to Drogoul, Carter’s team includes his wife Lynn, a former magazine editor, and a group of experts on Proust, French or both. Carter consults this brain trust on knotty language or textual issues, whether by email or on his frequent trips to France as a sought-after conference speaker.

But there are also times when translation is unnecessary, Carter adds. “There are many French words and expressions that have become common in English, and I don’t know if Scott Moncrieff chose not to use them, or they weren’t that current then,” Carter said. For example, Scott Moncrieff translates “chic,” the word “for elegant or fashionably attired,” as “smart,” Carter explained. “But of course in English you could read that as ‘intelligent’ in addition to ‘well-dressed.’ So when appropriate I’m putting ‘chic’ back in.

“They’re not errors; it’s that I’m making different choices,” said Carter. “I’m trying to make it as French as possible.”

But mostly, Carter says, he is gaining a new appreciation for Scott Moncrieff’s achievement. “I just keep saying, ‘Wow, how did he do that?’” Carter said. “It’s brilliant. Of all the translators of Proust into English, he respects the rhythm of the French. There is an affinity between the two. He was a poet and was so taken with the novel that he started translating it even before he got permission or even had a publisher.”

People tend to get carried away by Proust, Carter says. One night he got a call from a photographer whom he had inspired to pick up “In Search of Lost Time.” “He said, ‘I just wanted to call and thank you. I’ve been reading Proust and it’s changed my life!’ And this is a common occurrence.”

That’s because Proust’s language, in French or English, is timeless, Carter says. “He’s like Shakespeare and Jane Austen and all the other greats. You read those sentences and it takes your breath away. It still takes my breath away. And I’ve got lots of company.”