For many students, enrolling at a community college is the best option for their education. They may need to ease into college at a smaller school or want to earn an associate degree before attending a four-year institution.

Regardless of the reason, transfer students comprised 17 percent of UAB’s student population this past fall. More than half of those transfers were from two-year institutions, and more than a quarter enrolled in the Collat School of Business. 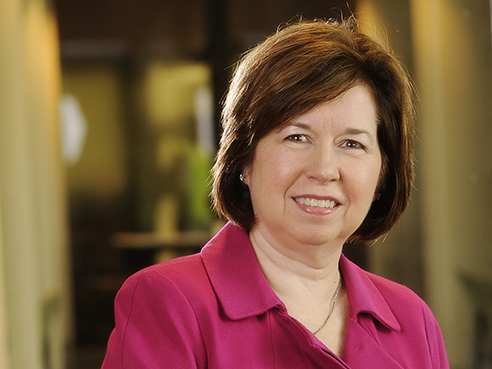 Karen Kennedy, senior associate dean, Collat School of Business
As the senior associate dean, Kennedy is ensuring transfer students — who comprise about 60 percent of Collat’s total student population — have a smooth transition into UAB, and she is extending those best practices to campuses across the state.

Continuing a legacy
Kennedy is completing her one-year term as president of the Alabama Association for Higher Education in Business, which helped create the Statewide Transfer and Articulation Reporting System (STARS) in 1994 that allows credits to be transferred among all the state’s institutions of higher learning.

With Kennedy at the helm, the organization has been deliberating how to simplify the transfer process even further. At UAB, she said part of that means focusing on expanding the existing partnerships with Collat’s primary feeder schools: Jefferson State, Wallace State-Hanceville, Lawson State, Bevill State and Gadsden State community colleges. Other four-year schools in Alabama, she said, also should collaborate more with their local two-year institutions.

“If we can facilitate a movement from the two-year institutions to four-year, that is positive,” Kennedy said.

A portion of that movement is agreeing on a reverse-transfer process, Kennedy said. According to Inside Higher Ed, roughly half of transfer students who earn a bachelor’s degree fail to receive the associate degree they earned while in community college. Under Kennedy’s leadership, AAHEB has formed a reverse-transfer agreement between most of the state’s four-year universities and their community college partners.

“We wanted to be more supportive of the relationship between the two- and four-year schools, and I’ve been pleased to be a part of that,” Kennedy said.

She said AAHEB also is focused on identifying ways two- and four-year schools can partner in defining core curriculums. If a student transfers after getting an associate’s degree, but the schools’ curriculums don’t match, Kennedy said that student may have to enroll in lower-level classes before beginning their new academic career in a chosen field of study.

“If students are coming to Collat [from a two-year college] having completed core business classes, we could put them in the upper-level courses, but have they learned the same content?” Kennedy asked. “Schools should discuss teaching approaches and share best practices.”

Sustaining partnerships
Kennedy said AAHEB encourages leadership for two- and four-year schools to remember they all are serving the state’s constituents, regardless of which one students initially choose to attend. She hoped UAB would be a leader in the drive to strengthen partnerships with feeder schools and said it has lived up to that expectation.

“A common discussion point [between schools] is, ‘Are the students prepared to succeed?’” she said. “You can be passive, but the approach that Collat and UAB have is to be more active, to invite the two-year schools to campus and talk about curriculum and how to help students do better. We don’t want to be in a vacuum.”

One way AAHEB wants to keep the schools connected is via faculty. If faculty in four-year institutions reach out to and work with faculty in community colleges, Kennedy said there is a higher chance that students will transition easily between schools.

“Kudos to the accounting faculty at UAB for reaching out to their feeder schools to make sure that transfers move smoothly,” she said. “Other programs in Collat are working on similar partnerships.”

Overall, she said, the goal is for each of Alabama’s two- and four-year schools to reach agreements that simplify the process — from enrollment to graduation — regardless of where they start or finish.

“Students benefit by having a streamlined path from a community college to a four-year institution,” Kennedy said. “They miss no time, and they can move right through. When a student can come here and waste no credits, that saves time and money.”