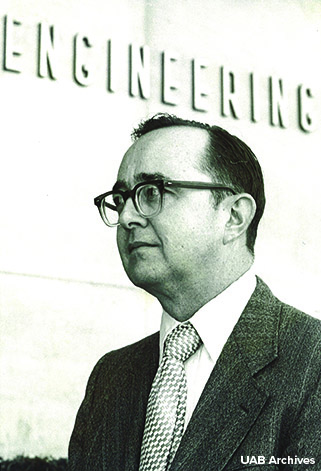 Appleton was born in Albertville, Alabama, in 1927. He earned a bachelor’s degree in civil engineering from Auburn University in 1947 and master’s and doctorate degrees from the University of Illinois. He served on the faculty both there and at North Carolina State University before moving to Birmingham in the early 1960s to direct the fledgling engineering program at the University of Alabama’s extension center in Birmingham, and he remained here after UAB was established in 1969.

When he was named as director of the undergraduate engineering program in 1963, Appleton arranged for classes to be held in conference rooms and laboratories all over Birmingham until an engineering building could be built that same year on what is now known as University Boulevard. That original building is now UAB’s Cudworth Building.

When he retired from the deanship in 1978, he stayed on faculty, during which he hired Fouad Fouad, Ph.D., current chair of the Department of Civil, Construction and Environmental Engineering in 1981.

"He was very generous with his time,” Fouad said. “When we traveled together to professional society meetings, he would introduce me to national leaders in different engineering fields, which had a tremendous impact on my career.

“For years after that, whenever I mentioned I was from UAB, people would respond, 'Oh, Joe Appleton's school.' People around the country knew that he had started this program almost single-handedly, and those of us who came later were respected because we worked with Joe Appleton."

‘A gracious and honorable person’

He was president of the Exchange Club of Birmingham from 1981-82 and Exchangite of the Year in 1991. He was preceded in death by his wife, Patricia Ann Zimmerman, and is survived by six children and several grandchildren and great-grandchildren.

"He and Pat were very kind to me and my wife, Mona,” Fouad said. “They encouraged us in every way. I felt like he was a parent who wanted to give me every opportunity to succeed. He was truly a gracious and honorable person."

Read more about Appleton in the School of Engineering’s obituary.