“The gender gap in STEM [Science, Technology, Engineering and Math fields] is a worldwide phenomenon,” said Virginia Sisiopiku, Ph.D., associate professor in the UAB School of Engineering and director of the school’s transportation engineering program. And that hurts everyone, because “if women are not adequately represented in engineering and science fields, then society misses the creativity, innovation and contributions that gender can bring.” Many of the proposed solutions for engineering’s gender gap are similarly large in scope — more on that below — but part of the answer, Sisiopiku said, comes down to a matter of one-on-one: giving girls role models in the field so they can see “that it is possible for them, too, to become successful engineers.”

Throughout its history, the School of Engineering has attracted female innovators who have inspired others to follow in their footsteps. In February 2019, the Chronicle of Higher Education produced a report on the colleges leading the way in enrolling and graduating women in engineering fields. The School of Engineering ranked number 27 among all U.S. four-year public institutions (the highest in Alabama) with 23.8 percent of its bachelor’s degrees going to women. The national average in 2015, by comparison, was 18.5 percent, essentially unchanged since 2000. Meanwhile, about 27 percent of UAB School of Engineering undergraduates in 2019 are female, “and they are strongly represented among the student leadership across all of our departments,” said Dean Iwan Alexander. “Whether you look at our Engineering Ambassadors, student professional organizations or annual scholarship and award winners, female students are consistently high profile and successful. I think the example those students set is perhaps a factor contributing to higher percentages of female students enrolling in UAB engineering than many of our peers.”

Meet five students, alumni and faculty who are giving today’s future engineers a glimpse of what the field has to offer. 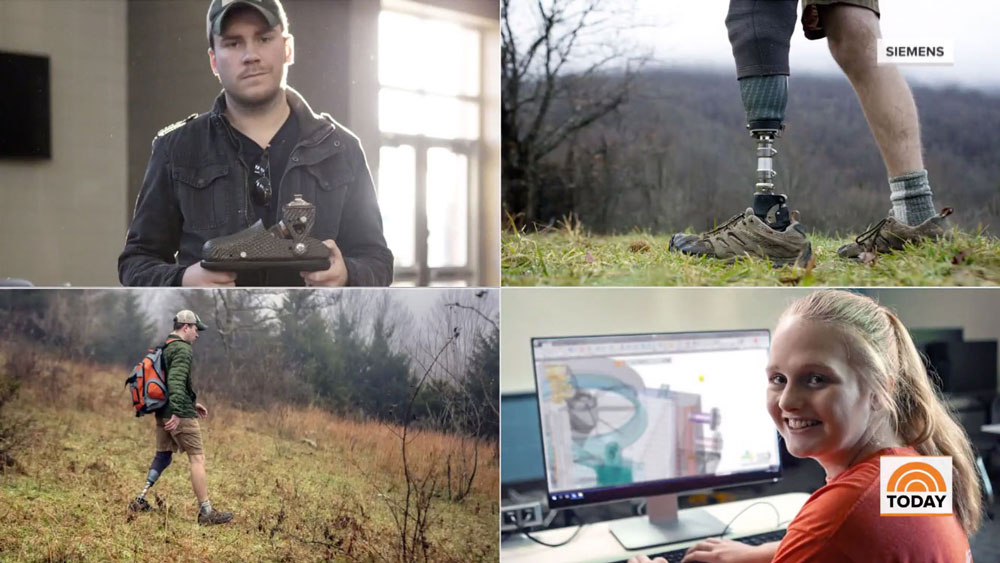 Ashley Kimbel (bottom right) designed a lightweight prosthetic foot for Marine Corps veteran Kendall Bane. In an appearance on the "TODAY" show, Kimbel announced she was coming to UAB to study biomedical engineering.

Where are you going to school next year? Ashley Kimbel is probably one of the few high school seniors in America not playing football or basketball to answer this question on live, national television. In late February, Kimbel appeared on NBC’s “TODAY” show to talk about the lightweight prosthetic foot she had designed for Marine Corps veteran amputee Kendall Bane. Then, in answer to a question from anchor Craig Melvin, the Huntsville native announced that she would be attending UAB (watch the full segment here). The biomedical engineering program, a joint department in the School of Medicine and School of Engineering, drew her to Birmingham, Kimbel later told UAB News, along with “the major emphasis placed on undergraduate research.” Her career goal is “to be a surgeon one day and use my biomedical engineering and medical training to be on the forefront of medicine and doing more projects to help people like Kendall,” Kimbel said. 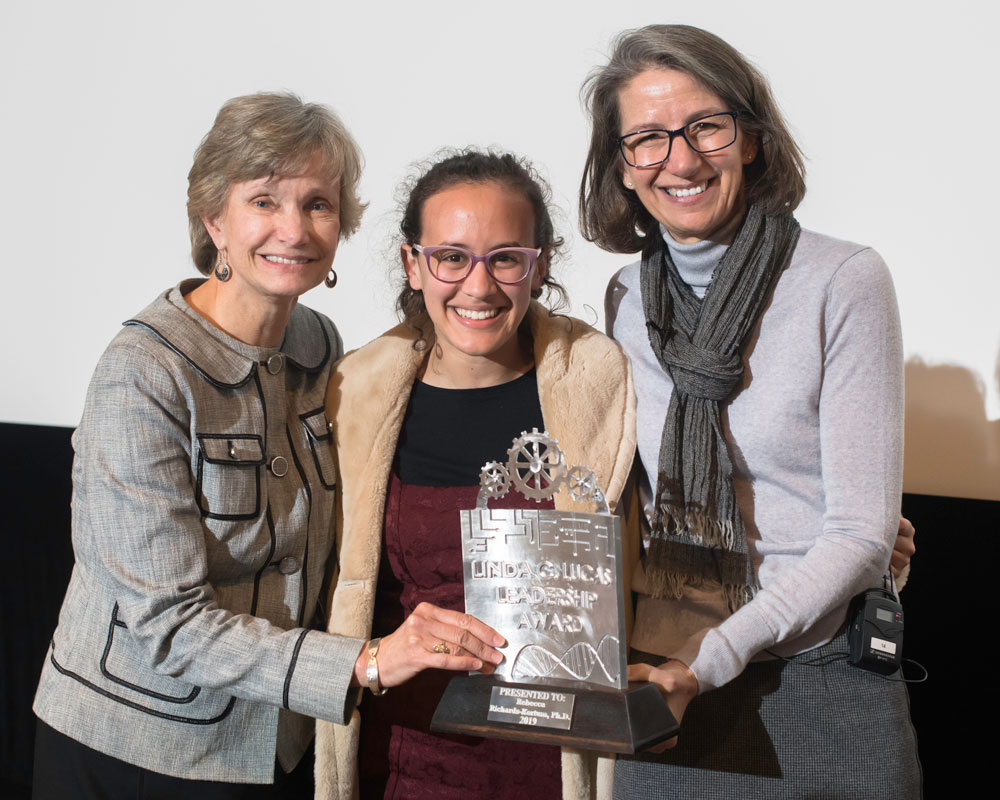 A week after Kimbel’s “TODAY” announcement, UAB hosted the first Linda C. Lucas Leadership Award Lecture, honoring the woman who received the first doctorate in biomedical engineering awarded by the School of Engineering. Lucas, who holds five other graduate degrees from UAB, later became the first woman chair of the Department of Biomedical Engineering, the first woman dean of Engineering (one of the few women engineering deans in the United States at the time) and finished her career as UAB’s provost. Lucas also was the first woman president of the American Institute for Medical and Biological Engineering and president of the Biomedical Engineering Society and the Society for Biomaterials. The inaugural Lucas Leadership Award recipient, Rebecca Richards-Kortum, Ph.D., of Rice University, discussed “How Bioengineers Can Reduce Health Inequities in the US and Globally” in her lecture. The goal of the honor, said Paulette Patterson Dilworth, Ph.D., vice president for Diversity, Equity and Inclusion at UAB, was to “shine a light on the next generation of women aspiring to be leaders in their respective fields.” 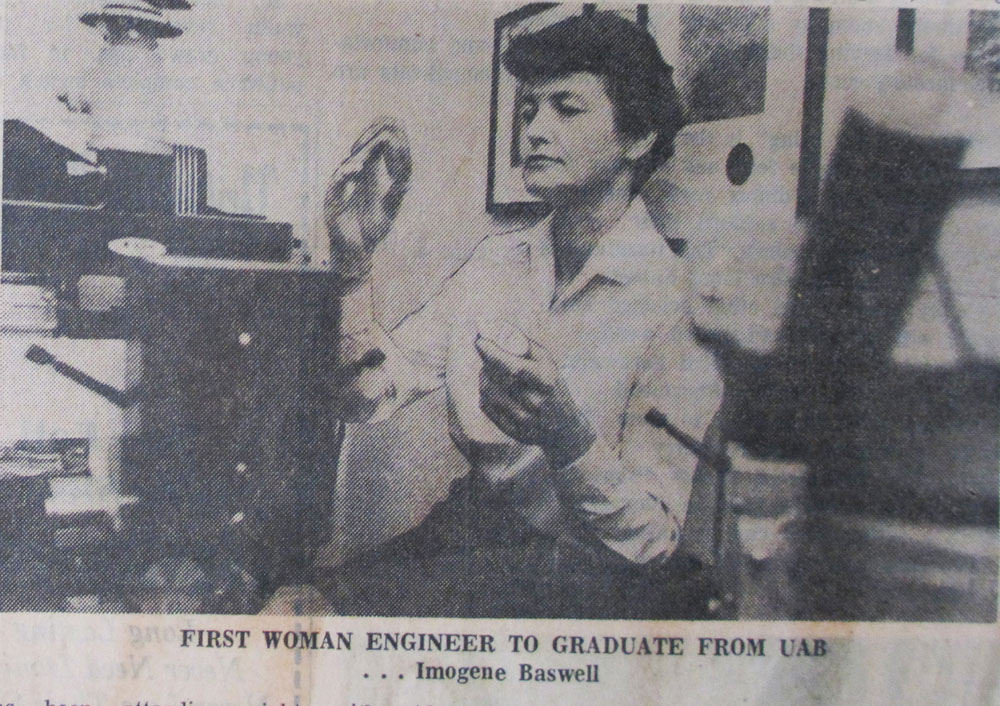 Fifty years ago, in UAB’s first year as an independent university, the School of Engineering graduated its first female student, Imogene Baswell. Baswell, who was one of only 330 female graduates of U.S. engineering schools in 1969, was a lifelong trailblazer. She was one of Birmingham’s first female police officers in the 1960s, studying engineering at nights for eight years to earn her degree. She added a master’s at UAB in 1976 and later earned her doctorate at Clemson University. During the course of her career at Richards Medical Company Baswell acquired three patents related to medical implants. Although Baswell died in 1997, she continues to inspire women engineers. In 2017, UAB engineering alumnae founded the Imogene Baswell Society to honor Baswell and fund scholarships to support female engineering students at UAB.

“I loved the idea of honoring a pioneer in this field, and I am really excited that we can use her legacy to promote women in today’s world and encourage them to pursue engineering careers,” said alumna Jeanne Otts, a retired senior engineer from Southern Company, who also volunteers with the UAB chapter of Society of Women Engineers, when the scholarship was announced. “So many women work while they’re in school, so I hope this scholarship will help give some of them more freedom to pursue academic goals and to excel in their college experience.” 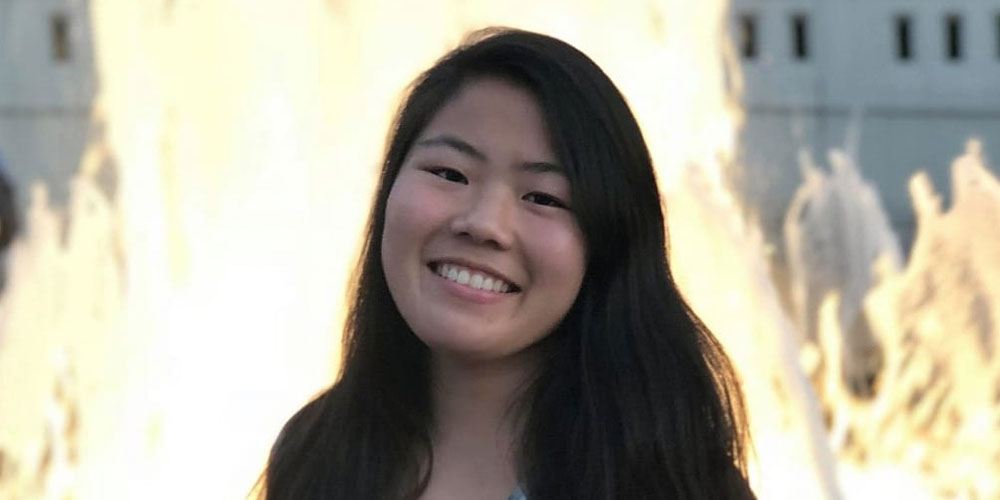 Zoë Penko was one of a handful of students nationwide to be selected for the Rising Star award by the Society of Women Engineers in 2019.

One of the top reasons Penko chose UAB, in addition to the vibrancy of Birmingham and the employment prospects due to the university’s connection with local industries, was UAB’s commitment to diversity, “which is especially important for a young, female minority,” she said. During her time at UAB, Penko became active in the Society of Women Engineers, which “has afforded me so many opportunities I can’t get in the classroom — support from other women in STEM, leadership roles, volunteering and a high-impact mission,” she said.

The lack of role models is one significant barrier to bringing women into STEM fields, Penko noted. “It’s difficult to get interested in STEM when you feel excluded and typically what someone sees is what shapes their vision of how an engineer ‘looks,’” she said. As president of the student section of the Society of Women Engineers at UAB, Penko is heavily involved in the group’s Kids in Engineering Day events, which are aimed at students in the fourth through sixth grades. “I do get a lot of ’this is hard!’ [reactions] from the participants, to which I respond with, ‘yes, but it’s also fun, isn’t it?’” Penko said. “When a problem is difficult it isn’t a bad thing, but a learning opportunity.” 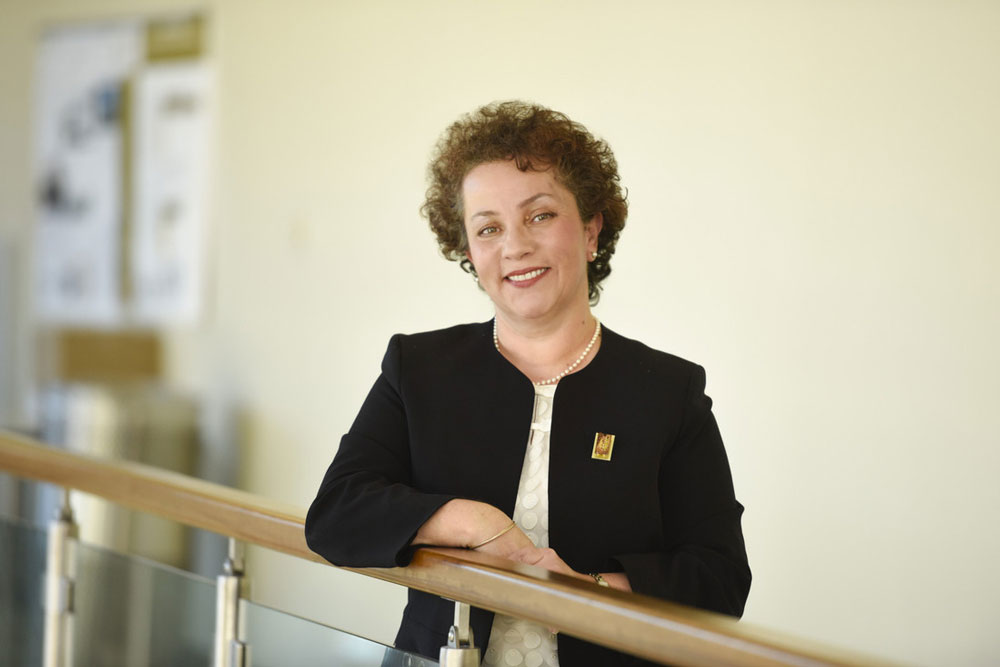 Transportation engineer Virginia Sisiopiku loves to find "practical solutions to societal problems," on the roadways and in academia, where women are underrepresented. The associate professor has worked with the UAB Girls in Science and Engineering Day events since 2015 to provide female role models and engage young girls in engineering and STEM careers.

For Virginia Sisiopiku, the appeal of engineering was a “desire to provide practical solutions to societal problems,” she said. Sisiopiku studies traffic congestion patterns and devises new ways to alleviate congestion using computer simulation models and data analytics. She is the director of the TREND Lab, which focuses on developing innovative solutions to transportation challenges. In 2014, Sisiopiku became the first woman in Alabama to be named a fellow of the Institute of Transportation Engineers, and in 2018 she became the first member of UAB’s faculty to receive the Educator of the Year award from the Engineering Council of Birmingham.

“I never considered gender as having anything to do with one’s ability to be successful in engineering,” Sisiopiku said. “On the contrary, I always thought that women can become excellent engineers as they often carry personality traits associated with professional success,” including being smart and driven to succeed, enjoying finding common-sense solutions and fixing problems, and being detail-oriented, productive, dependable and effective multi-taskers. In Sisiopiku’s native Greece, roughly half of her civil engineering classmates were women. But women were “significantly underrepresented” in the other engineering disciplines. Lingering stereotypes and biases are part of the problem, Sisiopiku said. “Young girls, influenced by longstanding gender stereotypes, often self-select out of science and engineering courses and shy away from considering engineering as a career choice,” she explained. “Many lack female role models in STEM or believe that their chances of achieving their full potential as engineers may be hindered by gender bias in a male-dominated field.”

Since 2015, Sisiopiku has served as event director for UAB’s Girls in Science and Engineering Day, which lets middle-school girls participate in science and engineering workshops that are led by women faculty, staff and students. “They see that it is possible for them, too, to become successful engineers and scientists,” Sisiopiku said. “Many of them come from under-served areas and don’t have anyone in their immediate environment who is a woman and an engineer,” Sisiopiku told the Reporter last year. “I want to instill in them the idea that it’s a career where they have a good potential for success.”

“Pointing more girls toward careers in engineering and STEM will help boost the ranks of female engineers,” Sisiopiku says, but it’s only one part of the road to a more equitable profession. “It is equally important for employers to provide friendly and supporting work environments for women engineers in order to retain them in the workforce and ensure that they achieve their full potential and thrive as engineering professionals,” she said. “Policies and programs should also be in place that ensure equity, fairness and support for all. Such obligations are the only way to break the current cycle of gender disparity in the engineering workforce and, ultimately, best serve the needs of the profession and society at large.”