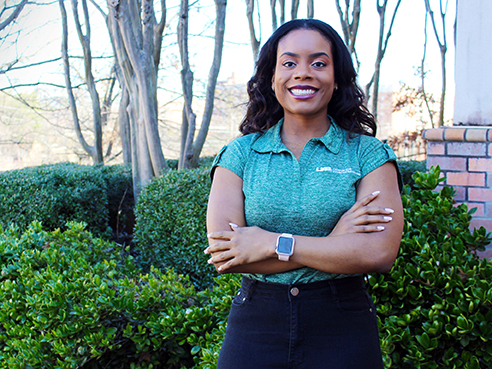 Grace CunninghamFor her first 19 years, Grace Cunningham, in her own words, took her life for granted. She ate whatever she wanted — greasy cheeseburgers, fluffy omelets — and was an accomplished athlete. She played basketball and threw javelin for Alabama’s John Carroll Catholic High School, and played rugby during her freshman year of college.

But unexplainable things started happening to her body during her junior year. Excruciating pain prevented her from getting out of bed. Her hands would stiffen and freeze, “as if I jammed all my fingers at once,” she said. Her primary care physician diagnosed her with arthritis, but the problems continued.

“Before lupus, I was an athlete who didn’t care about what I ate or how long I stayed in the sun — you know, like any other young adult,” Cunningham said. “I took my life for granted without realizing it could all change in the blink of an eye.”

After her 2015 graduation with a bachelor’s in kinesiology from the University of Alabama in Tuscaloosa, Cunningham decided to attend UAB’s School of Education to earn her master’s in exercise physiology. She will join more than 2,100 students during this Friday’s and Saturday’s spring commencement ceremonies. Her studies at UAB have informed her research and given her the opportunity to investigate alternative ways to fight lupus symptoms and achieve the possibility of remission.

Those three months without an official diagnosis were hard on Cunningham, she says. She missed days of classes for her kinesiology major — an irony she recognizes and appreciates — because getting out of bed was too painful, and even when she did make it, the agonizing pain she felt would last the entire day. She gained weight, and her swollen feet kept her favorite shoes from fitting.

“My confidence was depleted,” the Pleasant Grove, Alabama, native continued. “I felt alone and scared about the future that was about to take place.”

She opened up to one of her instructors about her situation and learned to search academic journals for information on the role of exercise and proper nutrition in managing her lupus and how to examine her prescribed medication to determine if any could be affecting her quality of life. Cunningham began seeing a rheumatologist who advocated for progressive and alternative treatments, adjusted her prescriptions and began exercising and eating more intentionally; she eats gluten, dairy and eggs minimally, due to their inflammatory properties. 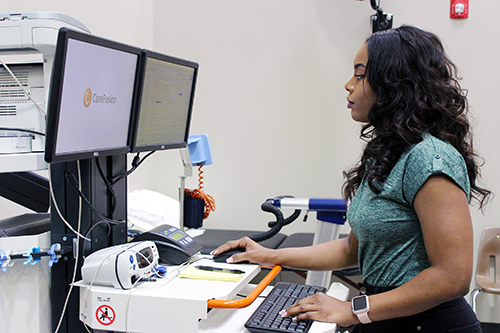 Cunningham will join more than 2,100 students during this Friday’s and Saturday’s spring commencement ceremonies.Cunningham says she also relied on her friends as a special kind of support. Many witnessed her journey with lupus from the outset, and although some acquaintances were less than encouraging, she remains grateful for those who stuck by her.

“I had people who turned away from me once I was diagnosed, with all types of excuses as to why they left me behind,” she said. “That’s why I’m grateful to have family and friends who stuck by my side — because it really helped encourage me to be where I am today.”

Cunningham says UAB’s exercise physiology master’s program was perfect for her goals. With the help of Eric Plaisance, associate professor in and chair of the Department of Human Studies, director of the exercise physiology graduate program and a scientist in the Nutrition Obesity Research Center, Cunningham says she began pursuing research interests she may not have taken on alone.

“As a researcher, I can see first-hand the benefits that exercise prescription can have on individuals from various backgrounds with various ailments,” she said. “I can run tests and clinically train various participants, which has enhanced my knowledge and love for my occupation.”

She says she plans to continue conducting research on how beneficial exercise prescription can be for patients with autoimmune diseases, especially lupus.

“I want to use that research to encourage others to change their exercise and nutrition regimens in order to fight SLE and similar diseases so they can increase their quality of life,” Cunningham said. “I would love to get my doctorate after working with the Center for Exercise Medicine for a few years.”