Aiming for a cure against the odds, Costa earns standing ovation 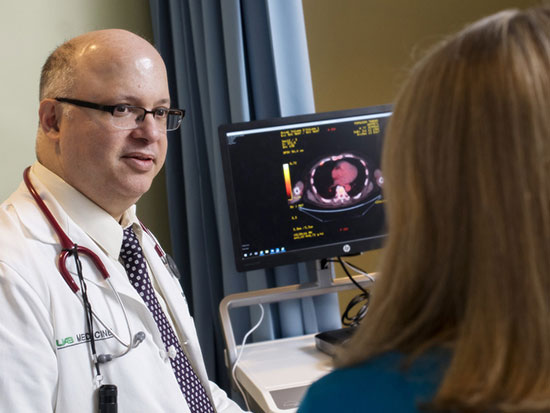 Since Luciano Costa, M.D., Ph.D., arrived at UAB in 2014, enrollment in clinical trials for patients with multiple myeloma has increased exponentially, including among African American men, who are hardest hit by this aggressive blood cancer. He is now director of the O'Neal Comprehensive Cancer Center's Clinical Trials Office. "When a patient sees your enthusiasm," Costa said, "that has more impact than anything."Academic conferences tend to be serious affairs. Practitioners, especially those in combat with a foe as wily as cancer, do not get too excited because they have seen enough promising ideas falter. But there was something different about this presentation, this trial, thought Luciano Costa, M.D., Ph.D., a scientist at the O’Neal Comprehensive Cancer Center at UAB and associate professor in the Division of Hematology and Oncology.

Costa and his wife, Ana Xavier, M.D., Ph.D., a pediatric hematologist and oncologist at UAB, always attend the annual meetings of the American Society of Hematology together, but they have different clinical and research interests and attend their own sessions. Still, this past December in San Diego, “I told my wife, ‘Come to my presentation today — I’m presenting my dream trial,’” Costa said. He only had the usual 10 minutes to share preliminary results of his innovative multiple myeloma trial, MASTER, which is taking an unusually aggressive approach to wipe out a blood cancer currently considered incurable. For some patients, at least, this could mean freedom from a lifetime of continuing therapy.

The results were unprecedented — “the highest and deepest level of response ever reported on a myeloma trial,” Costa said. That earned him a warm round of applause from the clinician-scientists present. It was his last slide, though, that made the presentation unforgettable. Costa noted that 21% of participants were African American. An oncologist from Indiana, himself African American, pointed to that statistic. “He asked for another round of applause, which is very unusual,” Costa said. “I choked up. It was very touching and, whatever else I do, it will be a highlight of my career.”

A fraction of the fraction

The problem is worst for under-represented groups. A 2019 study examined several trials of highly promising immunotherapy treatments in a number of cancer types and found that black patients comprised fewer than 4% of those who participated.

“UAB has the longest established Comprehensive Cancer Center in the Deep South — we have a unique opportunity and a unique charge to promote and advance clinical trial participation among minorities,” Costa said. This is especially true for cancers such as multiple myeloma, the second most common type of blood cancer in the United States. It affects more than 25,000 people each year, with African American men diagnosed at three times the rate of other populations. The 21% figure cited at ASH was the total of African Americans enrolled at all MASTER study locations, Costa noted. (MASTER opened enrollment in 2018 at UAB, Vanderbilt University, Duke University, the Medical College of Wisconsin, University of Wisconsin and Oregon Health and Science University.) “At UAB, our number was closer to 40%,” Costa said. “It’s a great case study — if you have a coordinated effort and motivated investigators, you can do great things.”

Four years in the making

Costa spent more than four years conceptualizing the idea behind MASTER — the Monoclonal Antibody Sequential Therapy for Deep Remission in Multiple Myeloma clinical trial. It is testing a combination of immunotherapy drugs, including carfilzomib and the monoclonal antibody daratumumab, with the aim of definitively eradicating multiple myeloma in patients.

“The paradigm in multiple myeloma is that it is an incurable disease that you treat aggressively early on and then you are on maintenance therapy forever,” Costa explained. After their initial treatment, that is, patients stay on therapy for the rest of their lives to prevent the cancer from returning, but it unfortunately almost invariably does. With MASTER, “we intentionally increase the therapy up front and specify it to the patient’s own body characteristics; then if the disease becomes undetectable, which could be the early signature of a cure, we stop treatment and monitor.

“That is what patients want, after all — a treatment that gives them the possibility of eliminating any trace of the myeloma without having to be on therapy for the rest of their lives,” Costa said when the trial was announced in 2018. “It is a bold move, but bold moves are what our patients deserve.”

In the clip above, Costa shares exciting preliminary results from the MASTER trial for the Video Journal of Hematological Oncology.

How can doctors know if that bold move worked for a particular patient? The key element, Costa said, is detecting the presence of cancer cells with a very high degree of precision. Using next-generation genetic sequencing technology, physicians in the MASTER trial can detect cancer cells at a level of one in 100,000 — up to a thousand times more sensitive than the traditional methods of evaluating treatment response. Patients in the trial who have eliminated minimal residual disease discontinue therapy but are monitored for relapse at the molecular level so that the disease can be attacked as quickly as possible if it returns.

Costa’s presentation of the MASTER trial results was one of three oral presentations he made at ASH, including another report on interim results from a Phase I trial. He also led a meeting of a multiple myeloma clinical trials consortium that he created. Since Costa arrived at UAB in 2014, accrual in multiple myeloma trials has risen sharply, to 85 patients enrolled in trials in 2019 from 0 in 2013. “We really built a team approach, where we put the patient at the center and really understand the population we serve,” Costa said. “Then we really beat the bushes to try to get the right opportunities and clinical trials for those patients.”

In 2019, Costa was named to direct the O’Neal Comprehensive Cancer Center’s Clinical Trials Office, which provides infrastructure to facilitate the more than 200 clinical trials ongoing across the Cancer Center. His goal, Costa said, is to extend the same approach that has worked in multiple myeloma across many different cancer types. That includes working groups that allow experienced investigators to mentor physicians early in their careers and help them navigate the barriers to successful trials. It also includes a focus on “creating our own concepts” for trials, fostering innovative ideas from faculty.

“Our patients come to us with so much hope,” Costa said. “There are many interfaces to cancer research, but clinical trials are the most tangible to the people we serve. That’s really where cancer patients get first-hand interaction with the research being done here at UAB. There is plenty of data, as well as my own personal experience, that the most important factor for a successful clinical trial accrual is the motivation of the investigator.” Costa, who states on his Twitter account, @End_myeloma, “I unapologetically believe MM can be CURED,” wears his motivation proudly. “When a patient sees your enthusiasm for a new drug or approach and its possibilities, that has more impact than anything.”