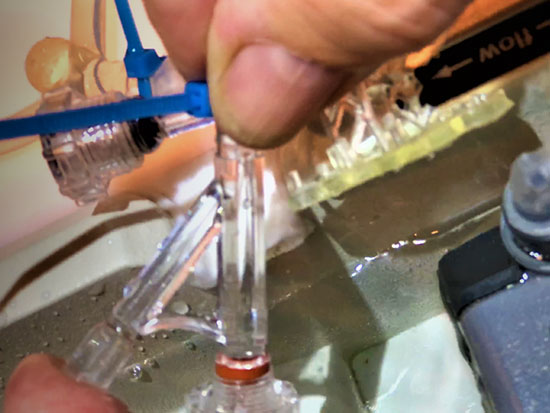 The coil wire designed by Jesse Jones, M.D., is directed to its target through the natural flow of blood. In the prototype shown above, occluding one outlet causes the coil to flip into the channel that water is flowing through. Image courtesy Jesse Jones, M.D.This summer, UAB’s Harbert Institute for Innovation and Entrepreneurship awarded more than $300,000 to faculty and staff with ideas for new products and processes that needed proof-of-concept or early-stage product development support to reach their commercialization potential. Eleven projects received funding of $10,000 to $50,000, made possible by the Regional Innovation Strategies program from the U.S. Economic Development Administration.

What are these projects, and who are the inventors behind them? The Reporter spoke with several grant recipients to learn more about their ideas and their advice to colleagues considering commercialization opportunities of their own.

This week’s project is Coil Wire Technology for Intravascular Navigation, led by Jesse Jones, M.D., assistant professor in the departments of Neurosurgery and Radiology.

Navigating through the vascular system to reach the therapeutic target is a major component of endovascular procedures, a type of minimally invasive operation that accounts for more than a million physician visits in the United States each year, Jones said. Endovascular procedures use catheters and wires to traverse the arteries and veins in order to perform diagnostic angiography and therapeutic inventions such as angioplasty and vascular stenting.

Although all patients share the same basic anatomy, some have a number of tortuous, or twisted, arteries and veins that make it difficult to reach an area of blockage or other clinically relevant feature. This is a major source of complications and increased operating time during endovascular procedures. 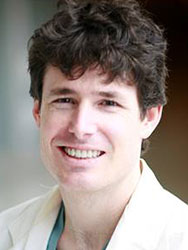 Jesse Jones, M.D.Jones is developing a new type of device, a flow-directed coil wire, to navigate tortuous blood vessels more efficiently and reach locations that would be impossible to access with existing technology. It relies on the insight that twisted vessels are the product of rapid or turbulent blood flow. So it is designed to move with that flow in order to pass through the tortuous vessel and reach its target.

The Regional Innovation Strategies grant funding will support further design of prototypes made in collaboration with local fabrication shops, Jones said. These prototypes will be tested in a 3D-printed elastic model of patients’ own tortuous vasculature.

Where did your idea come from?

“I was struggling during a procedure and about to give up [trying to navigate a tortuous vessel] when I thought, ‘Maybe I’ll put a coil in there and see if it goes where I want.’ It worked and I thought, ‘That was an interesting way to navigate, using a coil.’ Coils aren’t designed for that — they are thin pieces of metal shaped in a sphere that are deployed out of a catheter to close off arteries or aneurysms. But when you first put a coil out, it just floats or jiggles in the blood flow like a sail flapping in the breeze. I realized there could be some improvements, but we could use that method of propulsion on the end of a wire to make a flow-directed wire.”

What problem does it solve?

“As a physician I confront this problem of vessel tortuosity on a daily basis. Typically when we are navigating, we use what is called a guide wire — a long, thin piece of metal with a tip on the end that can be shaped in various ways depending on the shape of the vessel you are trying to get into. This flow-directed coil wire technology has the potential to allow us to navigate vessels that we could not navigate with existing guide wires.”

“Not that I’m aware of. Maybe someone has tried it like we did, out of frustration. A coil is meant to stay in the body so it has a soft, flexible ‘detachment zone’ where it is designed to break off and is not supportive enough to allow you to advance a catheter over the coil. Part of developing this idea is to make a transition zone like a more typical guide wire.”

What factors convinced you to move forward into commercialization?

“We published the case we did with a coil in a journal, and you only have a year between when you disclose and when you can file a patent, so I was talking with the Harbert Institute and in the process of completing a provisional patent application they mentioned that this funding was available and so I pursued it.”

Is this the first time you have worked with the HIIE?

“Yes. I just came here [to UAB] a little over a year ago. I have some preliminary patents from where I was before, but nothing had advanced to this point. Now that I’ve made some connections with the folks at Harbert, we’ve been discussing additional ideas and it’s been a terrific resource.”

Do you have any advice for others in the UAB community who may have an innovative or entrepreneurial project in mind?

“I think many times in clinical practice physicians come up with ideas, but they may not think they are important enough or that anything can be done to advance those ideas, and they just end up forgotten. I would say that if you come up with an idea that has worked for you in the past, you might think about how it can be developed further. A lot of inventions that we take for granted now happen like this coil wire, where someone is struggling and comes up with something in the moment.”