How seaweeds can help predict life on a warming planet 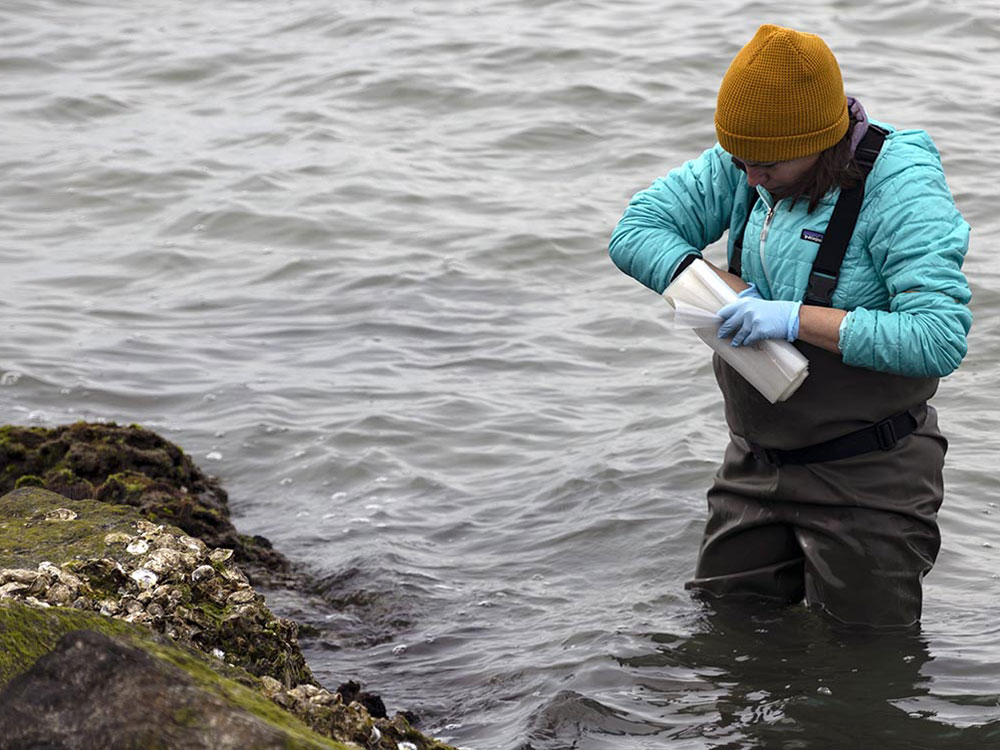 There’s a lot you don’t see when you look at seaweeds.

Those billowing wads of slightly icky algae brushing by your legs on a rough day at the beach, or the indistinguishable, ribbon-like groups stuck to rocks on a murky river bottom, are actually a mass of individuals with fascinating histories and unorthodox sex lives.

Take the red seaweed Gracilaria vermiculophylla. Its native range is the along the coastlines of China, Japan and Russia. But decades ago, most likely beginning in Matsushima Bay, some 200 miles northeast of Tokyo, Gracilaria got wrapped up in the international oyster trade. Today, you can find this seaweed in estuaries from Chusini Cove, Alaska, to Baja California on the Pacific coast of North America, from Georgia to New Hampshire, and Morocco to Scandinavia.

We know these details mainly through the field work and genetic sleuthing of UAB’s globe-trotting seaweed expert Stacy Krueger-Hadfield, Ph.D., assistant professor in the Department of Biology. As a post-doc and here at UAB, Krueger-Hadfield has tracked Gracilaria from Japan to the United States and Europe — mostly on the water, but sometimes collecting samples from museum archives. Along the way, she has documented how these successful invasions have “torn up the life cycle” of Gracilaria — and created an unparalleled opportunity. 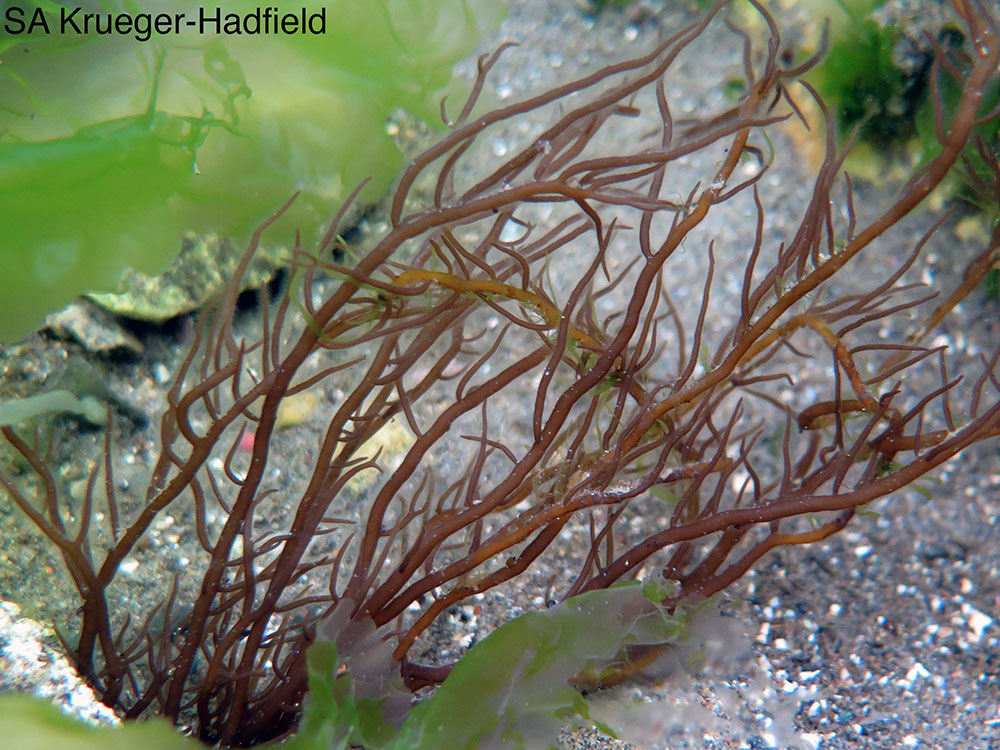 You may not think much about seaweed sex, but the National Science Foundation has. Gracilaria is what Krueger-Hadfield describes as an “ecosystem engineer,” capable of creating, modifying and maintaining habitats for crabs, snails and other creatures, with outsized effects — good, neutral and bad — on surrounding life. Our climate is changing, and the habits and choices of successful invading species such as Gracilaria offer crucial clues to the future of life on Earth.

In January, Krueger-Hadfield received a five-year, $1 million-plus NSF CAREER award that will expand her work. CAREER awards are designed for early-career faculty with the potential to be academic role models in both research and education. Krueger-Hadfield’s project will give UAB graduate and undergraduate students the opportunity to take part in her research — and contribute new knowledge about the freshwater red algae in Alabama’s rivers and streams. 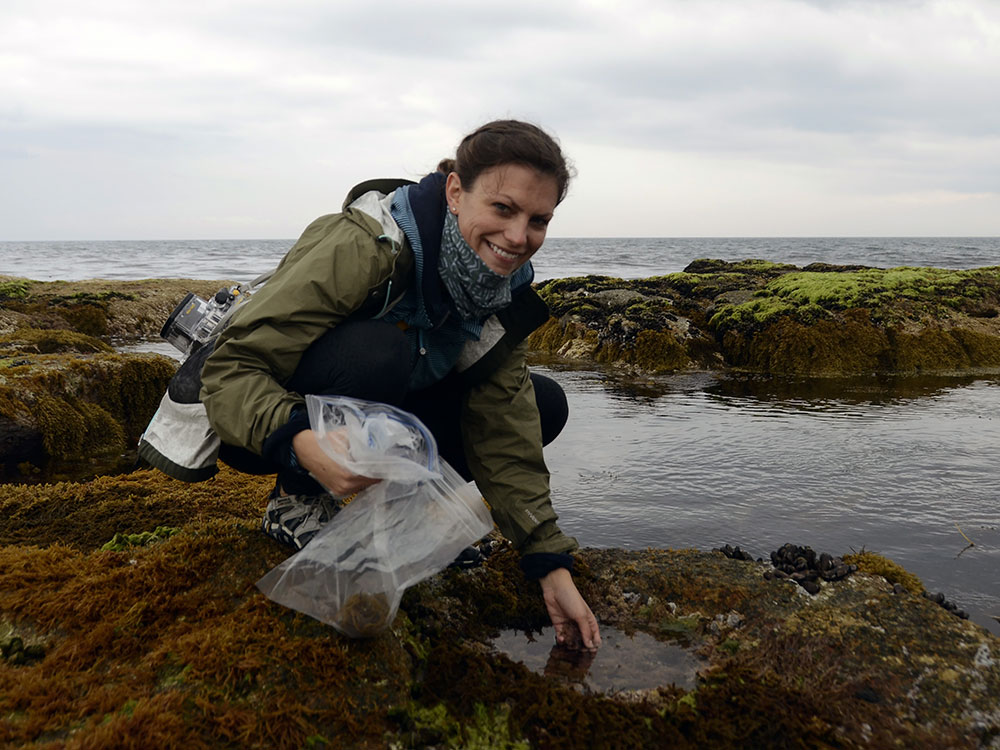 Tracking an invasion through history

Macroalgae, like humans, roses and all other eukaryotes — everything but viruses, bacteria and archaea — have a multi-stage life cycle. In one stage, their DNA is contained in one chromosome (haploid), and in another, it is in two chromosomes (diploid). For humans and other mammals, the haploid stage is short-lived and consists of eggs and sperm. Once they meet to form an embryo, the rest of the life cycle is diploid. 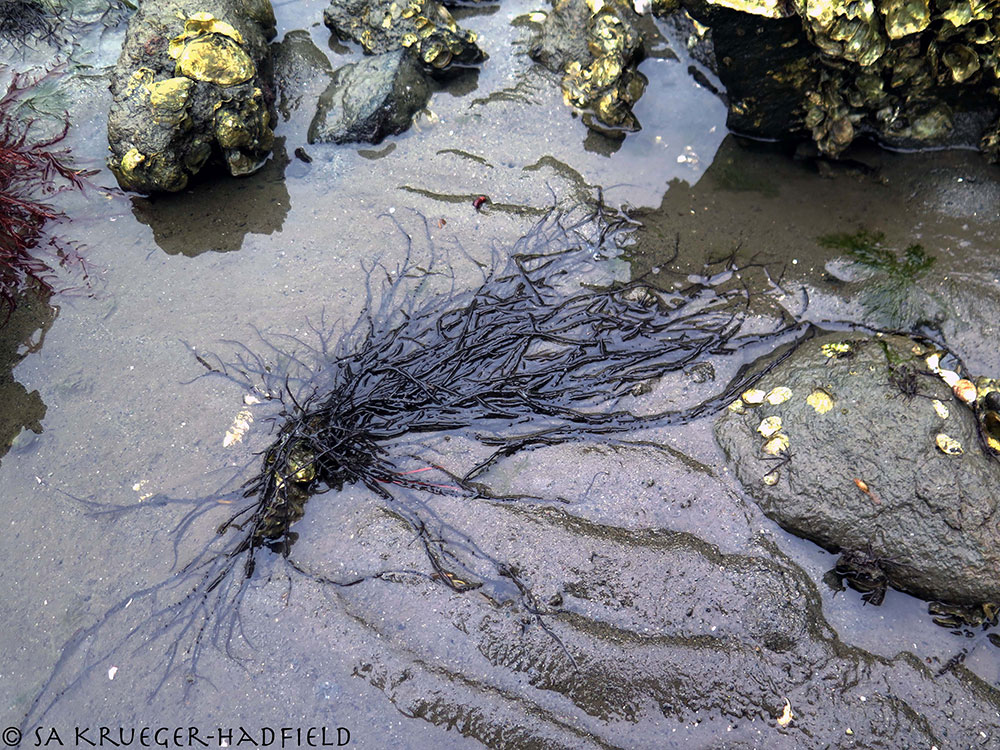 Gracilaria vermiculophylla on a mudflat in Soukanzan near Matsushima Bay in Japan – a likely source region of the invasion of the Northern Hemisphere. Image courtesy Stacy Krueger-Hadfield

Cheng-Chien Chen, Ph.D., and Wenli Bi, Ph.D., both of the Department of Physics, and Gayan Wijeratne, Ph.D., Department of Chemistry, will lead a campuswide training for junior faculty planning to apply for an NSF CAREER Award. Two sessions will be held online, on April 15 and April 22; the second session builds on the first, so attendance at both sessions is recommended. Register by April 8.

For Gracilaria, and many of the other macroalgae Krueger-Hadfield studies, the situation is more complicated: Their haploid sperm and egg equivalents live long lives and are incredibly hard to distinguish from the diploid individuals without a microscope. “It’s like a human egg and sperm grow up and become complete and complex adults before they make a sperm and an egg,” Krueger-Hadfield said.

The cycle begins when male Gracilaria individuals known as gametophytes release sperm that cannot swim and instead float off in hopes of encountering and fertilizing the eggs that stay on the female gametophytes. Success results in the female gametophyte nurturing the resulting zygote before releasing thousands of spores, each of which can grow into a separate sporophyte, neither male nor female, with a mixture of genes from both parents. After it grows into an adult, the sporophyte produces a group of four spores that develop into four separate gametophytes, two male and two female. These grab a spot on the sea floor and the cycle starts over. 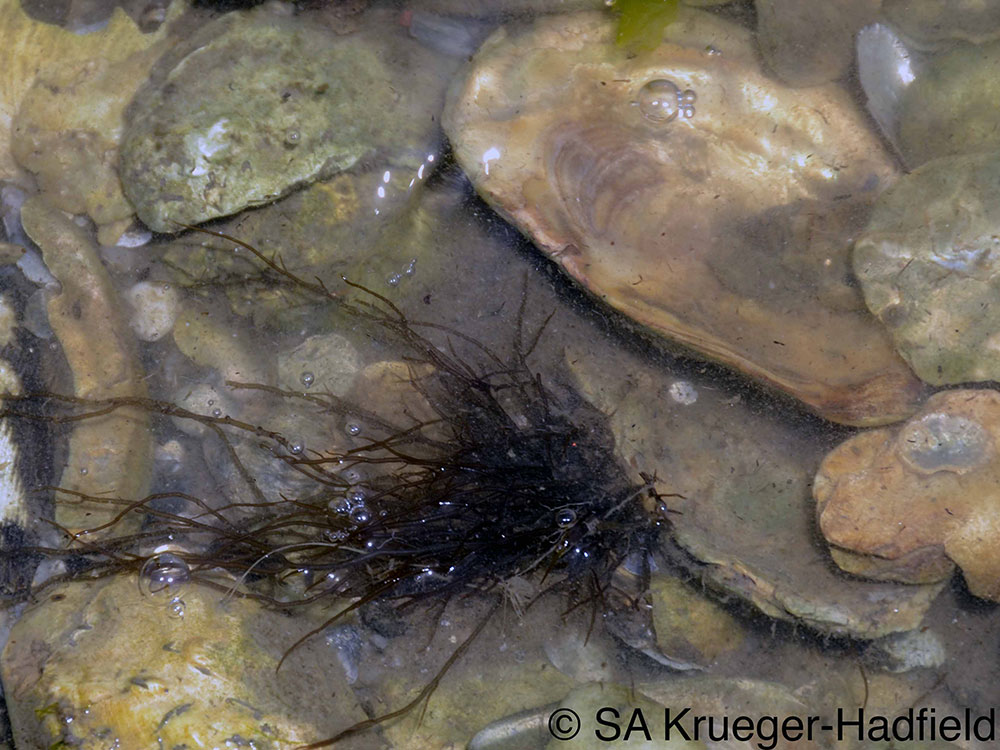 A female gametophyte fixed to shell hash at Ape Hole Creek, a site near Crisfield, Maryland. The sampling trip to the mid-Atlantic in 2014 helped solve some of the riddles of this invasion and laid the foundation for work the Krueger-Hadfield lab began in 2017 along the Delmarva. Image courtesy Stacy Krueger-Hadfield

That is how it works in many of the populations in Gracilaria’s native range, that is. But everything changed around the time of the Second World War, when Japanese oysters were introduced and cultivated in the United States. Through field samples collected in the northwest Pacific, North America and Europe, and by studying so-called “gray literature” — government and media reports, mainly — as a post-doc, Krueger-Hadfield and colleagues constructed a timeline and a hypothesis of how Gracilaria invaded. Japanese oystermen would wrap their oysters in seaweed for shipment, she says, and workers on the receiving end most likely dumped this equivalent of packing peanuts over the side of the transporting ships into local waters. (Similar events probably happened in Virginia, introducing Gracilaria to the U.S. East Coast.) Krueger-Hadfield has also examined samples of pressed algae in museum collections to track the spread of Gracilaria. “People have been pressing algae since Victorian times,” she said. “It was one of the few acceptable pastimes for genteel ladies.” 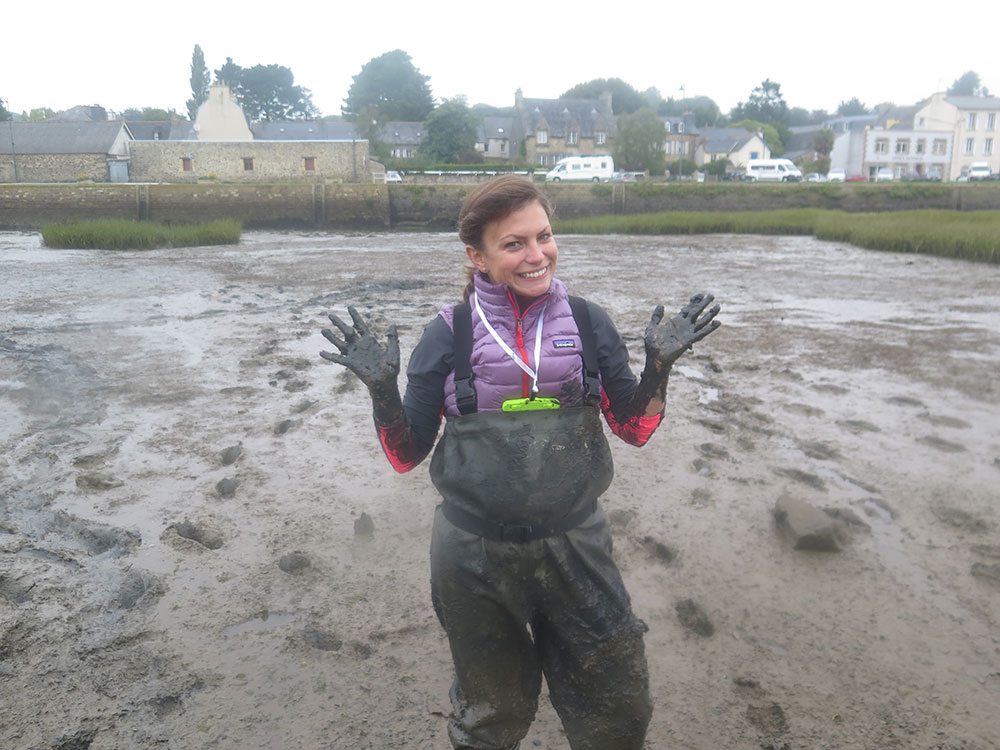 Krueger-Hadfield sampling in northwestern France. She got stuck up to her waist in mud and required about 45 minutes to extricate herself, she recalls. Image courtesy Stacy Krueger-Hadfield

Using a type of genetic sequencing, or genotyping, techniques she learned as a doctoral student in France, Krueger-Hadfield can make precise identifications of where a particular seaweed likely came from as well as what stage it is. “In essence, we use the same tools and analyses that commercial companies like 23andme use to determine a person’s ancestry,” she said. “We are just trying to figure out an alga’s ancestry.”

Krueger-Hadfield’s DNA analysis, which tracks variations in microsatellite regions and single nucleotide polymorphisms, traced the likely source of the invasion to a specific location in Japan, Matsushima Bay.

“Having knowledge of the source of an invasion provides a very powerful context with which to test questions about the evolutionary ecology of biological invasions,” Krueger-Hadfield said. “We now possess a large body of work on this particular alga, both from my post-doctoral work and from data we’ve generated in the lab here at UAB, enabling us to address the main theme of the CAREER award: the convergence of life cycle questions (why does one stage dominate after perturbations?) and reproductive system questions (what are the effects of self-fertilization, outcrossing and asexuality in a population?).” 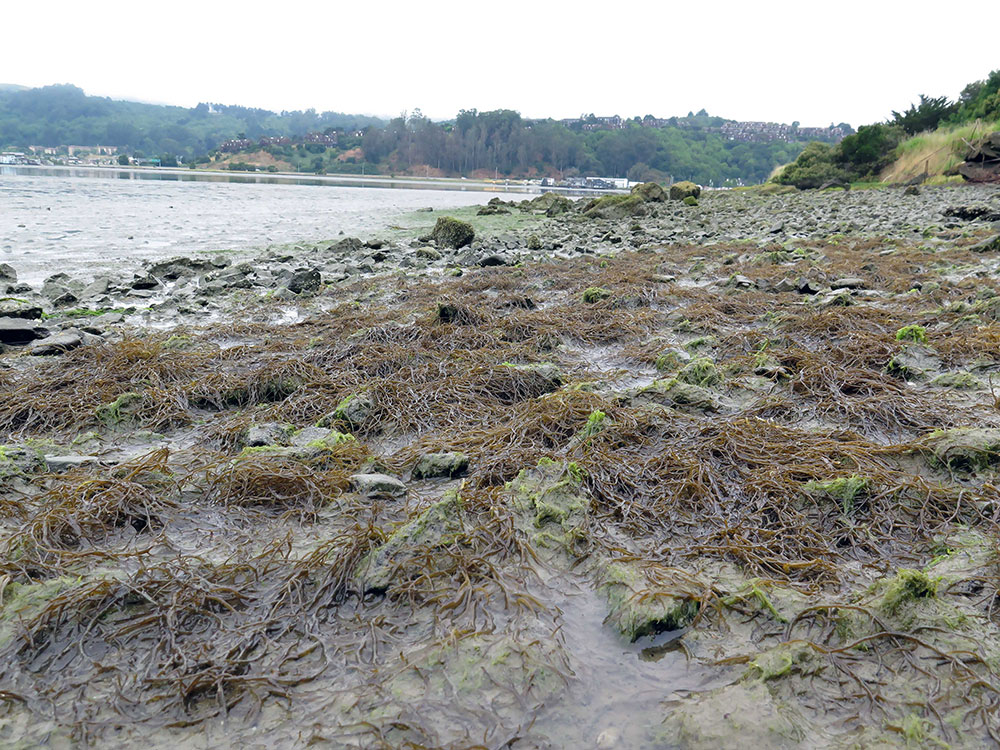 A non-native Gracilaria vermiculophylla population at Strawberry in Marin County, California. This site was sampled in Krueger-Hadfield et al. 2018 – a sampling effort from the Krueger-Hadfield lab at UAB that helped reshape how we were thinking about the ecology of this invasion. Image courtesy Stacy Krueger-Hadfield

“Humbling, exciting and a huge relief”

Being selected for a CAREER award “was humbling, exciting and a huge relief all at once,” Krueger-Hadfield said. “This award is the culmination of many years of hard work, but would not have been possible without a fantastic team composed of colleagues right here in Alabama and further afield in Virginia, Japan, Germany and France. I’m not sure I have fully wrapped my head around the honor, but I am incredibly grateful to have the opportunity to explore these questions with my collaborators.”

Once Gracilaria was introduced in North America and Europe, it began to take hold and reproduce. But not, as at home, always clinging to pebbles and shells through grippy attachments known as holdfasts. Many of the temperate, salty estuaries where Gracilaria invaded have soft-sediment bottoms, so they float freely on top of the mud and silt. Their life cycle and reproductive habits have changed as well.

Gracilaria is what is known as partially clonal, engaging in both sexual and asexual reproduction. In tough times, Gracilaria can break off pieces of itself that will float away and grow indefinitely (vegetative reproduction), although they lack holdfasts. Evidence amassed by Krueger-Hadfield and others, including the lopsided ratio of diploid to haploid individuals collected at invasive sites, points to an increase in this type of asexual reproduction.

In the soft-sediment sites where she finds Gracilaria in North America and Europe, “the gametophytes get eliminated,” Krueger-Hadfield said. “If we can figure out why, this gives us insight into how these different stages that look the same are not in fact the same — this will provide us with some predictive tools to expand to other seaweeds, both native and invasive, that are what has been termed ‘isomorphic.’”

Many eukaryotes are partially clonal, including parasites that are relevant to human disease, Krueger-Hadfield says. “Understanding the effects of these different ways of reproducing can have broad applications.” 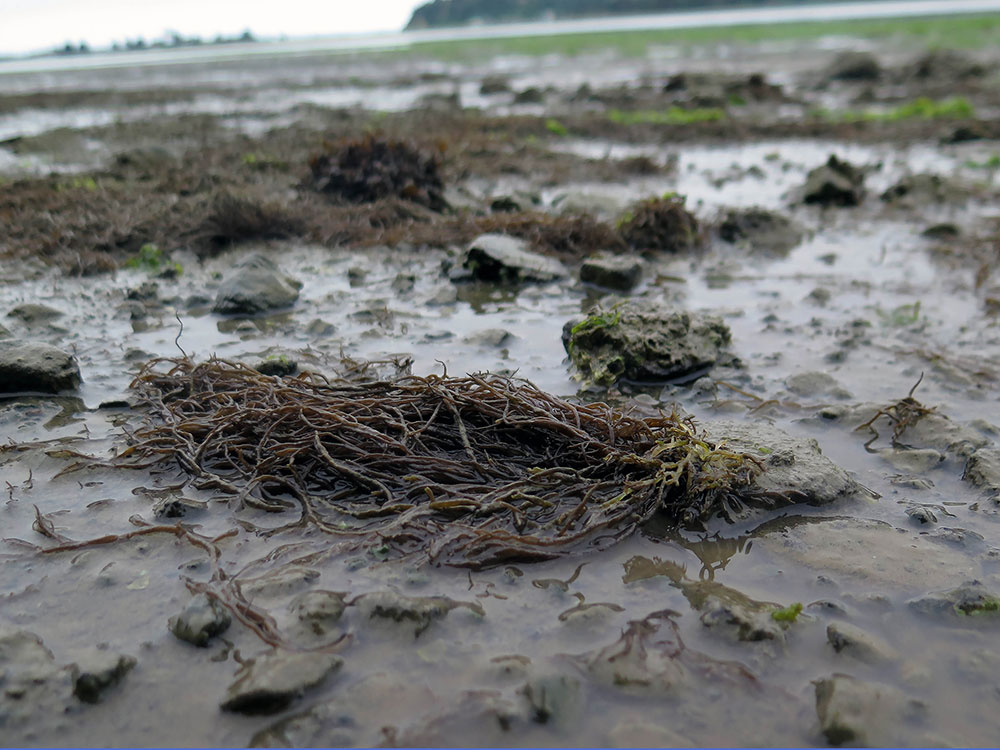 The differences may be due to different salinity and temperature combinations among habitats. Krueger-Hadfield will collect samples from Gracilaria’s native and introduced ranges and test their responses to changing salinity and temperature at the Virginia Institute of Marine Science Eastern Shore Laboratory, where she has worked since 2014. “It’s a fantastic lab space with vessels and running seawater,” she said. “Importantly, it’s also full of great people who enrich our field work and without whom we wouldn’t have generated the datasets needed to compose a cogent and competitive proposal for the CAREER award.”

It is not just haploid vs diploid; in previous work with a separate alga, Krueger-Hadfield and collaborators showed that changes in pH levels had stronger effects on sporophytes than on gametophytes. “That suggests that life cycle stages are not the same,” she said. “We don’t know, however, if one stage will be the weakest link under future conditions.” The CAREER award “will allow us to build a set of phenotyping assays that can be broadly applied to other organisms with this life cycle type,” Krueger-Hadfield said. “Thus, we would be able to predict how all stages of a life cycle might respond to future conditions. In an age of unprecedented biodiversity loss, these types of data, all based on a firm foundation of natural history, are critical.” 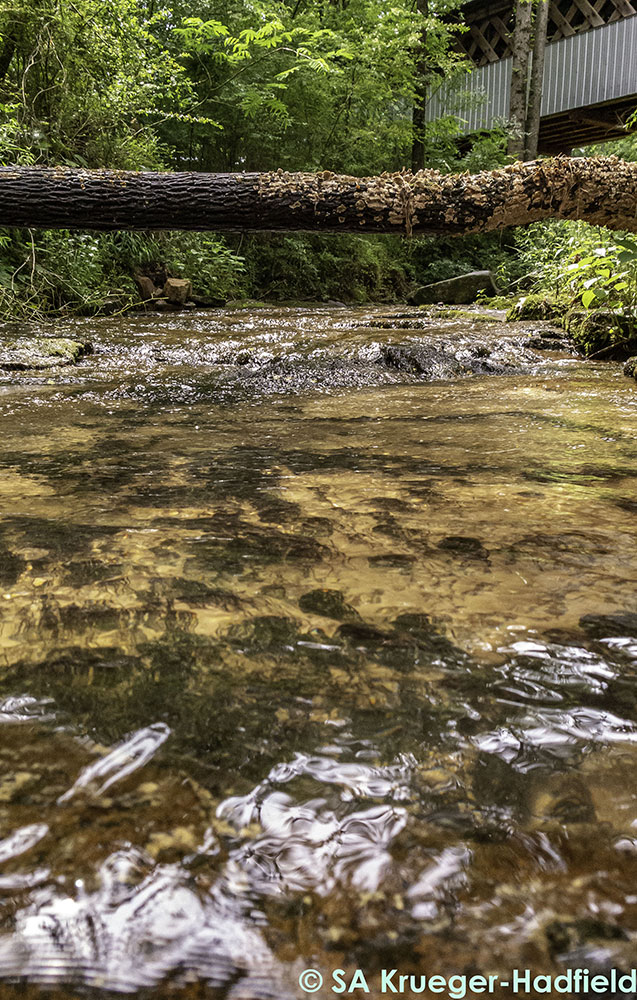 Student adventures in “their own backyard”

The CAREER award also will give Krueger-Hadfield funding to bring UAB students with her to the VIMS Eastern Shore Laboratory to join in her research and contribute to related research on freshwater algae in Alabama.

The Department of Biology already offers tremendous faculty-led study-abroad opportunities for marine science in the Galapagos, the Bahamas and Costa Rica, Krueger-Hadfield noted; but “not everyone has the resources to take advantage of that.” The NSF support will give “students an opportunity to get out into their own backyard, as well as a chance to go to a place in the Virginia shore that is a very different habitat to what they may have seen in Gulf Shores, and do real, fun science. That gives them a chance to awaken something they may want to pursue as a career.” Krueger-Hadfield also will offer this new summer Maymester course in 2023, tentatively titled Forensic Phycology, that will give undergraduate biology students the chance to “contribute to these data and work in Alabama streams,” she said. 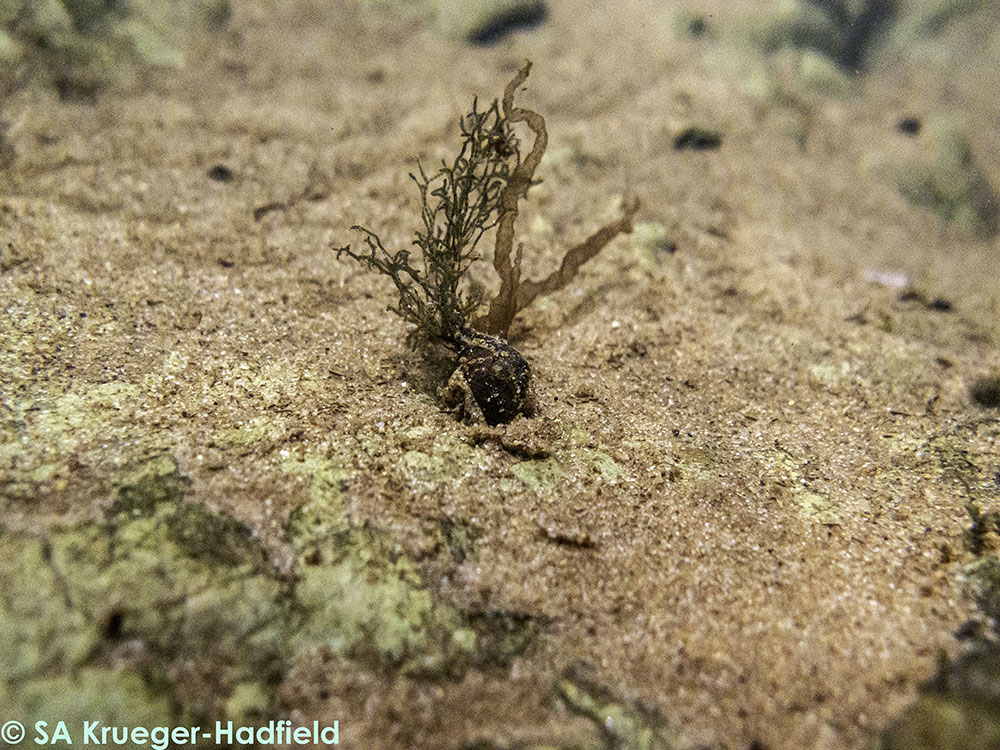 The freshwater red algae Viriscentia and Boldia fixed to a snail shell in a stream in Alabama. Image courtesy Stacy Krueger-Hadfield

The award also will fund innovative research into the ecology and evolution of freshwater red algae in Alabama streams. “The CAREER award will allow us to generate baseline biodiversity data on these algae and work with citizen-science volunteers in the Alabama Water Watch,” Krueger-Hadfield said. Her doctoral student, Sarah Shainker-Connelly, has grants from the NSF’s Graduate Research Fellowships Program and the British Phycological Society “to pilot these citizen-science efforts,” Krueger-Hadfield said. “If we have water-quality monitors out and about, they can cover much more water than we can alone.”