Corey Shum was talking with brain surgeons and rocket scientists within a week of beginning his UAB career in 2002, and he couldn’t have been more excited. 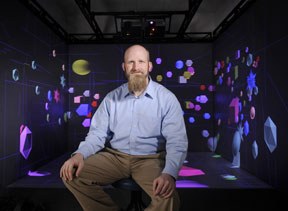 The investigators and physicians wanted to see their research data in high-tech ways — to help them with their own work and help others see what they were doing and ways they could collaborate.

“It was exciting,” Shum says. “They didn’t want to stay in their own spaces. And the opportunity to reach out and help people understand each other’s problems and how they can help has been a great joy.”

Co-workers have been impressed in Shum’s ability to help them solve problems and the attitude he displays in his role at programmer/analyst in the Department of Mechanical Engineering. His work in the Enabling Technology Laboratory (ETLab) has been crucial to many successes, they say. Through it all, Shum has displayed high ethical standards in a professional, responsible and diligent manner — all qualities that have earned him selection as October’s Employee of the Month.

The ETLab employs three faculty members and three full-time programmer staff members immersed in research funded by major agencies, including the Department of Defense, NASA, Department of Energy, National Institutes of Health and National Science Foundation. Shum is one of the programmers. His primary responsibility is to develop software for projects that need computer graphics — virtual- and augmented-reality technologies, high-performance computing and biomedical simulations, for example.

“Corey’s contributions to these research projects are so significant and instrumental that I strongly believe that without his knowledge and diligence, many major research projects would have fallen short of what we have achieved today,” says Alan Shih, research professor and director of the ETLab. “Corey worked with me to initiate many new ideas and technologies. Many of them continue to be funded by federal agencies and — because of their significance in technology — have international patents pending or have been licensed to commercial entities by the UAB Research Foundation.”

The VIP is a prime example of that. The goal of the project — a collaboration between the Department of Surgery and the ETLab — was to develop a remote-assistance technology for surgical procedure.

Shum worked diligently with the team to integrate hardware and develop software to design a system for a successful neurosurgery trial that attracted the attention of NASA’s National Lab Office, which investigated the feasibility of using the technology in the International Space Station.

“Corey was instrumental in the development of the VIP system, which enables expert surgeons to virtually enter surgical fields for assistance and guidance,” says Barton Guthrie, M.D., professor of neurosurgery. “This technology has attracted substantial attention and accolades from the medical community and private industry.”

The VIP technology has been licensed to the company VIPAAR LLC, which is housed in Innovation Depot, UAB’s high-tech business incubator.

“I’ve had wonderful opportunities to develop a number of projects that have been useful, and the VIP system has been a really exciting one,” Shum says. “Not everything we try works, but we keep driving forward to make more of them a reality.”

The NF1 Laser3D invention was especially important to the work of Amy Theos, M.D., associate professor of dermatology.

Theos wanted a way to objectively measure and follow the growth of neurofibromas, a common skin tumor seen in patients with a genetic disorder known as NF1. Theos says Shum was instrumental in the design and execution of her study.

“I believe this study would not have been completed without Corey’s involvement,” Theos says. “Corey operated the scanner during all patient visits, was able to analyze the data and fix the many technical problems we ran into during the course of the study.”

That doesn’t include the support he has provided to UAB students. Christopher Lowther, assistant professor in the Department of Art & Art History and co-creator of the Leonardo multi-disciplinary program, says students in his time-based media courses have benefitted greatly from Shum’s guidance.

“My 3D modeling students use the ETLab as a component of virtual reality, and Corey’s assistance has been invaluable,” Lowther says. “Without his assistance, there would be no virtual reality component to 3D modeling in art. He is very accommodating and is able to customize his approach so that students with less technical expertise are still able to learn and enjoy the process. My students love Corey, and they are attracted to his nurturing approach.”

Shum says he is fortunate to have a group of co-workers around him dedicated to helping UAB faculty and staff achieve the most they can out of the work.

“We’re very passionate and dedicated; this isn’t something you can leave at the office,” Shum says. “There’s no way to distinguish between our lists of personal and work projects — they’re all the same thing. We’re just trying to do our best to enable collaboration between as many groups on campus as we can.”