Stephen Yoder was the new guy in town in 1995, ready to assume his new role as general counsel of a large Birmingham bank. 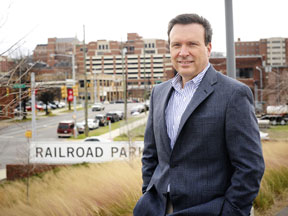 He didn’t wait long to begin learning about his new community, becoming a board member of then-named Eye Foundation Hospital in 1996. By 1999 he had taken on the ambitious role of founding board chair for the Vulcan Park Foundation, which was charged with saving the iconic Birmingham Iron Man that overlooks the city.

It was at a Leadership Birmingham meeting that same year when Yoder, now an assistant professor and honors program director in the UAB School of Business, first saw a Birmingham icon who immediately became an inspiration.

“It actually was the very first meeting of my Leadership Birmingham class in the summer of 1999,” Yoder recalls. “The meeting was at the Birmingham Civil Rights Institute, and I can vividly remember being impressed with Odessa Woolfolk, one of the founders of Leadership Birmingham. I’ve always admired people who’ve been successful leaders in their professional lives and in their communities. I remember looking at Mrs. Woolfolk and thinking what an inspiration she had been for this community.”

Yoder has spent his 16-plus years in Birmingham engaged in the community as a servant leader with intense effort and caring concern, and now his name is linked with Woolfolk. Yoder’s peers have responded to his leadership and honored him for his years of service by selecting him to receive the 2012 Odessa Woolfolk Community Service Award. The award was presented during the annual Faculty Awards Convocation at 4 p.m. Wednesday, March 7 in the UAB Alumni House. Eleven faculty also will be honored with the President’s Award for Excellence in Teaching during the ceremony, and the winner of the Ellen Gregg Ingalls/UAB National Alumni Society Award for Lifetime Achievement in Teaching will be recognized.

Those who nominated Yoder highlighted his leadership in community projects as instrumental to their successes, and one of the biggest on the list was the renovation of Vulcan.

In 1999, after almost 20 years of false starts for renovations, Vulcan stood on his pedestal battered and beaten by decades of exposure to the elements. Yoder faced the daunting task of galvanizing community and regional support for restoring the statue and renovating Vulcan Park — a massive $16 million project.

Yoder rallied together what Vulcan Park and Museum President and CEO Darlene Negrotto calls an exceptional team of civic leaders around a clear, shared vision. Yoder led as the founding chair and president of Vulcan Park Foundation and crafted a public/private partnership that has since become a model for the city.

“With grace and respect, Mr. Yoder built strong relationships among diverse groups and individuals that inspired citizens to recognize our ability to unite to achieve a truly significant goal,” Negrotto says.

In fact, Yoder’s vision extended beyond restoring Vulcan to creating a park and museum that has welcomed more than 1 million visitors from all states and more than 80 countries. In 2006, the restoration of Vulcan received the nation’s highest honor from the National Trust for Historic Preservation.

Yoder says his leadership role in the project developed over time and says none of those things could have been accomplished without the dedicated help of numerous members of the community. “One lesson from that experience for a leader is surrounding yourself with the right people and largely getting out of the way,” Yoder says. He cited as examples in the Vulcan project Philip Morris, Alice Bowsher, Victor Hanson III and Stewart Dansby.

“I had never even set foot in Birmingham until 1995, but I was really interested in the history, and it was a way to get to know people,” Yoder says. “It wasn’t work. It was an enjoyable process of getting to know about the history and the people of the city.”

Yoder says being a part of organizations including Operation New Birmingham, Railroad Park Foundation, United Way of Central Alabama, Birmingham Business Alliance, Eyesight Foundation of Alabama (for which he is chair) and the Cultural Alliance of Greater Birmingham have enabled him to meet and learn from many outstanding leaders.

One of them was Neal Berte, former president of Birmingham-Southern College. Yoder watched then-president Berte bring together business and government leaders every month to brainstorm ideas to help the community thrive.

Yoder saw the sessions were helpful and Berte’s leadership was instrumental in the endeavor. Each year Yoder asks Berte to speak to his students on servant leadership.

Bringing leaders to campus to talk and meet with students is a big deal for Yoder. Among the other leaders who have come to speak at Yoder’s request are Don Logan, president of the Birmingham Barons, Bill Smith, chair of Royal Cup Coffee, Stan Starnes, CEO of ProAssurance, Johnny Johns, CEO of Protective Life, Drayton Nabors, former CEO of Protective Life and former Alabama Supreme Court chief justice, and recently Art Beattie, CFO of Southern Company and a UAB graduate.

Yoder believes it’s important for students to listen to the experiences and ideas of leaders, and also to talk to them. It’s a big step toward learning to be a leader.

“I really want the students to see that leadership is about interpersonal relationships,” Yoder says. “It’s not a formula or something you can build in a spreadsheet. It’s all about relationships. And the best way to do that is to let them see up close the actual leaders.”

School of Business Dean David Klock, Ph.D., says his students are fortunate to have the opportunity to learn from a leader the caliber of Yoder.

Klock says Yoder has been a go-to person when the school has a critical need to plan and execute community-based service-learning opportunities for students. Klock points to this past year when the School of Business partnered with the UAB Benevolent Fund and the UAB Educational Foundation in creating a significant grant and forgivable-loan program to help Birmingham-area residents affected by the April 27 tornadoes. Anonymous community leaders provided the money for the program.

“Steve immediately agreed to lead this effort and recruited UAB students to be engaged in this service project,” Klock says. “It was a complex project requiring technical insights in banking and in law, as well as skills in nurturing students in how best to be servant leaders in helping many individuals with pressing financial issues resulting from the devastation. His dedication and effectiveness in getting past numerous complex technical and behavioral issues has positively changed many lives — both tornado victims and our students.”