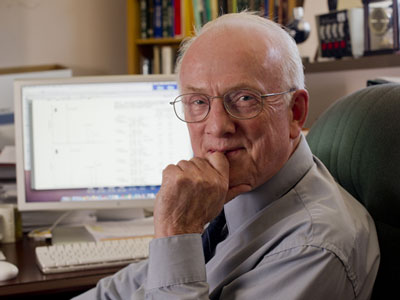 Stephen Barnes, Ph.D., a London native, still remembers how tough times were in post-World War II England. The fighting had devastated the country’s economy, and because resources were not available to expand food production and imports, rationing was common.

“We had rationing of things like sugar and butter until I was 10 years old,” says Barnes, a UAB professor of Pharmacology & Toxicology. “That was the world we knew.”

Children like Barnes were expected to get an education and make money to help get the country back on track. Barnes figured that, like many of England’s youth, he would wind up in industry. But his applied chemistry degree and industrial training instead steered him into the area of research, where he eventually worked under the tutelage of Nobel Laureate Sir Ernst Chain, the co-discoverer of penicillin. There he began using a form of metabolomics, now very popular in modern biomedical research.

Barnes has spent the past 50 years — 35 of which have been at UAB — developing a broad range of academic interests. He has a long history of grant support, resulting in many millions of dollars in funding for UAB, his lab and colleagues. He also is a professional consultant to companies, institutions and agencies and has been acknowledged for his work with numerous awards and designations. The most recent of these is his selection as the 2012 Distinguished Faculty Lecturer, the UAB Academic Health Center’s most prestigious faculty award.

As the honoree, Barnes will deliver a free public lecture at 4:30 p.m. Wednesday, Oct. 10 in the Alys Stephens Center’s Sirote Theatre. A reception will follow from 5:45 to 6:30 p.m.

“This really is a phenomenal honor,” Barnes says. “When I look back at the history of the award, I’m in the shadow of giants. These are some amazing people, many of whom I came to know well. I owe them a lot for conveying all of their wisdom.”

Barnes’ expertise has had a lasting influence on UAB and has led to several hospital and nonacademic appointments, including as director of the Targeted Metabolomics and Proteomics Laboratory, the Acute Kidney Disease Center Bioanalytical Core Facility, the Skin Disease Research Center Proteomics Core, the Lung Health Center Proteomics Core, and the Center for Nutrient-Gene Interaction. He also was associate director of the Purdue-UAB Botanicals Center for Age-Related Disease for the duration of its 10-years.

In particular, Barnes provided critical leadership in the development of modern mass spectrometry at UAB with encouragement from Al LoBuglio, M.D., former director of the UAB Comprehensive Cancer Center. Barnes started the Mass Spectrometry Shared Facility in the Center in 1993 and was its director from then until 2009.

During his tenure there and in the Targeted Metabolomics and Proteomics Laboratory, the National Institutes of Health and the National Center for Research Resources awarded Barnes numerous grants for the purchase of cutting-edge technology to expand his own research on bile acid and polyphenol metabolism and support the research of more than 100 other UAB investigators on an annual basis.

“The current ability of the UAB faculty to measure their molecules of interest in miniscule amounts is, in large part, due to Dr. Barnes’ contributions, both intellectual and technical, to our scientific village,” says David Allison, Ph.D., distinguished professor of Biostatistics. “These areas of research have become his passions and have served as a cornerstone throughout his scientific career, resulting in major contributions to the UAB and international scientific communities.”

Barnes’ groundbreaking research on the health benefits and actions of soy has been a key component of his time at UAB and has led other soy research colleagues at national meetings to refer to him as the “Godfather of Soy” — a recognition of his leadership in the field.

Barnes’ approach involved combining a wide variety of experimental methods ranging from animal models and microarray analysis to high-resolution mass spectrometry. His initial interests in the role of diet in cancer have expanded to other chronic diseases, including lens cataractogenesis.

“Prior to Steve’s involvement in the late 1980s, research on soy effects on health was primarily subjective, anecdotal and involved uncontrolled observations of treated patients,” says Thomas B. Clarkson, professor of Comparative Medicine in the Wake Forest School of Medicine. “Almost singlehandedly, Steve transformed the research internationally to one based on rigorous scientific methodology with a focus on cellular mechanisms.”

Barnes says his foray into soy research happened serendipitously and brought him into the role of studying food and chronic disease. His research expanded from soy and breast cancer into botanicals and dietary supplements. As a result, a significant aspect of his biological research is in the role of nutrition and public education in the prevention of chronic disease, including atherosclerosis with Victor Darley-Usmar, Ph.D., professor of Pathology and director of the Center for Free Radical Biology, and Rakesh Patel, Ph.D., professor of Pathology; cancer and neurodegeneration with Helen Kim, Ph.D., associate professor of Pharmacology and Toxicology and co-director of the Targeted Metabolomics and Proteomics Laboratory; and vision with Om Srivastava, Ph.D., professor of Vision Sciences.

Barnes, one of a select group of 30 scientists who comprise the NIH Council of Councils that advises the NIH director on policies and action, says the goal of scientific research should be promoting wellness and the prevention of disease.

“There’s no question that understanding how prevention works is key,” Barnes says. “Look at soy research, for example. After many years of research, my colleague Coral Lamartiniere, Ph.D., emeritus professor of Pharmacology & Toxicology, and I have found out that soy is most effective if given early in life. Many of the foods that we eat, such as soy, contain biologically active components that modify expression of our genes. That imprinting is what then affects the risk of disease later on.”

While his research has brought national and international attention, colleagues say Barnes’ impact on students has been equally important.

“The number of trainees rotating through his laboratories, the graduate students, postdoctoral fellows, visiting faculty and undergraduate and high school students all attest to his willingness to share his scientific knowledge with others,” says Clinton J. Grubbs, Ph.D., director of the Chemoprevention Center. “What better mark of a Distinguished Faculty Lecturer can there be?”

Indeed, Barnes is as concerned about the impact he can have on students as he is about his research endeavors.

Barnes remembers how vital it was to him that his early mentor Nobel Laureate Chain taught him the value of lateral thinking and how to develop alternative ways of explaining data and thinking of experiments that can distinguish between those alternatives. Unilever scientist Professor Tony James, co-inventor of gas-liquid chromatography, and Dame Sheila Sherlock at the Royal Free Hospital in London also made indelible impressions on a young Barnes.

And that is why he speaks with especial pride when he talks about Miranda Collier, a junior honors program student from Dothan majoring in chemistry. Barnes was able to arrange for her to study at the University of Oxford this past summer in the laboratory of Professor Carol Robinson.

“My early mentors were so critical,” Barnes says. “I had people who recognized my talents and potential, and pushed me on to the next step. There’s an irony in that with Miranda. She’s where I was 45 years ago. I hope she can take the chance she had this summer and run with it.

“People gave me the chance, and here I am.”