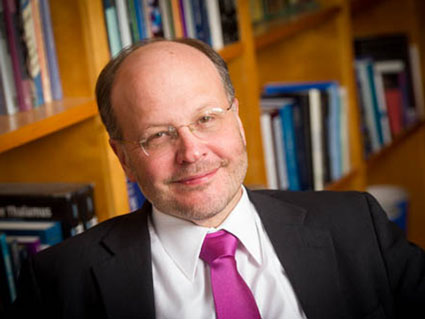 James Meador-Woodruff, M.D., Heman E. Drummond professor and chair of the Department of Psychiatry in the UAB School of Medicine, has been named the recipient of the 2013 Research Mentorship Award of the American Psychiatric Association (APA).

The award is presented annually to one academic psychiatrist who has, in a significant traditional or innovative manner, fostered the pursuit of trainee research within his university department.

This is not Meador-Woodruff’s first recognition for mentoring. He was awarded the 2007 Kempf Fund Award for research development in psychobiological psychiatry from the American Psychiatric Institute for Research and Education (APIRE). The award recognizes a senior researcher who has made a significant contribution to research on the causes and treatment of schizophrenia as both a researcher and a mentor.

The Kempf Fund Award provided funding to support the development of the research career of Robert McCullumsmith, M.D., Ph.D., while he was working in a mentor-trainee relationship with Meador-Woodrufff. McCullumsmith joined the UAB faculty along with his mentor from the University of Michigan in 2006.

Meador-Woodruff recently spoke to The Reporter about the benefits of mentorship, why he enjoys it and how it furthers research endeavors.

Q: What are your thoughts on being recognized with the 2013 Research Mentorship Award by the APA?

A: I am extremely honored to have been selected for this recognition of my now several decades of mentorship activity in psychiatry and neuroscience. I have a longstanding interest in teaching and mentorship, and about 100 trainees have rotated through my lab at UAB and previously at the University of Michigan. In fact, my start in academic leadership was a stint as the director of a training program at Michigan for psychiatry residents seeking a career in research, and I remain active in training and mentorship activities both locally and at the national level. This particular award is especially meaningful for me because it came as a total surprise, with the nominator coming from within the APA itself. It was thus totally unexpected which makes it all the more special.

Q: Did you have mentors who by their actions showed you the value in investing in others?

A: Absolutely, and I suspect that every effective teacher/mentor has these people in their pasts who influenced them and likely shaped their careers. I have been exceptionally fortunate to have had several different research mentors in my own past, each of whom made a meaningful impact on my success, going back to my freshman year in college at the University of Richmond. At each step of my career and professional development, there is someone I can clearly identify who filled this role.

Q: Why is being a mentor important to you?

A: There are a few reasons. First and foremost, given how blessed I feel to have had influential mentors in my own life, I have a strong sense of wanting to give back to subsequent generations of young people. I find that young people enter their careers full of enthusiasm but don’t have a clear sense of how to navigate the complexities of an academic career. I find as I get older I spend as much if not more time mentoring people about their careers, managing labs and directing their programs than I do on science itself, so I find myself not only in the role of a research mentor, but career coach, as well. Finally, a former faculty member in my department used to remind the faculty that we are faculty members in a school of medicine, emphasizing the “school” part. And for me, an important part of being in this setting is teaching and mentorship.

Q: What do you enjoy the most about mentoring others?

A: Watching them succeed. I have been known to get more visibly excited when someone publishes a paper then they sometimes are. I really enjoy watching my protégés publish important work, get their own grants funded and most recently watching them graduate their own graduate students and blossom into excellent mentors themselves.

Q: How much pride do you have when you see someone you trained — like Robert McCullumsmith — experiences their own professional successes?

A: As noted above, I have much pride and personal satisfaction when my mentees succeed. Rob is a great example, I have known Rob for 12 years or so since he was fresh out of medical school, and was his research mentor and career coach, but now I am a collaborator/colleague of his. He recently was promoted to associate professor with tenure at UAB, and to watch someone go from medical school to that level is immensely gratifying. But I have an entire group of people like this, several of whom are at UAB and all are doing well. One of my first graduate students at Michigan, Sarah Clinton, Ph.D., is now an assistant professor in my department, so I seem to hang on to some of them a long time!

Q: Have you found that mentors often can learn much from their mentees?

A: Of course. I delight in surrounding myself with people smarter than I am, and it certainly seems all of my protégés have been! But not only have I learned to be a better scientist from my mentees, I have learned other collateral skills as well. My wife (of more than 30 years now) and I have one son, who is 10; we started pretty late. I have no doubt that my mentees helped me to be a better parent along the way, as well.

Q: How valuable have these mentor-mentee relationships been in terms of benefitting your research efforts into schizophrenia?

A: Oh, it’s been a tremendous amount. I always have tried to have a collaborative spirit with trainees, and I encourage them to perform at a level or two beyond their actual level of training and experience (I have found that many college students are able to function like graduate students, graduate students like postdocs, and so on). My lab has not run in a particularly rigid style of everyone doing experiments around my ideas, but we have used them to create a framework to work from, and this approach has led to some very creative ideas over the years. As one of my favorite examples, when Sarah Clinton was finishing her Ph.D., she stumbled across some observations that were internally inconsistent that led to what for the time seemed like a wild unifying speculation that turned out to probably be correct. And it led to a four-year NIH grant that I wrote using her dissertation work as the preliminary data. It in some ways still anchors a core theme my lab studies.

Q: What advice do you have for faculty members who may have an interest in being a mentor?

A: I think it takes work; it is very much like parenting and not something we pay as much attention to in training scientists as we should. We teach people to be great scientists, but sometimes don’t spend the time that we should teaching them to be lab leaders and mentors. It takes work and practice and continuing to seek advice and informal mentoring from those who have gone before you. I still actively seek mentoring and coaching.