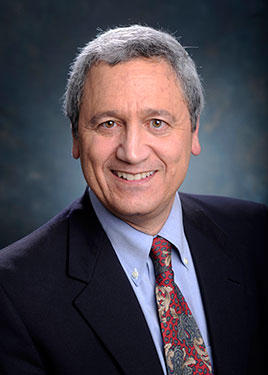 As an NASA astronaut and scientist, Larry DeLucas, O.D., Ph.D., has been instrumental in bringing the heavens to earth for students who might otherwise never have been exposed to science and technology.

“He’s been an exemplary advocate for science education and a source of inspiration for thousands of students from primary school to graduate levels,” says a colleague at NASA, with whom he now partners to make science accessible to all students.

As director of UAB’s Center for Biophysical Sciences and Engineering, DeLucas brought UAB into the Alabama Space Grant program, offering high school students in underserved areas the opportunity to study protein crystallization in the classroom and lab, design experiments, and launch those experiments into space on a Russian Soyuz capsule to be performed on the International Space Station.

For these efforts — and many others — DeLucas has been named the 2013 Odessa Woolfolk Community Service Award recipient. DeLucas was selected for the honor by his peers, who have responded to his leadership, ingenuity and professionalism through the years. The award will be presented during the annual Faculty Awards Convocation at 4 p.m. Wednesday, April 10 in the UAB Alumni House. Eleven faculty also will be honored with the President’s Award for Excellence in Teaching during the ceremony, and the winner of the Ellen Gregg Ingalls/UAB National Alumni Society Award for Lifetime Achievement in Teaching will be recognized.

“My accomplishments do not begin to compare with those of Mrs. Odessa Woolfolk or many of the past recipients of this award,” says DeLucas, who began his career at UAB in 1971 as an undergraduate student and has appointments in the School of Optometry, the Comprehensive Cancer Center and as the director for the UAB Center for Structural Biology. “Thus, my selection as the 2013 recipient of the Odessa Woolfolk Award is an incredible honor. The award is particularly gratifying because it recognizes two activities, educational outreach and entrepreneurialism, that have been high priorities throughout my career.”

DeLucas devotes his time and energy to serving as an “ambassador for science, innovation and leadership,” says a colleague. His partnership with Calhoun Community College gives biology students access to UAB laboratory space to further their scientific education. His willingness to advise honors students, elementary-school students and national and international scientific organizations makes him, in the words of one community partner, “an inspiring character responsible for turning many students on to science” and “a considerable positive force.”

DeLucas also participates in the Beads of Hope program, in which strings of beads are flown into space to serve as a symbol of courage and replicas of those beads are presented by an astronaut — DeLucas himself — to children with life-threatening illnesses to help them find their own courage.

“Dr. DeLucas has enormous impact on our university, our local communities, the state of Alabama and beyond,” says a colleague. “He is one of a very select group of individuals who are extraordinary scientists and exemplary leaders and who have a passion for making a lasting impact.”

DeLucas, who has received five degrees from UAB, says the future of the United States and its leadership position in the world will depend on the capabilities of children and young adults who choose to pursue careers in science and engineering. That’s why he has always believed it is important to reach out to youth and motivate them to pursue careers in these fields.

“When I returned from my space shuttle flight in 1992, I quickly realized how my astronaut/scientist background provides a powerful platform that could be used to inspire students,” DeLucas says. “As a result, I have devoted a significant amount of my time to participating in educational outreach for elementary, high school and college undergraduate students.  I also believe scientists must educate the general public with regard to the importance of supporting fundamental research to maintain our country’s preeminence in scientific innovation and technology development.”