McClintock honored for commitment to outreach 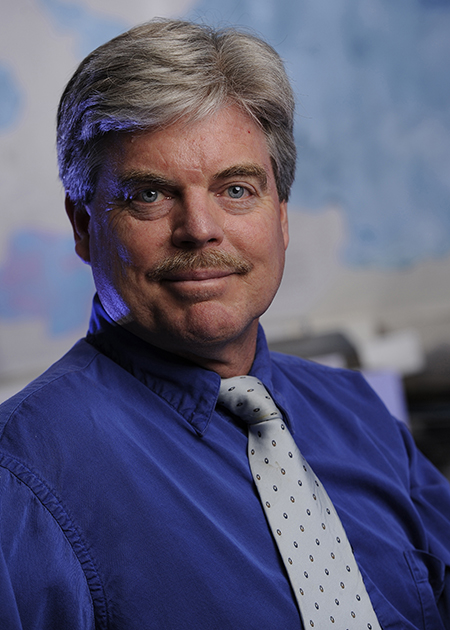 Endowed Professor of Polar and Marine Biology Jim McClintock, Ph.D., has dedicated nearly 30 years to educational outreach, and he is one of the most highly recognized scientists in the Birmingham community.

McClintock, who uses his lifetime of work in Antarctica to educate students and the public about the value and excitement of pursuing science on the remote continent, was awarded the Odessa Woolfolk Community Service Award during this year’s Faculty Awards Convocation.

“He has actually intensified these activities in recent years because of his concern about climate change and the consequences this may have on life on this planet,” Marion said. “In addition, he has always spread the word about the values of scientific research and has enlightened thousands to the wonders of the Antarctic, the primary location for most of his research.”

He recently returned from his 14th research expedition to Antarctica — where he and his research collaborators have become among the world’s authorities on marine chemical ecology during the past two decades.

McClintock came to UAB in 1987 with nearly 10 years of experience in the classroom and as a researcher.

“Jim has consistently been the department’s shining light of scholarship,” Marion said.

McClintock has authored more than 235 scientific manuscripts, has brought in millions of dollars of grant funding, has served on numerous committees, has had his research featured in local, national and international news outlets, has been recognized with several awards and has given hundreds of invited presentations to students of all ages and community organizations.

Michael Wyss, Ph.D., director of the Center for Community OutReach Development (CORD) and professor of cell biology and medicine, said McClintock has helped to greatly increase the interest of all K-12 CORD participants in science education.

“He is a great science education resource for CORD, for UAB and for the area, and his impact is perhaps felt most in the underserved schools, which often lack the role models, like Jim, who can help shape their vision for their future,” Wyss said.

Charles D. Amsler, Ph.D., professor of biology, who has worked with McClintock for more than 20 years, said his commitment to educational outreach within the community is unparalleled.

“It is hard to beat pictures of penguins and whales and of icebergs and snow-covered mountains, to capture an audience’s attention,” Amsler said. “But Jim does much more than that. He uses that attention to not only entertain but, at the core, to educate.”

Amsler said McClintock’s presentations interweave ecology, organismal biology and the other aspects of the natural sciences, while, at the same time, being entertaining.

His book “Lost Antarctica: Adventures in a Disappearing Land” (Palgrave/MacMillan, 2012) has garnered considerable national and international praise. In June 2013, a video short based on his book was produced and released by the EO Wilson Biodiversity Foundation.

McClintock has been the recipient of numerous awards and distinctions including the UAB Ellen Gregg Ingalls Recognition for Excellence in Teaching, the UAB Caroline P. and Charles W. Ireland Prize for Outstanding Scholarship and the Wright A. Gardner Award for the most outstanding scientist in Alabama. He is an elected Fellow of the American Association for the Advancement of Science.

In 1998 the United States Board on Geographic Names designated a geographic feature in Antarctica as McClintock Point in honor of his contributions to Antarctic science.