Sisiopiku says her greatest accomplishment is seeing her students succeed 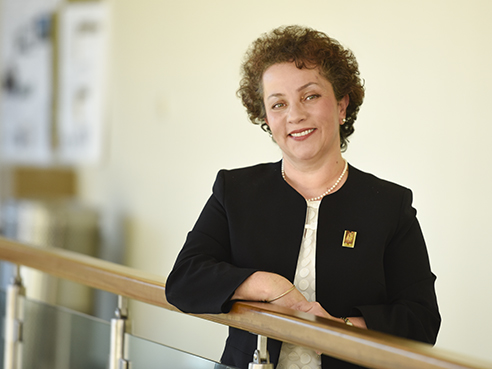 “Engineering is cool because you build things that people can use,” she said.

So began her interest in civil engineering. She moved to the United States for graduate school nearly 30 years ago and worked at Michigan State University before joining UAB in 2002 in the Department of Civil, Construction and Environmental Engineering. Here she is an associate professor and an expert in transportation engineering.

“As a transportation engineer,” she said, “my research work has an impact on how people live and move from place to place to meet their travel needs, which accomplishes my goal to serve the people and the community.”

For her work in the field and contribution to the engineering profession, Sisiopiku was named 2017’s Educator of the Year by the Engineering Council of Birmingham, the first member of UAB’s faculty to receive the award.

Inside and outside the classroom

Sisiopiku is motivated to make sure her students are successful. For her, that means helping them learn just from their coursework and from doing research, which is where her work with the TREND Lab plays a role.

“An educator is not just a teacher, but a mentor and a facilitator,” she said. “I work with both undergraduate and graduate students and advise them to develop skills that would be useful for their careers and that distinguish them from the next applicant with a degree. It’s important for students to be involved in research, where they develop critical thinking and learn to apply skills to deliver a result.”

She also helps students advance themselves professionally outside the classroom and lab by helping them attend professional conferences, taking them to competitions and working with them on technical papers for presentation and publication.

“These are very valuable experiences,” Sisiopiku said. “As an educator, I don’t just settle for the minimum. I want to help students go after those opportunities to help them distinguish themselves and build a good foundation for future success.”

When Sisiopiku was studying civil engineering in Greece, she said about half the students were women. Being in the United States, where comparatively few women enter the field, inspired her to more actively encourage girls to consider careers in engineering.

Each year, Sisiopiku is the event director for Girls in Science and Engineering Day, which enables middle school girls to participate in science and engineering workshops led by women professors, scientists and students from UAB and the Birmingham communities.

“Many of them come from under-served areas and don’t have anyone in their immediate environment who is a woman and an engineer,” she said. “I want to instill in them the idea that it’s a career where they have a good potential for success.”

In 2014, Sisiopiku was named a fellow of the Institute of Transportation Engineers, becoming the first woman in Alabama to receive the honor. In 2017, the UAB Reporter featured her as one of five “Women Who Innovate” during Women’s History Month. She also is a long-serving member of UAB’s Commission on the Status of Women, a member of the American Council for Education’s Alabama Network for Women Leaders in Higher Education and chair of the UAB chapter of the American Association of University Women Relations Committee.

“Leaving family and friends behind and coming to the states to expand my educational opportunities pushed me a bit harder to really achieve great things so that I can be a good role model for my students and others who strive to fulfill their dreams,” she said.

Throughout her academic career, Sisiopiku has published more than 190 books, journal papers and conference papers and has presented numerous technical papers, workshops and seminars. She has built academic and research partnerships as the principal investigator (PI) or co-PI for research projects totaling more than $10 million. She has chaired multiple professional committees and received numerous awards for her professional achievements and contribution to the transportation engineering profession. In 2010, she received the Dean’s Award for Excellence in Mentorship and the UAB President’s Award for Excellence in Teaching in 2007.

But ask her what matters most, and she’ll tell you this: she taught hundreds of undergraduate and graduate students and graduated 48 masters students and 9 doctoral students. Her students have gone on to assume academic positions, take lead roles at transportation agencies, open their own companies or become successful consultants, and Sisiopiku said it brings her a lot of joy.

“I think this is what educators leave behind,” she said. “It’s not just an extra report or paper to our name, although we’re after those as well, but I think being able to change the lives of students and give them the means to succeed and become useful to society, and the profession, and happy in life — that’s what makes my day.”