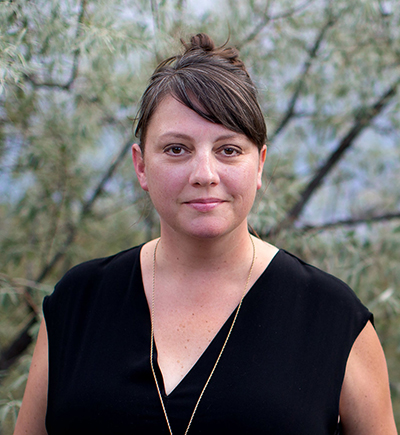 Stacey Cofield, Ph.D., associate professor in UAB’s Department of Biostatistics and recipient of the President’s Award for Excellence in TeachingFirst Stacey Cofield wanted to be a research biostatician in sports medicine. Then she met Al Best, a biostatistics professor at Virginia Commonwealth University during the first year of her doctorate program.

Fifteen years later, Cofield is an associate professor in UAB’s Department of Biostatistics and recipient of the President’s Award for Excellence in Teaching, which honors those who have demonstrated exceptional accomplishments in classroom instruction. She wouldn’t have wound up in academia, though, if it hadn’t been for Best.

While a doctoral student, Cofield worked as Best’s teaching assistant for three years and watched him consistently inspire and engage students. One mantra he frequently repeated was, “Stop. Think. Tell the story.” Cofield now has those words displayed in her office, and they influence how she teachers her students.

“Biostatistics uses data to answer research questions. Telling the story involves describing where your data came from, what’s in the data, what’s the question you set out to answer, what is the statistical value and, ultimately, what that means clinically, biologically and, eventually, to a person with that disease or condition,” Cofield explained.

In order to provide the same opportunities and inspiration to her students that Best provided for her, Cofield created a scholarship in Best’s name: the Dr. Al M. Best Biostatistics Teaching Award, which will provide $1,500 toward books, tuition and travel for conferences for one biostatistics student with a desire to become an educator. Recipients also will work as a teaching assistant in at least one biostatistics class during their award year and attend 10 workshops at UAB’s Center for Teaching in Learning on topics such as best pedagogical practices, global awareness and online learning.

Cofield raised the initial funds for the scholarship by auctioning off the one-year reserved parking space she received as part of her President’s Award for Excellence in Teaching — a space in the Ninth Avenue Parking Deck, right next to the School of Public Health.

“All donations counted, and the highest got the space,” Cofield said. She lives on Birmingham’s Southside, which backs up to the residential side of UAB’s campus and she walks to work most days.

“It seemed silly to have the space sit empty,” Cofield said, so she decided to turn it into something positive. The scholarship also is open for donations.

Best, who is now VCU’s director of faculty research development in the School of Dentistry and affiliate professor in the VCU School of Medicine’s Department of Biostatistics, said he was surprised a biostatistics professor would receive a teaching award due to the field’s reputation as “dry and boring.”

“That Stacey would pull this off, however, is not” surprising, he added. “She connects with students in a real way.”

Helping students learn to tell the stories of their biostatistics research isn’t the only thing Cofield learned under Best’s tutelage. She also learned the value of the student point of view, she said, which leads to a unique understanding of her role as a teacher.

“You can tell them over and over again that two plus two is four, but if they think it’s five, then until you understand why they think it’s five, you’ll never be able to correct their thought process,” she said. “Teaching isn’t about me. It’s about them. If they’re failing to learn, that means I’m failing to teach. Every wrong answer is an opportunity for learning, and every right answer is a platform to take learning further.” 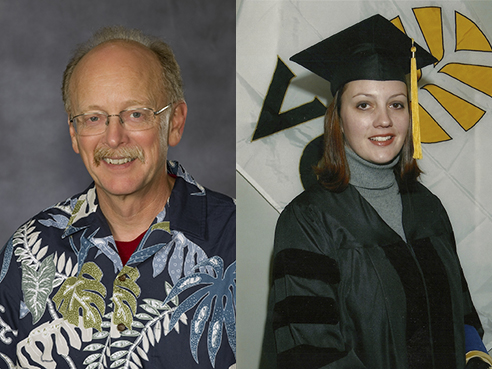 Left, Alan Best, Ph.D., Virginia Commonwealth University's (VCU) director of faculty research development in the School of Dentistry and affiliate professor in the VCU School of Medicine’s Department of Biostatistics, and right, Cofield at her graduation ceremony from VCUCofield also values teaching students to ask good questions and find their own answers — something that comes after an instructor provides the students the framework that teaches them how to learn. It’s less about getting a right answer, she says, and more about understanding why an answer is right.

“Once they can learn on their own, they will never stop learning,” Cofield said. “This is particularly key in biostatistics, where every data set will be different. There is no book in which you can look up the analysis answer; they have to know how to approach and analyze the data in the right way to deal with each circumstance.”

Interprofessional lessons
About one-third of biostatics students will continue into academia, Cofield said, teaching in the traditional environment. Another third will work in the private sector in fields such as biotechnology and pharmaceuticals, and the remainder will work for government institutions such as the National Institutes of Health, the Centers for Disease Control and Prevention and the National Science Foundation.

Regardless of profession, Cofield maintains that all will “end up teaching in some manner, even if it isn’t in a classroom,” through managing staff, providing statistical education to other employees or presenting work at meetings or in publications. Each of those things, Cofield says, is about telling the story.

“We spend a lot of time reading, writing and thinking. Knowing and recognizing when something is wrong is equally as important to knowing how to do it right. If I’ve taught students to think statistically, then they can really solve any problem and know when to seek out help when they need it.”